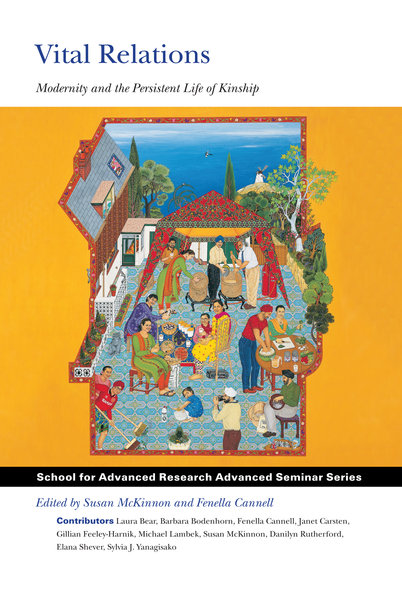 Modernity and the Persistent Life of Kinship

For more than 150 years, theories of social evolution, development, and modernity have been unanimous in their assumption that kinship organizes simpler, “traditional,” pre-state societies but not complex, “modern,” state societies. And these theories have been unanimous in their presupposition that within modern state-based societies kinship has been relegated to the domestic domain, has lost its economic and political functions, has retained no organizing force in modern political and economic structures and processes, and has become secularized and rationalized. Vital Relations challenges these notions. It will be of interest to anyone who wishes to gain a different perspective on the concept of modernity itself, and on the place of kinship and “family” in modern life.

“Vital Relations is an enlightening book with far-reaching implications for the perception of the place the study of kinship holds in sociocultural anthropology. We have been waiting for this book, and I say this not just as someone interested in the subject field, and in anthropology at large, but as a teacher. Kinship courses have for too long relied on the debates about assisted conception (new reproductive technologies) and its ramifications to make the point that kinship issues are of our times; these chapters offer a wealth of concisely argued case material across a spectrum of contexts to correct the balance. It will be a brilliant teaching tool!”
—Marilyn Strathern, University of Cambridge

“This is a fresh, thought provoking, and timely book. Vital Relations addresses the relationship between kinship and ‘modernity’ in novel ways. There has been a long-standing tendency within the discipline of sociocultural anthropology to view kinship as central to the organization of smallscale societies and playing only a limited role in modern life. The assumption has been that as societies move from being simple to being complex, kinship essentially withers away in favor of relationships organized on the basis of political and economic factors. The chapters in this volume beautifully challenge this set of assumptions. This is anthropology at its best—rich in ethnographic detail and new analytical insights.”
—Sandra Bamford, University of Toronto

“Vital Relations is a vital work. It restores to anthropology a critical focus on kinship that was erased by the self-congratulatory discourse of modernity. But in place of yesteryear’s focus on abstruse (if important) aspects of complex terminologies, this new approach tears aside the veil of disinterestedness that modern institutions such as the nation-state have constructed for themselves, and reveals a persistent emphasis on kinship in ideologically improbable places. In riveting, empirically grounded chapters drawn from a rich array of cultural contexts ranging from ghosts in Malaysian blood banks to the place of kinship in state systems and its impact on an imagined global future, the authors challenge the power of institutions to disguise their own fundamental dependence on kinship. No responsible analyst of modernity will henceforth be able to pretend that kinship has become irrelevant.”
—Michael Herzfeld, Ernest E. Monrad Professor of the Social Sciences, Harvard University

“Against the widespread idea that modernity strips kinship of its functions and confines it to the familial domain, this valuable volume argues that in ‘modern’ societies, as in ‘traditional’ ones, kinship is a vital component of ‘political, economic, and religious relations.’”
—Anthony T. Carter, University of Rochester, Journal of Anthropological Research, vol. 71, 2015