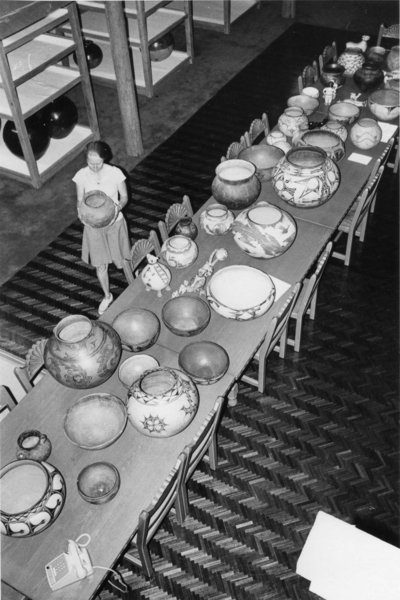 Beginning in the late nineteenth century, numerous archaeological and anthropological expeditions visited the American Southwest to document the lifeways of American Indian cultures. Thousands of pieces of pottery, weavings, baskets, and other items were collected, cataloged, studied, and stored in museums throughout the country. Concerned about this loss of material culture, in 1922 a group of Santa Fe anthropologists, writers, and art patrons organized the Pueblo Pottery Fund. Their purpose was to preserve and revive the arts and crafts of the Pueblo people by collecting outstanding examples and making them available for study and inspiration. Incorporated as the Indian Arts Fund (IAF) in 1925, the group eventually amassed a collection of traditional Southwest Native American pottery, textiles, baskets, jewelry, paintings, clothing, and other objects.

When the IAF disbanded in 1972, it deeded its entire holdings of 4,280 items to the School for Advanced Research. Under the direction of Douglas W. Schwartz, SAR had just moved into its current quarters, a gracious Garcia Street estate bequeathed to the School by Amelia Elizabeth White, one of the founding members of the IAF. Shortly thereafter, the School began construction of the Indian Arts Research Center, in which the IAF and SAR collections are now housed. The new IARC building was dedicated in 1978.