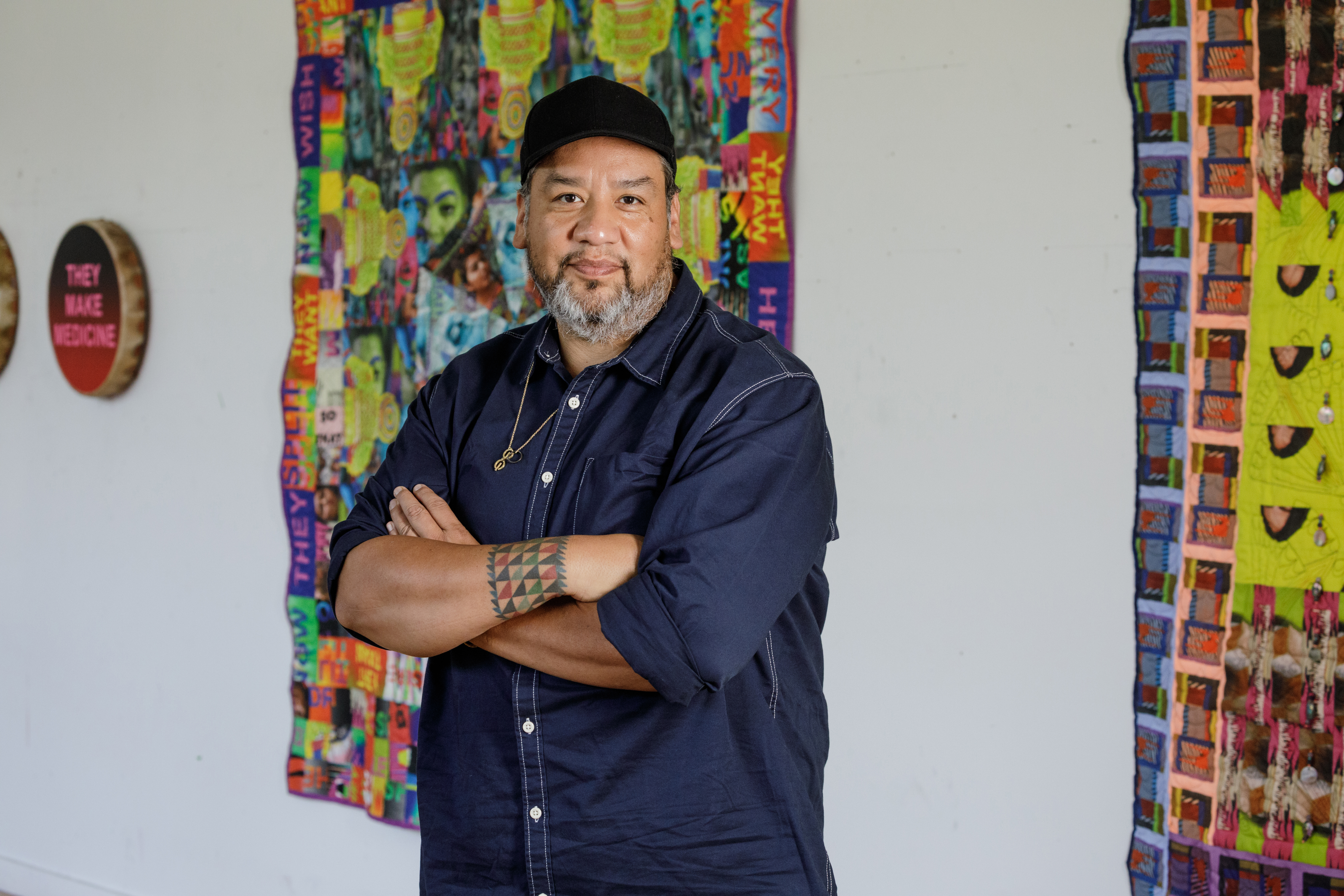 Born in Colorado Springs, Gibson grew up in places as varied as Germany, South Korea, and the East Coast due to his father’s work as a civil engineer with the US Army. In 1995 he received a BFA from the Art Institute of Chicago and in 1998 an MA from the Royal College of Art in London. There he was drawn to the club scene and, writes Jenny Held, “experienced the sense of belonging to a community.” The music spoke to him “as a young, queer, non-white man,” writes Jacoba Urist, and the culture was “as influential to his artistry as his formal training.” 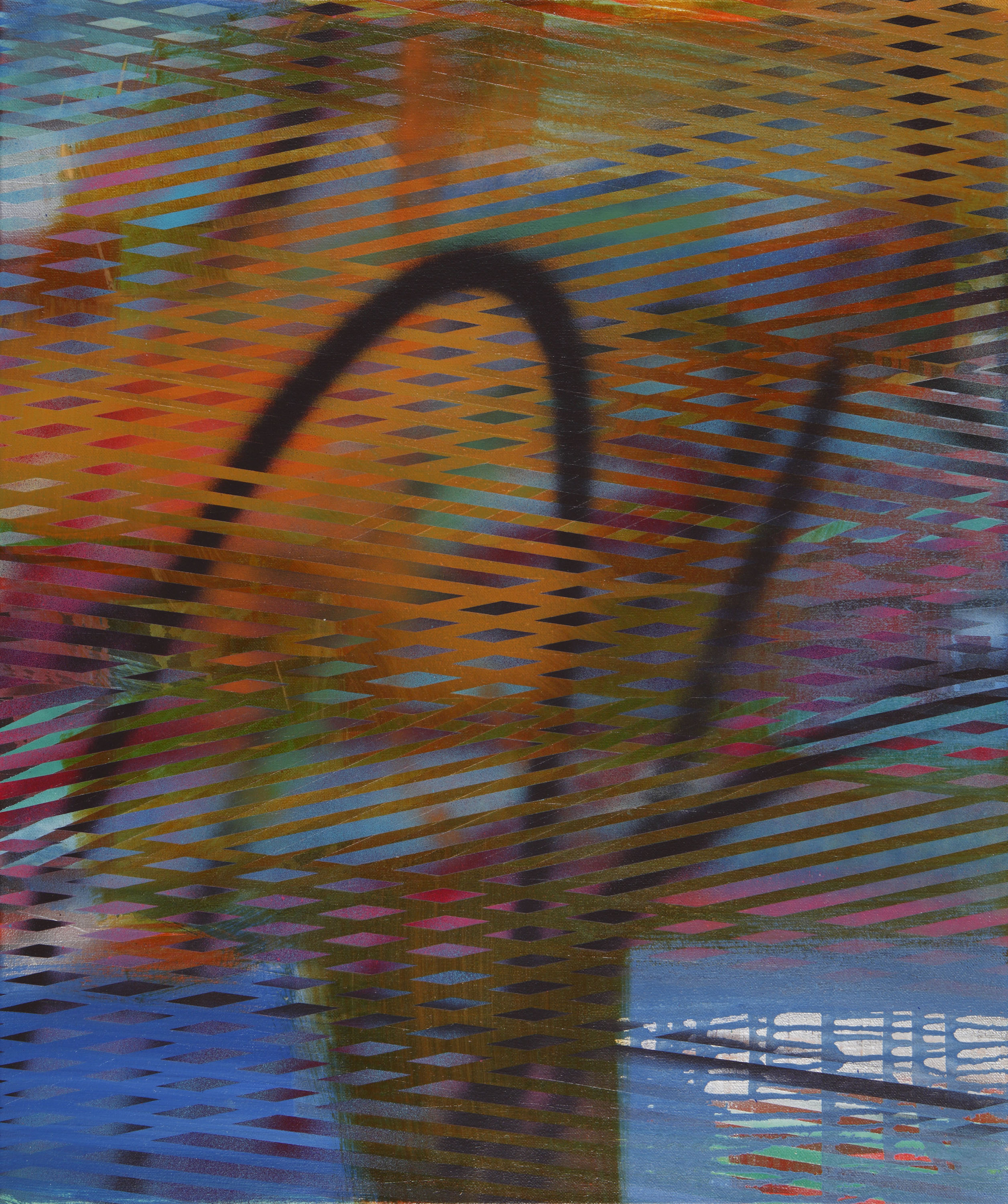 “My background is culturally diverse, having grown up abroad. I did not grow up within a Native community, and my work reflects this hybrid of cultural references and experiences. . . . I create the things that I make to get them out of my head. I hope they have a resonance and life outside of my mind, but I believe this mix of seemingly disparate references reflects the life that I live and the world that I live in. It is complex and overwhelming and I try to reflect that whole scope in my work” (SAR artist interview, 2008).

After his fellowship at SAR, Gibson described how he thought of his work “within two distinct discourses”: one of Western art history and the other of Native culture, when “Native cultural representation is based within museums, books, and stereotypical static images and descriptions. What I make merges both of these two discourses into a hybrid that visually jams this all together.” And what he makes ranges from painting to weaving to sculpture to video. According to the MacArthur Foundation, Gibson’s artworks

often involve intricately detailed and technically demanding handwork using materials such as beads, metal jingles, fringe, and elk hide. Mixed with references from popular culture, queer iconography, and contemporary political issues, the materials take on a different meaning while also calling into question the line distinguishing contemporary art from traditional modes of cultural production. . . . In resisting preconceived notions about what the work of a Native American artist should look like, Gibson is prompting a shift in how Native American art is perceived and historicized.

When Gibson first decided that he would pursue a career as an artist, he wanted to “force Native American aesthetic histories into the conversation with other aesthetic histories globally.” In the same interview on the foundation’s website, he continues, “I combined queer histories, Native American, and popular subcultures, and I merged them all together to make a new language that describes the world that I live in today.” 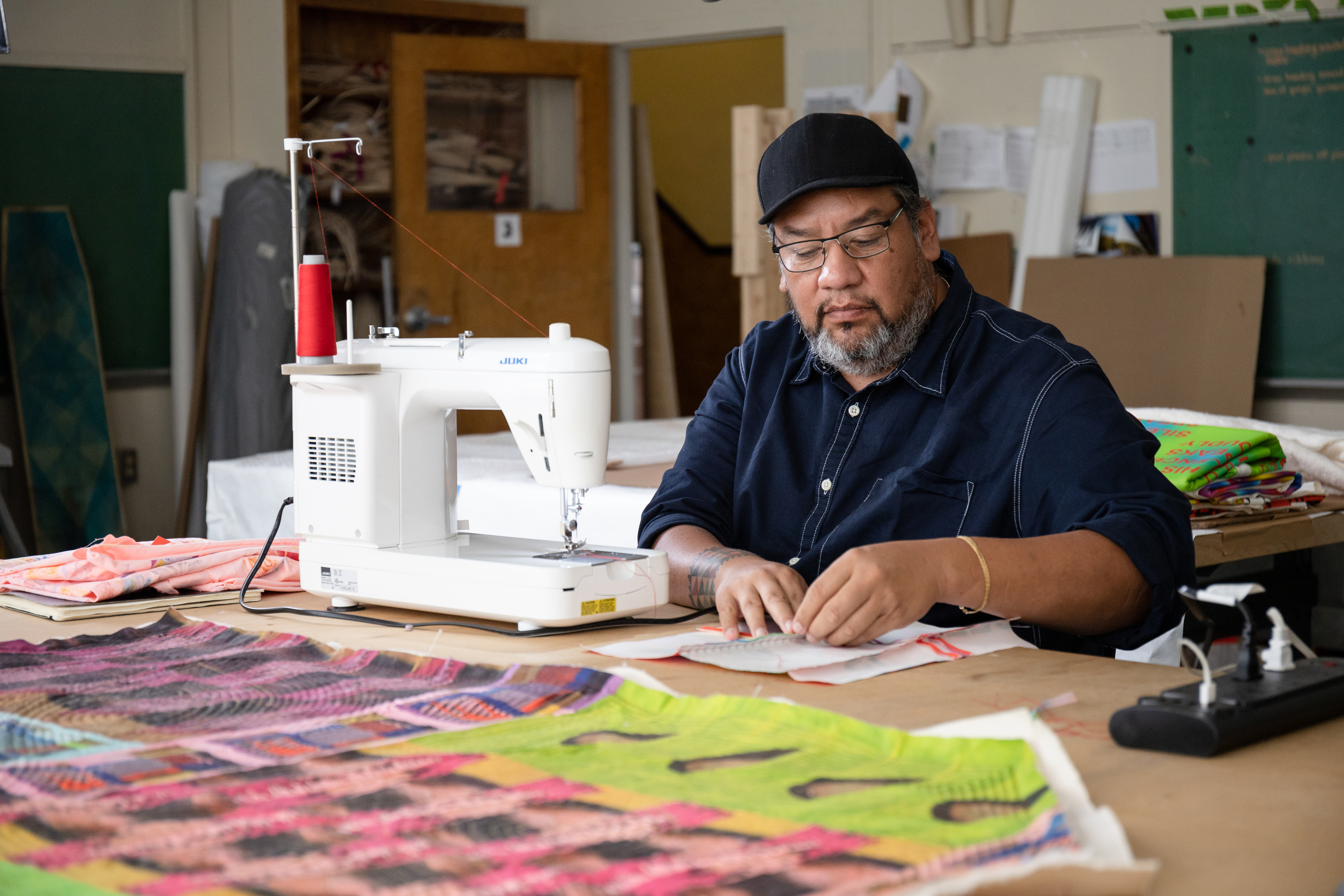 “Whether geometric paintings of acrylic and graphite on rawhide or dazzling, patterned tapestries, inspired by traditional quilting and an indigenous craft narrative, Gibson’s facility across mediums reflects a profound understanding of formal abstraction.” His “use of native beadwork, quilt-inspired craftsmanship and protest slogans is being recognized for propelling contemporary art and social dialogue forward,” writes Jacoba Urist.

What Is and Is Not Traditional

“I’m not hung up on what is and is not traditional,” Gibson once told curator and critic Lilly Wei. “I understand that tradition is evolving, responding to contemporary circumstances . . . all the other mediums and formats I’ve been using really clarified my interest in formalism, in materials.” At the end of his time at SAR, Gibson described how things like family, culture, and tradition influence his work and his interest in materials:

These things have shaped my perspective primarily through the material culture that I am aware of, being Native. Many of my non-Native peers are unaware of these material cultural references. I never directly illustrate these references but allow them to enter the work when necessary. In particular I am interested in the fact that many non-Western references are read as decorative when place in the context of Western history or art history. Within their respective cultures these “decorative” references have the ability to tell stories or provide instruction.

Like Native scholar and SAR Lamon fellow Kent Blansett, Gibson has studied the history of Native peoples in the United States, and he questions the policies that disrupted traditional practices.

It is very clear what my inspirations are and also very clear why what I do is not ceremonial, not traditional, not sacred. I was drawn to modernism because someone drew my attention to an exhibition at MoMA in 1941 called American Indian Art in the United States. I had the opportunity to visit the archives and see the correspondence between the curators. Basically, they talked about the political climate of the period, of the cold war when, suddenly, American Indians living on reservations were too communist, too socialist. It was the moment when the US Congress decided to start relocation programmes to get Indians off reservations and into cities like Chicago, Los Angeles, St Louis. I see that as a major cultural interruption. What could have happened if they had not been relocated?

Yet rather than incorporating this history into his art in any straightforward way, Gibson incorporates the disruptions: the productive displacements that bring Native material culture and Western art history into conversation. “All those lines blurred,” he told Wei, “and I worked from that blurred perspective.” 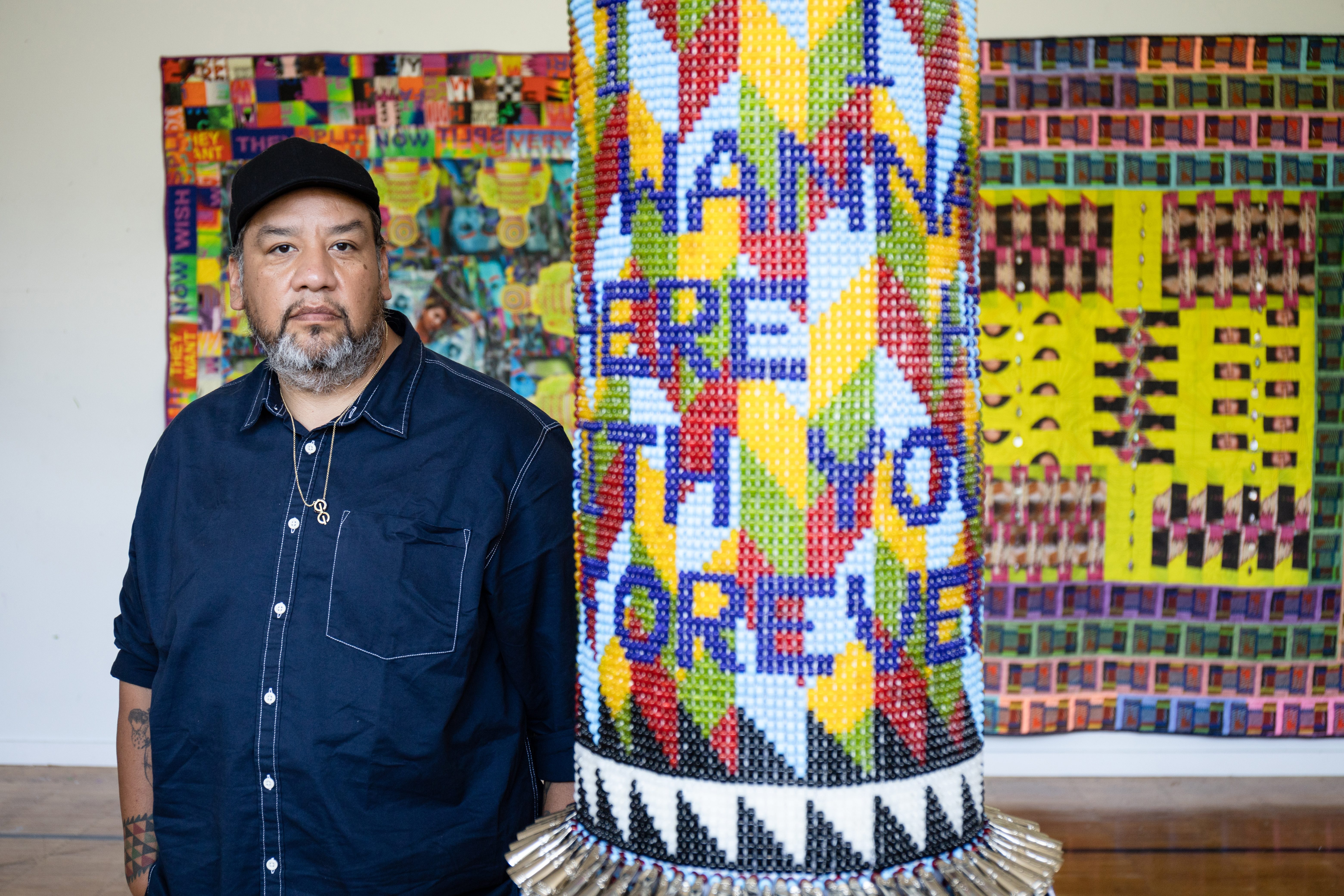 “Gibson transforms the punching bag—a common symbol of male heterosexual norms—into anthropomorphic sculptures ornamented with brightly colored beads and fringe skirts that evoke fashion, play with camp sensibilities, and speak to shifting gender identities. Many of the bags include text, pithy phrases, or song lyrics, such as ‘From a whisper to a scream’ or ‘I put a spell on you,’ that speak to societal hopes and anxieties and serve as springboards for viewers’ associations,” writes the MacArthur Foundation in their biography of Gibson.

Around 2010, Gibson created the first of his iconic punching bags. Angry and unsure of what he wanted to do with his life, he had been seeing a therapist who suggested he work with a personal trainer who, in turn, introduced him to boxing and the punching bags. At the same time, Gibson was meeting other Native American artists who made items for the powwow circuit and not only introduced him to new skills, but also told him about how beading, dancing, and drumming had saved their lives. “I realised the importance of what was worn and how it was worn, how much respect it commanded, and how it forced people to look at you in a certain way. I realised that by adorning the punching bags, suddenly there was a presence about it.”

Gibson adorns his punching bags with colorful beads, fringe, jingles cones, and statements taken from pop culture, all of which “evoke fashion, play with camp sensibilities, and speak to shifting gender identities,” writes the MacArthur foundation. In their video, Gibson says that the bags are about “the fight . . . and learning how to maybe even fight ethically, fairly, using materials that may not be our fists or may not be guns but maybe it’s more thought and words.” “As the times have become increasingly more political,” he told Urist, “people have begun projecting more politicalness into the work. . . . And then I almost am responding back . . . because I am enjoying the conversation.” 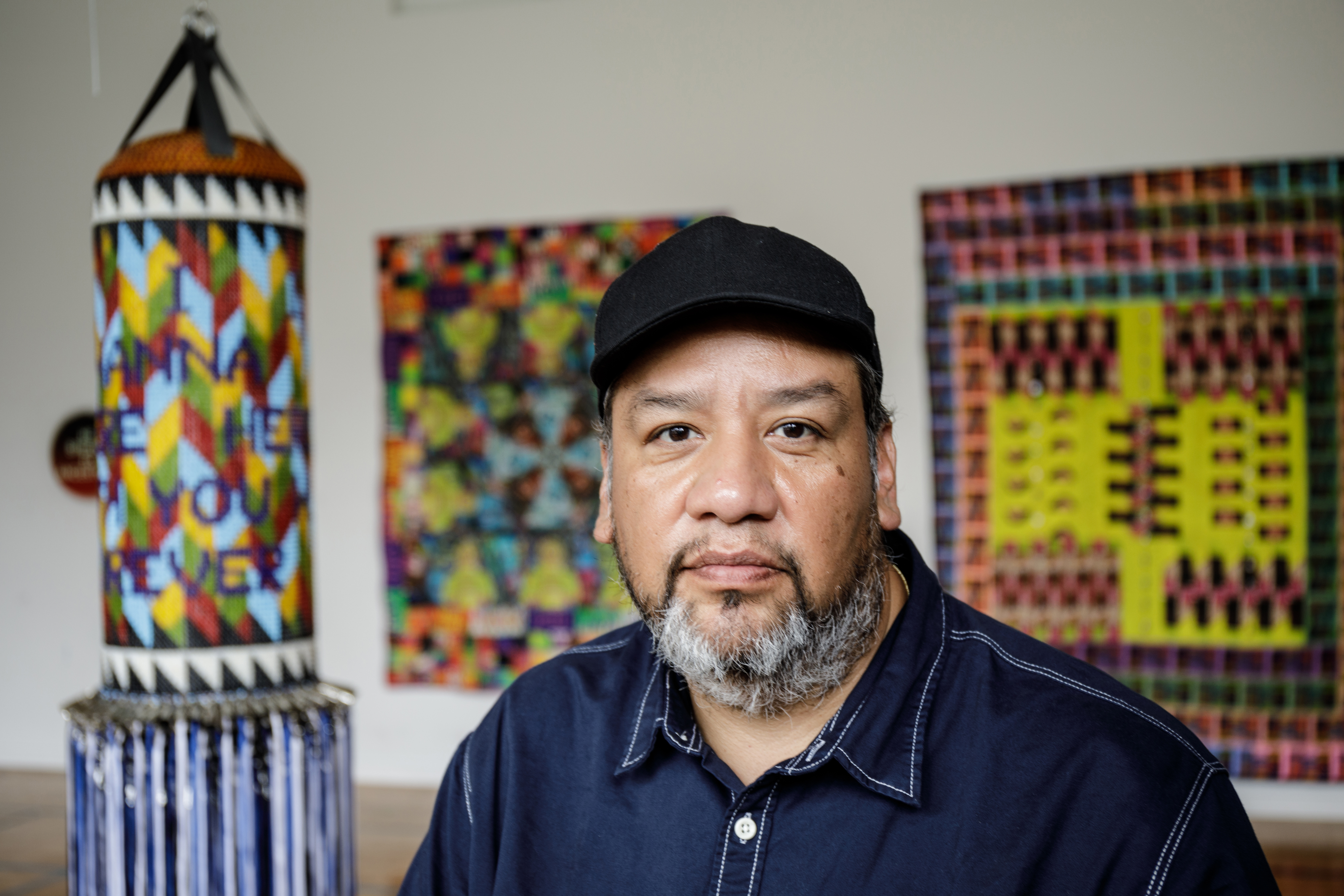 “Generally, [my work is] available to everybody to interpret and to be subjective with, but I do sometimes choose to speak specifically to other Native, Indigenous people. When I first showed the first punching bag, it was 2012, and I was shocked to see how much viewers really connected with what the punching bag represented. People have told me many stories about things that they have been challenged by, things that they have overcome, relationships, and power imbalances within those relationships,” says Gibson in his MacArthur Foundation video.

Throughout his career, Gibson has focused on the conversation, bringing disparate materials, traditions, peoples, and their multifaceted identities into dialogue. “We’ll be able to look back in retrospect and determine whether something really contributed to a larger conversation,” he says in the video. “I hope that I’ve made work that will. That’s what I’ve worked really hard for is to hopefully expand the conversation to be more inclusive and to include people like myself but also people completely unlike myself as well.”

Each year the Indian Arts Research Center at the School for Advanced Research provides three fellowships to Native American artists. This post is the fourth in a new blog series, produced by SAR Press director Sarah Soliz, that will provide an in-depth look at a particular artist and his or her work produced while in residence.

Subscribe to Voices from SAR: A Blog and receive the posts straight to your RSS feed! 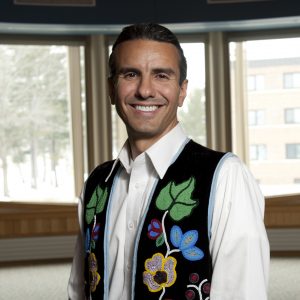