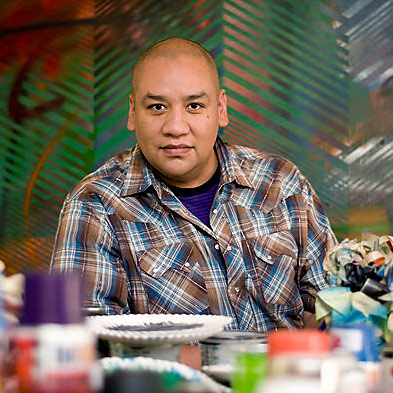 Jeffrey Gibson is a painter and installation artist living and working in Brooklyn, New York. He is Mississippi Band of Choctaw and Cherokee.

His artworks have been shown nationally and internationally at museums, galleries, and at art fairs. During the past year, his paintings and sculptures were included in exhibitions at the National Museum of the American Indian and the Santa Barbara Contemporary Arts Forum in 2007 and at the Aldrich Museum of Contemporary Art in 2006. Gibson is a 2005 recipient of a visual arts grant from the Creative Capital Foundation and completed a residency at the Art Omi International Artist Residency in 2007.

His work has been reviewed in various publications, includingThe New York Times, ArtNews, The Boston Globe, and NY Arts Magazine, and has been featured on Bloomberg Television, NY One, and New Jersey Network TV. Upcoming exhibitions include a two-person show at Dust Gallery in Las Vegas and a solo exhibition at Sala Diaz in San Antonio. Additional group exhibitions include Voices From the Mound at the Institute of American Indian Arts, Visions at Flushing Town Hall, and Cautionary Tales at 516 Arts in Albuquerque. In the summer of 2008, Jeffrey completed a print-making residency at the Crow Shadow Institute in Oregon and a residency at SAR’s Indian Arts Research Center (IARC). In 2009, he was named a recipient of the Eiteljorg Fellowship for Native American Fine Art.

Jeffrey Gibson’s project at IARC examined how artists have translated their environment into objects by their material choices and their depiction of cultural life, beliefs, and criticisms. He developed a series of drawings and paintings on paper and wood based on these ideas.