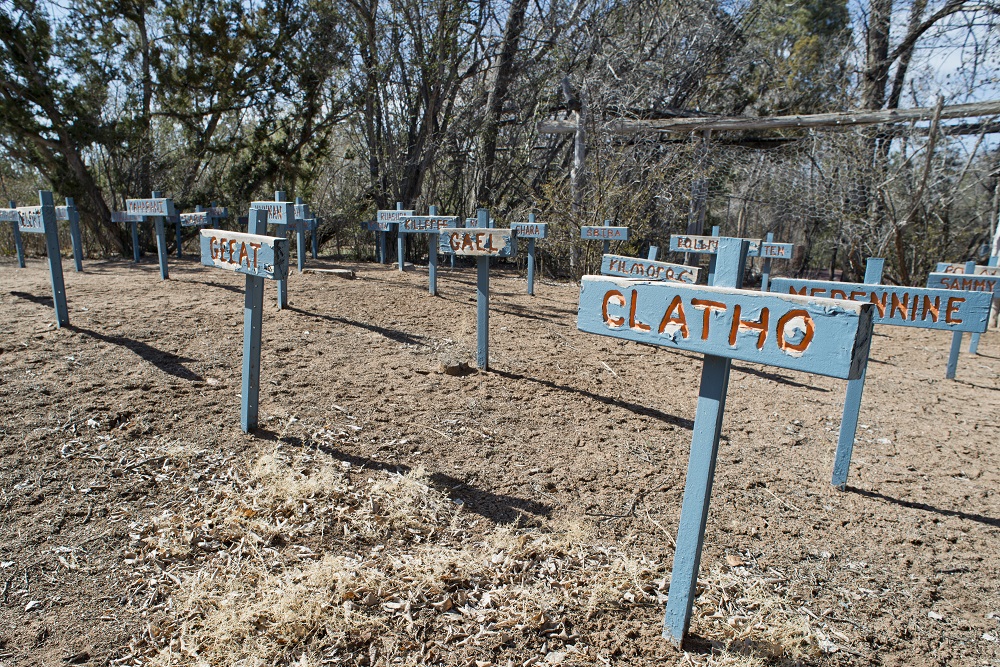 After taking a few pictures of the dog cemetery nestled within SAR’s historic campus, I was walking back to my office when my ankle turned and I almost fell down a short flight of stone steps. “Good dogs,” I murmured to no one in particular, “I’m just taking a few pictures.” Beloved companions of the White sisters—who bequeathed their Santa Fe estate, El Delirio, to SAR in 1972—these dogs have rested under markers carved with their names for the last eighty years. 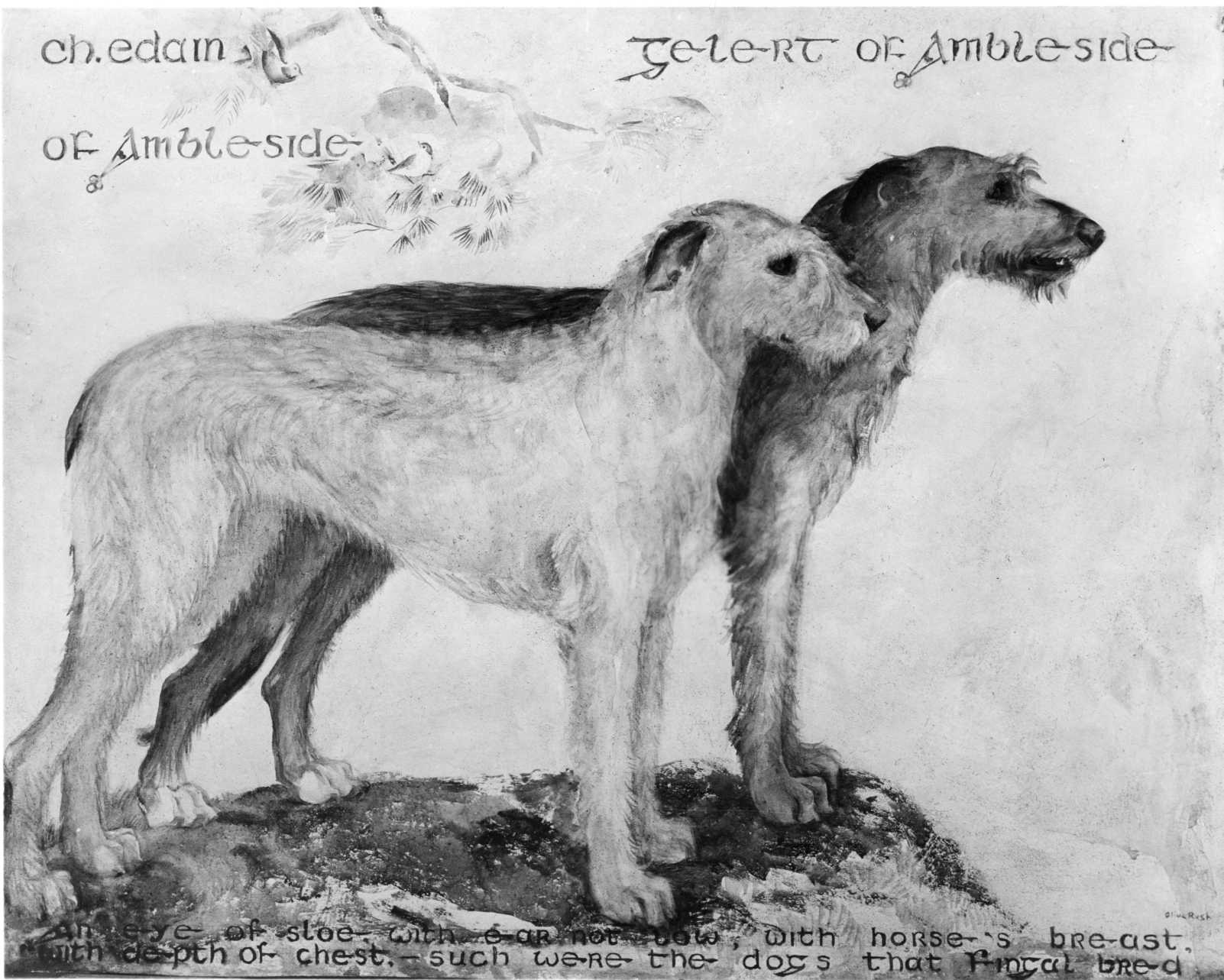 Edain and Gelert of Ambleside, postcard, SAR Archives AC20_10m. This painting of Edain and Gelert, the first breeding pair of Irish wolfhounds at Rathmullan, was commissioned by the White sisters from artist Olive Rush. 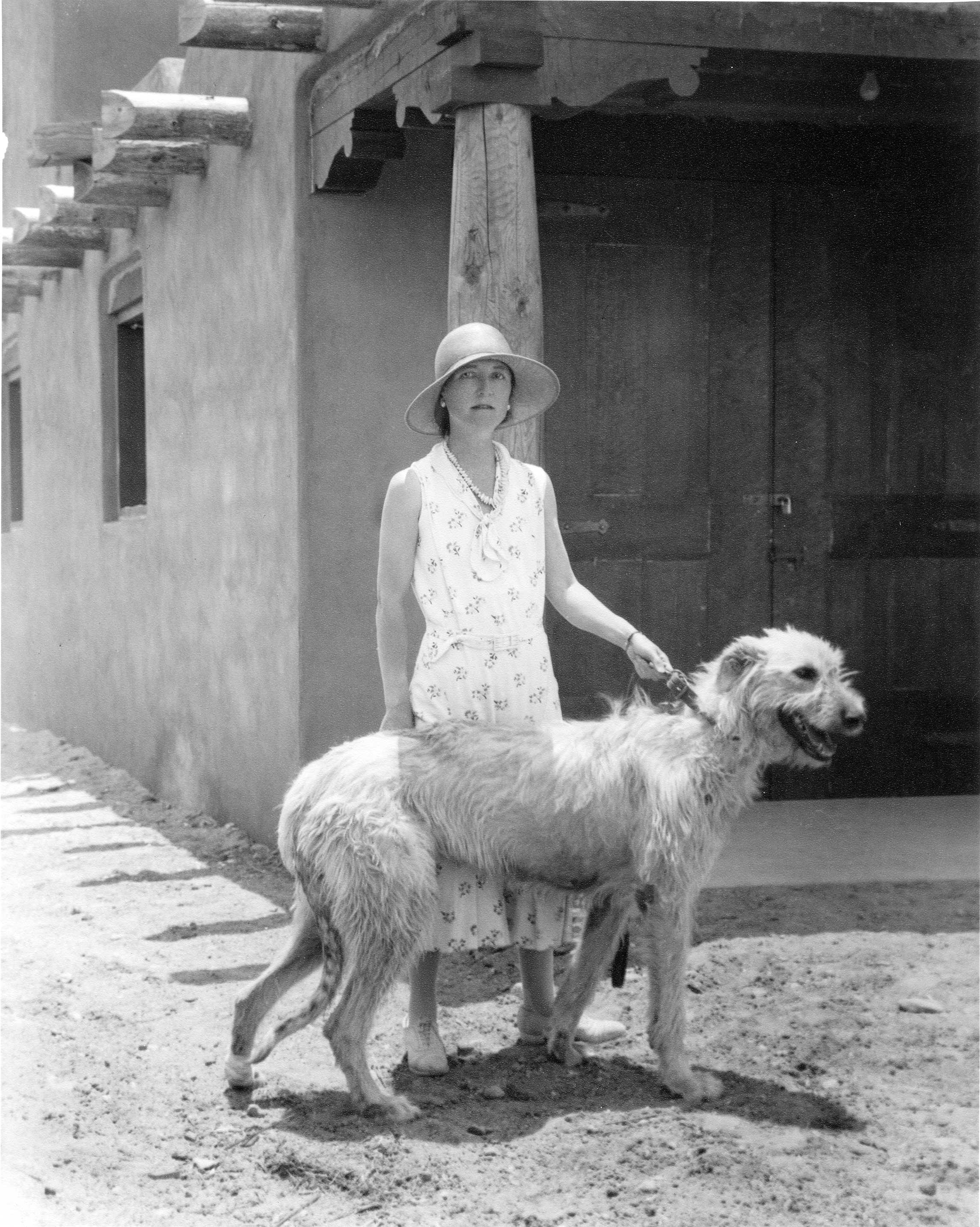 Elizabeth White and Gelert of Ambleside, ca. 1930, SAR Archives 20_02l.
Elizabeth and Martha White established Rathmullan Kennels in 1930, when they decided to start raising Irish wolfhounds and later, at Kandahar Kennels, Afghan hounds. “Most of the Afghan hounds in the US are descended from the ones they bred,” Jean Schaumberg, formerly of SAR, told the Albuquerque Journal in 2014. The dogs lived in style in a building that would become home to SAR Press. They inhabited individual rooms that each contained a raised bed covered with a canvas mattress stuffed with cedar shavings, along with windows, heat, and running water.

“Gelert of Ambleside was our first wolfhound,” Elizabeth told Arthur Frederick Jones during his visit to Rathmullan in 1934, which he described in the American Kennel Gazette.  “And what I at once learned from him,” she said, “was the unusual gentleness and trustworthiness of the Irish wolfhound with the human race. Gelert’s trust in the human race was so absolute and touching that I at once saw that he could be trusted never to bite or snap from nervous fear or surprise.” 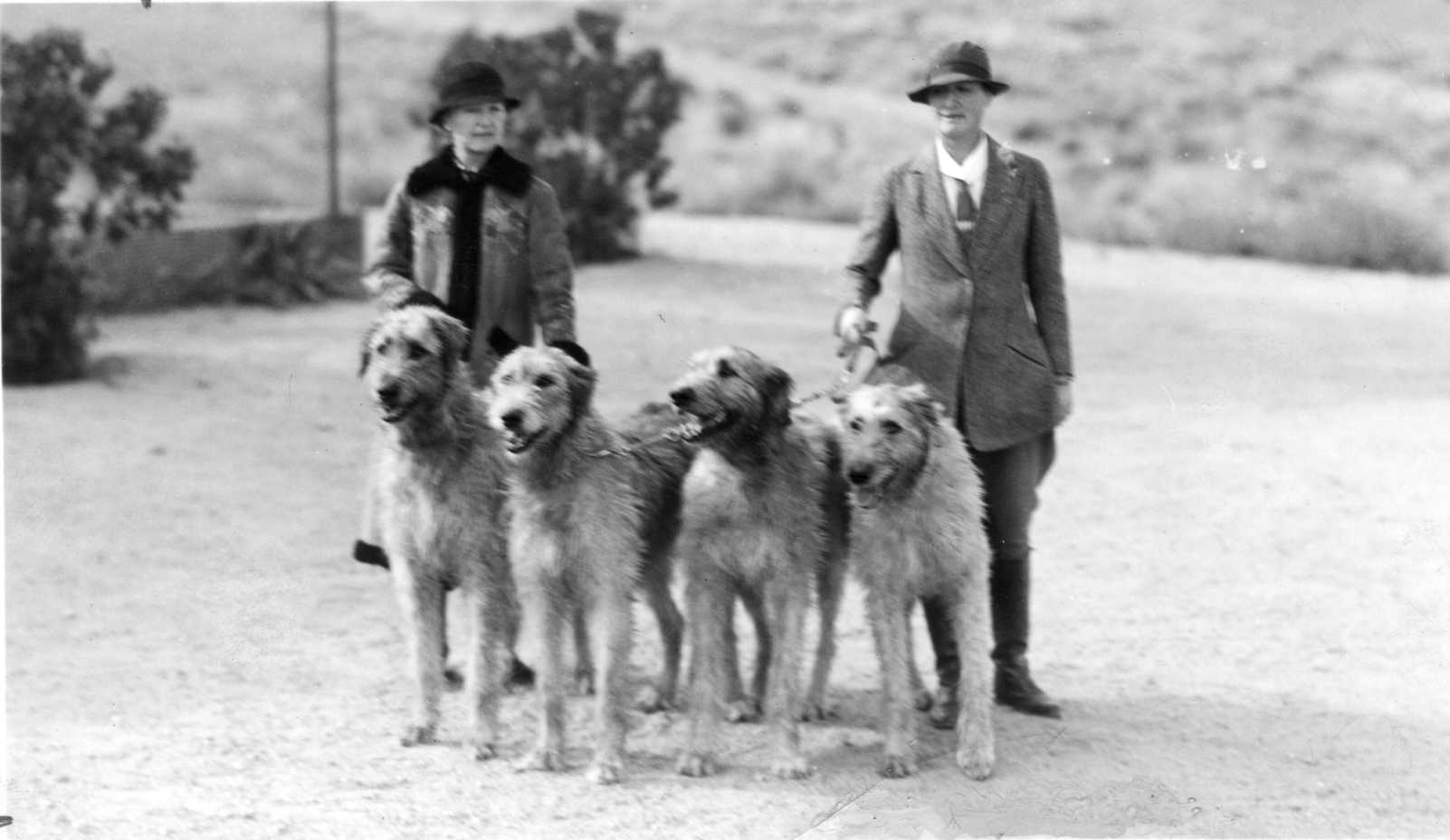 Elizabeth and Martha with their Irish wolfhounds Balbricken, Edain, Gareth, and Sagramohr, ca. 1933, SAR Archives AC20_09a.
Love and loss, however, are never far apart. In 1944 Elizabeth told her long-time nurse and companion Catherine Rayne about sickness among the dogs: “Loppy and Zara have both been dreadfully ill. . . . Loppy is now as good as new. But my darling Zara is dead and buried. She is the one I loved the best. I shall never have another like her.” 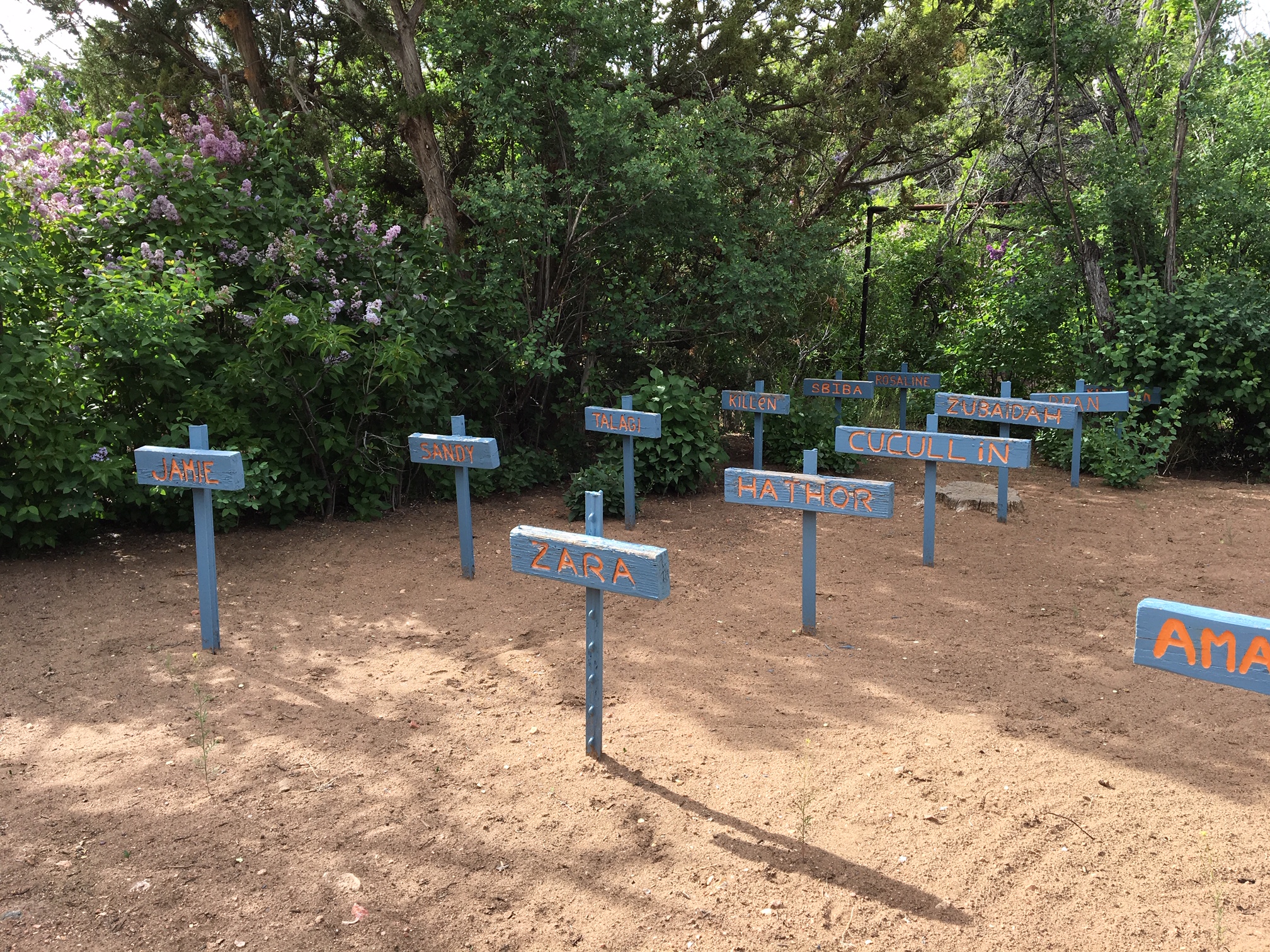 Seven years earlier, Elizabeth had lost her sister Martha and funded the first animal shelter in Santa Fe in her memory. Although not intended as such, Jones’s musings on his visit to Rathmullan—and the relationships that develop between people and animals—seem to be a fitting epitaph for the dogs of El Delirio, as well as their mistresses. “Life’s infinite dimensions grow equally from the material and the spiritual,” he wrote, “from the communion of man, and beast, and nature; from the loyalties that are a necessary part of existence.” Rest in peace. 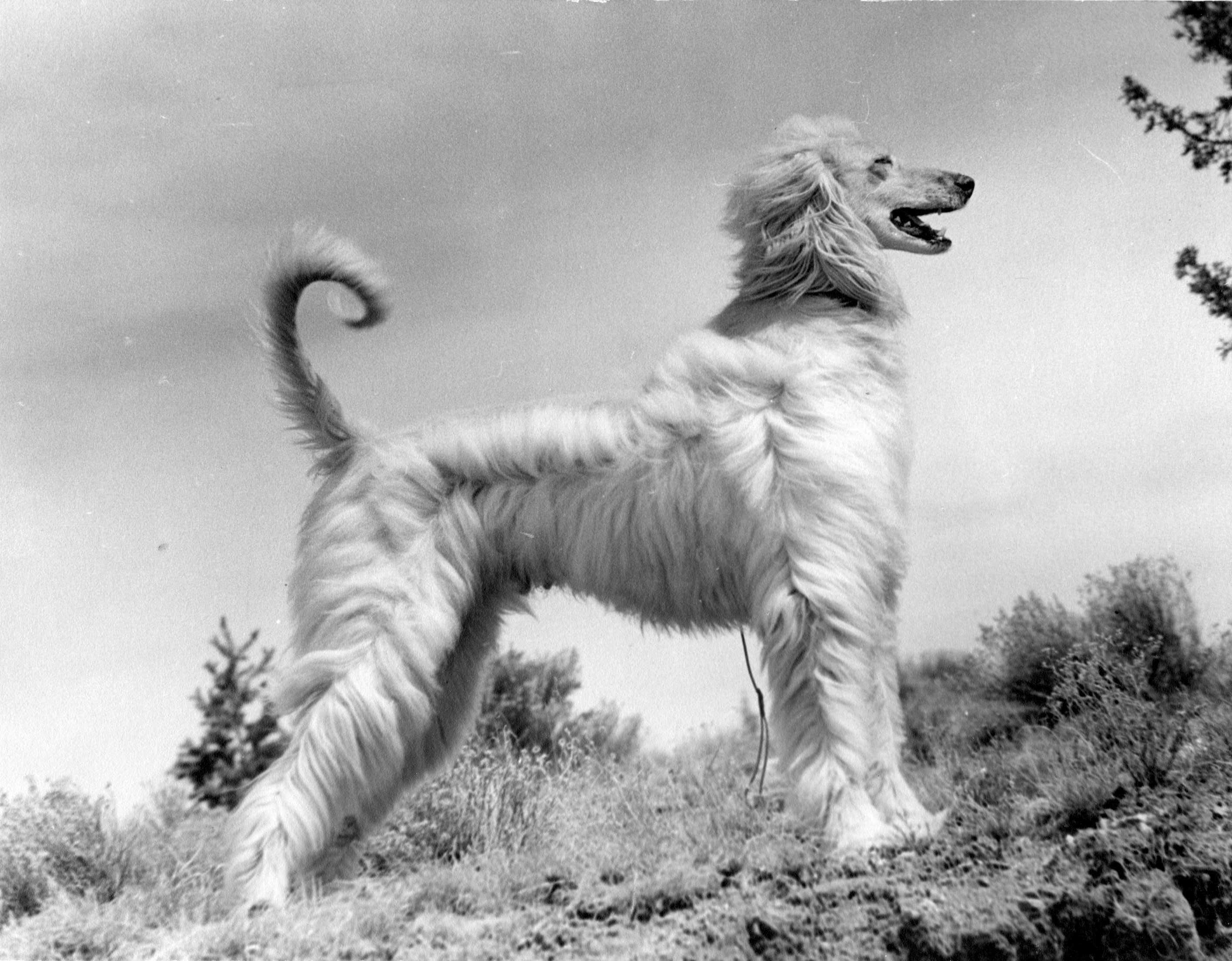 Amanullah of Kandahar, SAR Archives AC20_09t. According to The Complete Afghan Hound, the most successful show Afghan of the 1930s was Amanullah, who “picked off groups and best in shows like bones from a plate.” Not only did he reign supreme in the Southwest, he also bested all eastern competition. By 1940 Amanullah had amassed nine best in shows.

Join us on the afternoon of June 15, 2019, for “the Hounds of El Delirio,” celebrating 80 years of the Santa Fe Animal Shelter at the School for Advanced Research. The open house and community celebration includes a walking tour where you can see the cemetery, the old kennel building, and the other treasures of the SAR campus: