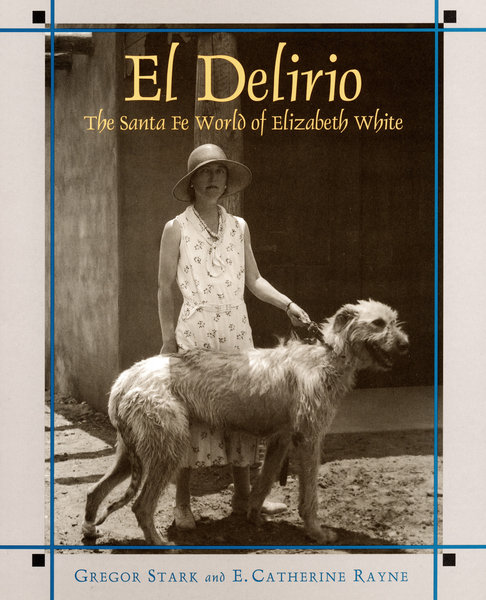 Amelia Elizabeth White (1878–1972) was born into an East Coast world of wealth and privilege. After serving as army nurses in Europe during World War I, she and her sister Martha chose to settle in the small town of Santa Fe, New Mexico. There Elizabeth became a passionate advocate for Pueblo Indian rights, an inspired patron and promoter of Indian art, and a dedicated community activist for the preservation of Santa Fe’s history. White organized several traveling expositions of Indian art and was instrumental in founding the Indian Arts Fund, the Laboratory of Anthropology, the Old Santa Fe Association, and the Santa Fe Indian Market. She also was a member of a wide circle of artists, writers, musicians, anthropologists, and archaeologists, whom she entertained lavishly at El Delirio (“The Madness”), the beautiful estate built by the White sisters in the 1920s. An eclectic combination of Moorish, Mexican, and Pueblo design, El Delirio was the setting for chamber music concerts, costume parties, and theatrical entertainments. Today it is the home of the School of American Research and the SAR Press.

Richly illustrated with many previously unpublished photographs, El Delirio offers an appealing glimpse into a fascinating period of Santa Fe history. It is also a loving portrait of the remarkable, energetic, and strong-willed Elizabeth White, described by a friend as “one of the great women of the Southwest in a very small body.”

Gregor Stark is a freelance writer living in Wisconsin. E. Catherine Rayne was nurse, companion, and friend to Elizabeth White. She lived at El Delirio from 1942 to 1972 and was director of the Garcia Street Club from 1943 to 1955.

“El Delirio offers a unique and appealing glimpse into a pivotal period in New Mexico’s history – the 1920s – when its rich culture and history were first brought to the attention of the rest of the country through the efforts of several influential women. One of these women was Elizabeth White of Santa Fe. El Delirio is the first book on this remarkable woman and the legacy that she created.”
—The End Sheet, A Quarterly Publication of Rocky Mountain Book Publishers Association Fall 1999

“El Delirio is an excellent biography of Elizabeth [and Martha] White, individuals who have long deserved a well researched account of their eventful lives… Extremely well-researched, engaging, and richly illustrated with many previously unpublished photographs, El Delirio provides readers with a feel for the world of the Whites and their friends… I highly recommend this book to anyone interested in regional history and the history of philanthropists working with Indians.”
—Nancy Parezo, New Mexico Historical Review Vol. 77, no. 3 (Summer 2002)