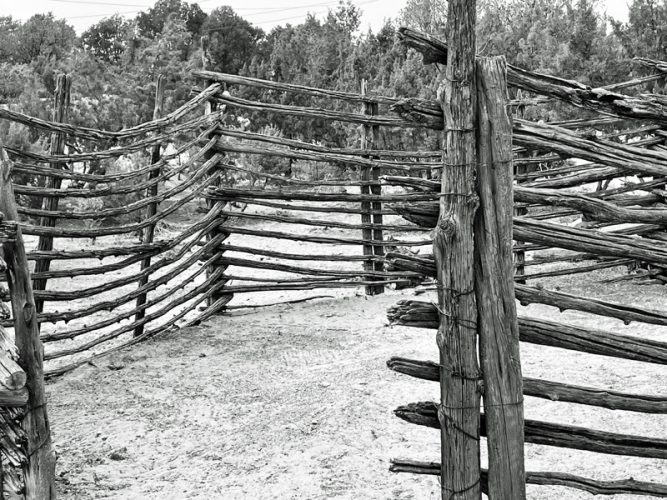 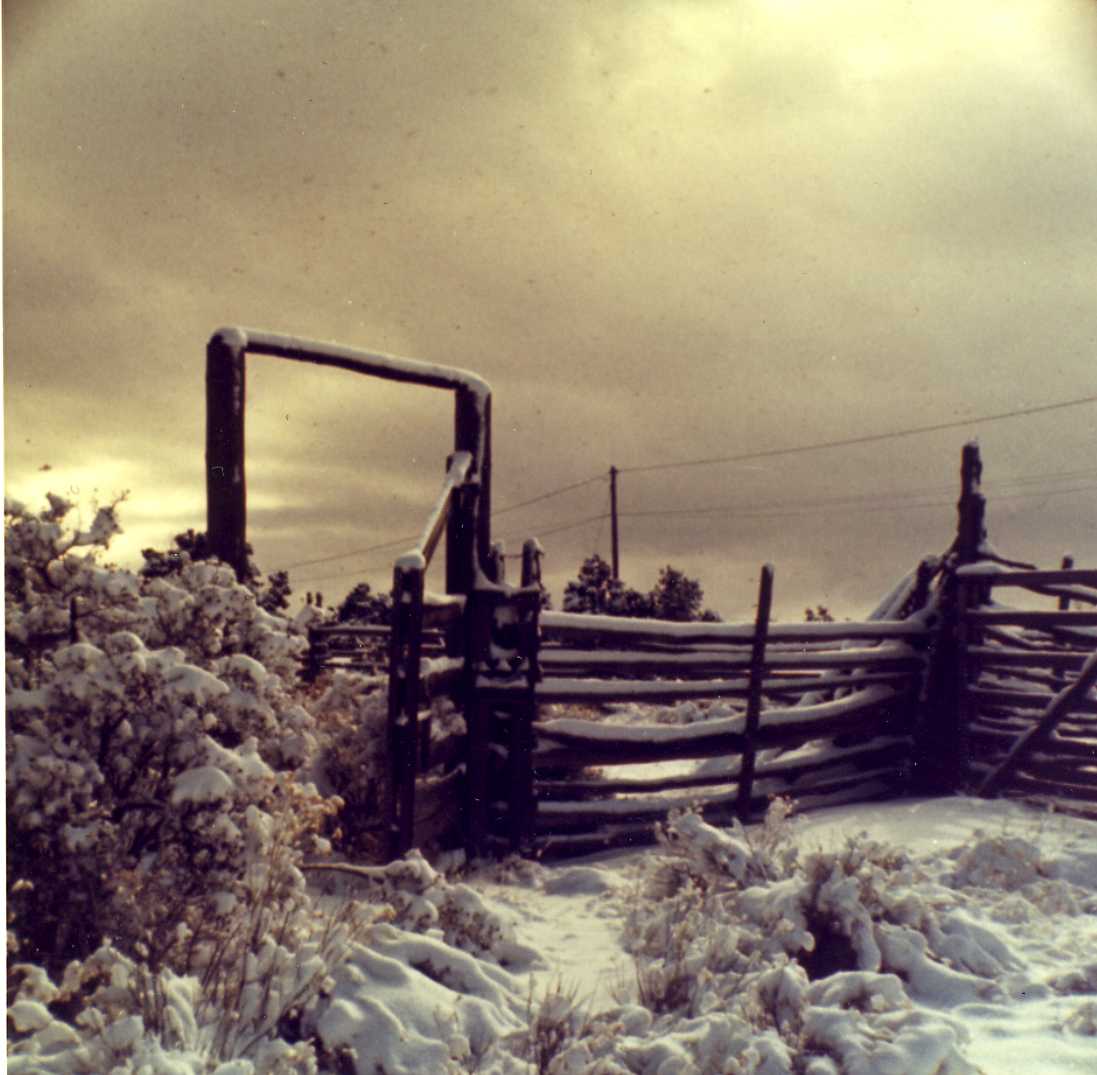 Jack Lambert corral in winter, circa 1969.

If you’ve walked or driven past the corner of Garcia Street and Camino Corrales lately, you may have noticed something long obscured by chamisa and other hardy shrubs: a gnarly corral that is probably the oldest such feature still standing in Santa Fe. This small horse corral was used by cowboy and professional outfitter Jack Lambert while he and his wife, Marge Lambert, lived in the adobe house now owned by SAR and used as a scholar residence.

Restoration of the corral, which was in a state of partial collapse, began more than 18 months ago at the instigation of SAR member and neighbor Larry Good, who said that he regretted seeing the corral in a state of disrepair when passing it on his way to and from his nearby home. With his financial support and skill at producing architectural drawings—the latter put to good use when the Historic District Review Board requested elevation drawings as part of its approval process—we applied for a permit to restore the corral and adjacent post-and-rail fencing.  The repair work itself took place in April 2022 and included clearance of surrounding vegetation and replacement of the less-than-neighborly barbed wire with plain wire along the Camino Corrales footpath.

Jack and Marge Lambert were well known and well liked figures in Santa Fe.  They were both honored as “Santa Fe Living Treasures” in 1988.  The citation reads, in part, “Jack and Marge Lambert—the cowboy and the anthropologist—stand out as the kind of memorable people who gave Santa Fe its special character.”  Marge Lambert was among the first female archaeologists to work in the Southwest and the first to serve as archaeology curator at the Museum of New Mexico.  Among other projects, she worked at Edgar Lee Hewitt’s excavation of Chetro Ketl and other sites in Chaco Canyon in 1929. 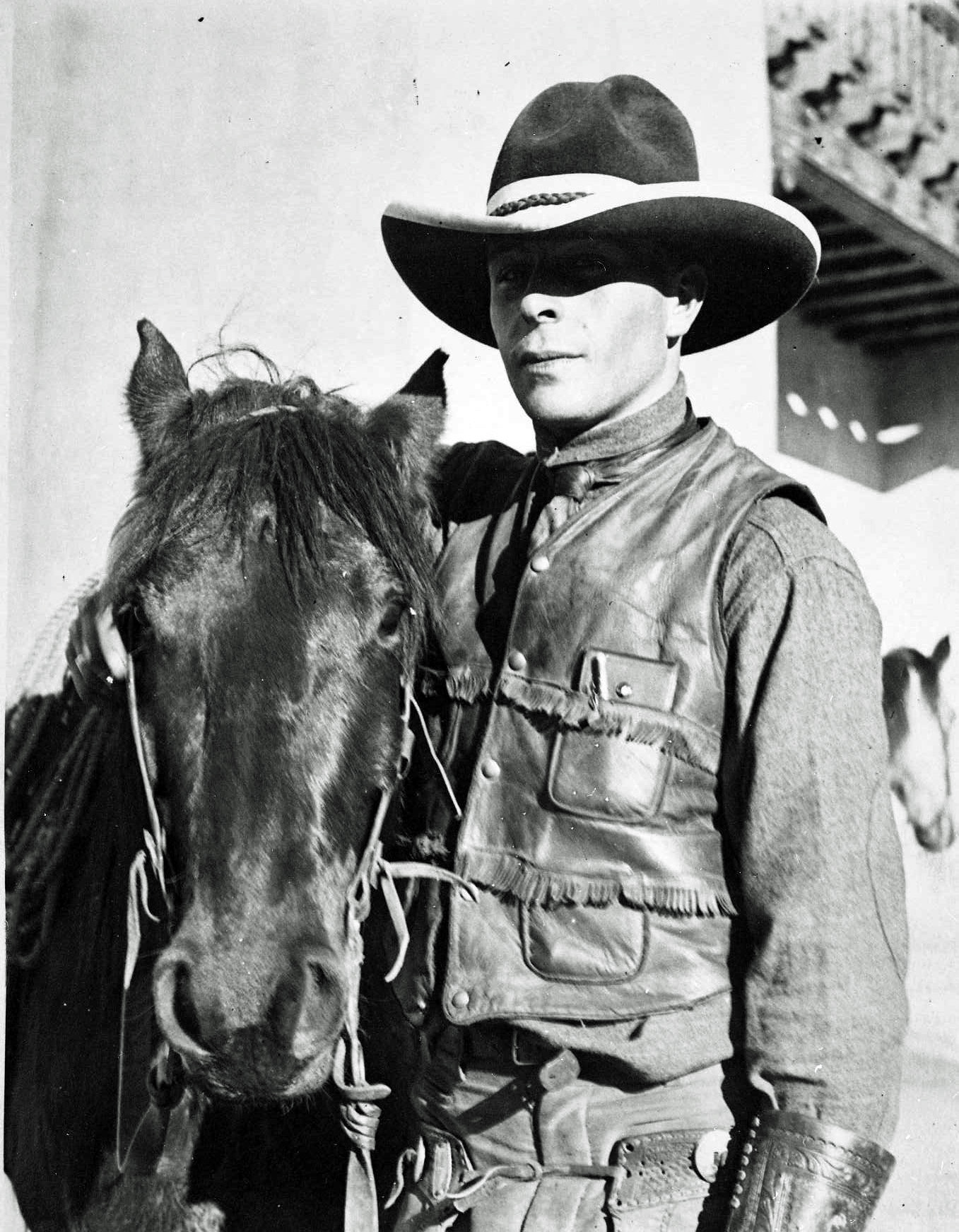 Jack Lambert was an Oklahoma-born cowboy who worked in Wyoming and Utah prior to settling in Santa Fe, where he ran a dude ranch and led visitors on adventures to places like Canyon de Chelly. In his later years, Jack managed the White Sisters’ estate on Garcia Street, prior to its transfer to SAR in 1972.  A 2021 study of the corral and its surroundings by the architectural historian John W. Murphey suggests that the original corral at Lambert’s Garcia Street house was considerably larger than the existing enclosure.  Murphey writes: “[The corral] likely worked as a round pen, taking horses from the larger corral and moving them through a cut at the southwest corner.  Inside the small enclosure, the cowboy could saddle the horse to work on training, as the small space and high rails gave control to the handler.”

SAR is pleased to see this modest element of Santa Fe history renewed and made more visible to the public. The work that went into this reflects our commitment to preserving the El Delirio campus and its colorful history even as SAR pushes its scholarly and artistic programs to the forefront of contemporary creativity.