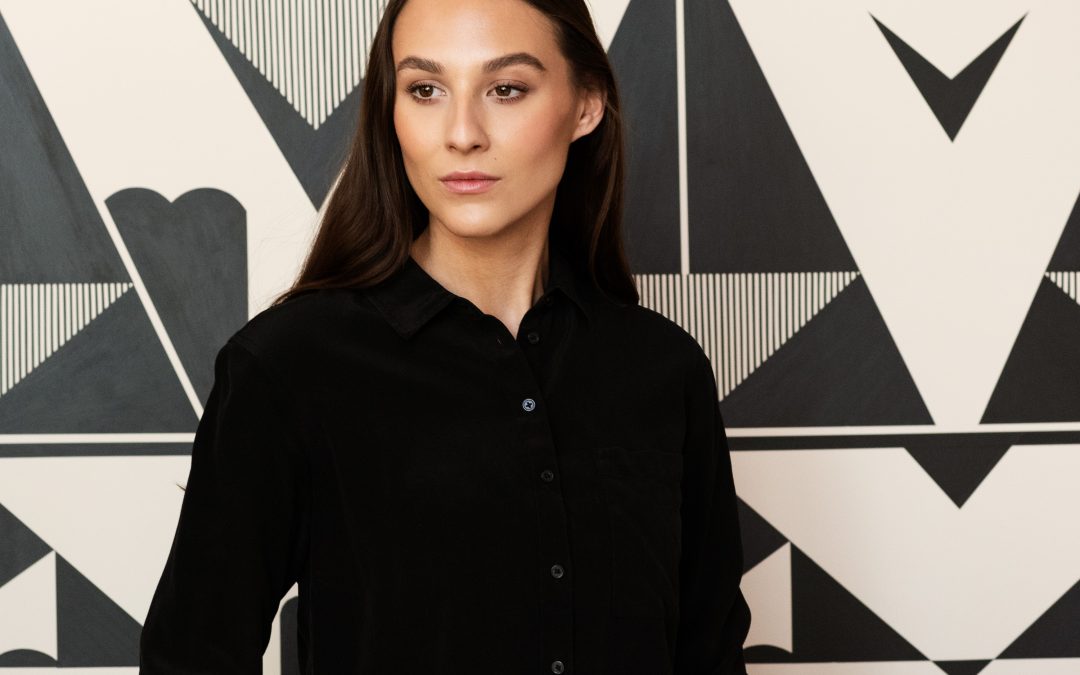 How does a self-proclaimed perfectionist make sense of the often messy process of making art? Northern Cheyenne printmaker and painter Jordan Craig tells us that even when the creative journey is challenging, a work’s flaws may become integral to the artist’s achievements. 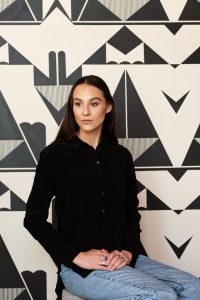 Jordan Craig is a Northern Cheyenne artist based in Oakland, California.

She was SAR’s 2018 Eric and Barbara Dobkin Native Artist Fellow and is a 2019 Institute of American Indian Arts Artist in Residence in Santa Fe, New Mexico.

The summer before graduating from New Hampshire’s Dartmouth College, Craig took her first printmaking course, reports Lauren Pinchuk, and it changed her life. She had been an art student with a concentration in painting, but the course altered her artistic trajectory, and since then she has studied printmaking and bookbinding in studios around the United States and Europe. As the 2018 Eric and Barbara Dobkin Fellow at SAR’s Indian Arts Research Center, Craig brought together her interests in printmaking and painting. At the IARC, she studied Native pottery for the first time, an experience that also changed her way of working and broadened her perspective on what she could do in her art. “My project became so much bigger than me,” she told Pinchuk. As she explained to Michael Abatemarco, “I had concrete things to look at as opposed to just thinking of things in my head. That was a huge transitional moment for my work.” 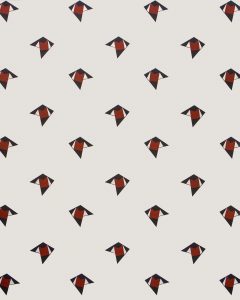 This painting was the first Craig finished at SAR, and it was inspired by a ceramic water jar created by Acoma potters Lucy and Dolores Lewis in 1992 (not in the IARC’s collection), along with several ladybug encounters Craig had during a residency in Cork, Ireland; at home in California; and upon arriving in Santa Fe. Craig began by drawing and abstracting the shapes she wanted to use from the jar, then playing with pattern and repetition on her computer. She projected her design onto a prepared canvas and then taped off sections to solve the “puzzle” of creating each individual piece of the pattern. The finished painting contains about twenty layers of hand-mixed paint. “This was one of my favorites,” she says, “just because it links really closely to what I’ve been working on, compared to some other paintings I did here, which really pushed my comfort zone. So I think this was a nice little transitional piece.”

But what is the relationship between the “concrete thing” and “just thinking of things”? Craig describes her process of making this connection as “almost inhuman,” yet it allows her to “separate the works from the original pots and also give respect.” The pots “are so human and so alive and breathing, and all the imperfections make them what they are. They’re handmade almost perfectly.” As a designer, she extends this perfection by adapting their designs to a digital environment and creating a “digital interpretation.” As an artist, using tools like computers, projectors, and tape, Craig makes “a different type of work” that both acknowledges and moves away from the “original humanness” of the pot. “It’s a different way of thinking about it.”

This is a very new way for me to work. And I could do this work without [a computer], but I could make way more patterns with it. . . . I learned after going to a pottery course where I was just having to freestyle something right away. It was really hard for me because I just do not work like that. I like to have a full vision of what it looks like, and I’m able to do that on a computer. So even when I can design something, I could project it to the canvas and I already know what it’s going to feel like in terms of size and dimension and all that. So the digital work is fun for me.

Craig talks about designs and paintings as two sides of the same coin, both the same and not the same. The way she brings them together—her interest in design and painting, the computer and the hand—catalyzes the “happy accidents” that produce pieces like Teeth. 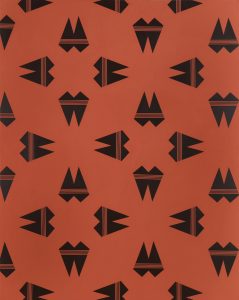 Craig began this painting with about three coats of hand-tinted gesso applied in alternating horizontal and vertical layers, which she then sanded using progressively finer grits of sandpaper. She repeated this process three or more times, including extra rounds of sanding to get the surface as smooth as possible. Before she even began painting, she created the entire design on her computer and then projected it onto the canvas. She used tape and stencils to outline the design on the canvas over thirty times before starting to paint with colors she mixed herself. “I don’t even know if this red piece is necessarily aesthetic. It’s kind of odd. And I accept that; it is very perfectly made in terms of layout and that’s aesthetic. But then thinking about the idea of teeth and why are these teeth repeating, it leads to a lot of questions. . . . Given that it’s probably one of the simplest paintings, two colors, it was the most complicated to make.”

Craig completed thirteen large-scale works on canvas during her three-month artist fellowship at SAR. One of the last was also a piece she identifies as one of the most difficult. Teeth was inspired by a ceramic water jar made by Mary Histia in 1931. Craig was attracted to its “graphic-ness”: the colors and details in the jar’s design; the repetitive, geometric, but also “flowy” pattern of the flowers. Originally, she had intended to incorporate the flower shapes into her painting, but once she completed the first part of the design, the “mountainy” shapes, she thought, “It’s done.” The piece, however, had other ideas. 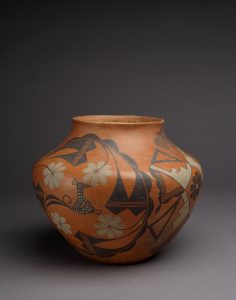 The exterior of this Acoma Polychrome jar is covered in red slip and painted with a black and gray pattern containing birds and flowers, along with some geometric elements. The interior is red and unpolished. According to participants in the Acoma collection review, Histia made the jar from traditional white clay and painted a roadrunner into her design. This piece is unusual in that Histia was known for creating black-and-white designs, rather than the orange-red of this jar. She is, however, known for her circular designs with representative and geometric elements coming out of the swirling patterns. Kenneth Chapman purchased this jar for the Indian Arts Fund on June 22, 1940. The seller is unknown, but he may have bought it from Histia herself since he states a precise date of manufacture.

As Craig started the painting, she felt that the work had been “so easy.” The background sanded well, and the color was rich. Craig finished the base in one evening and then returned the next morning to touch up a spot of color. But the sanding process changed the way the paint behaved on the canvas, and “it became a splotch and then it became a bigger splotch and then it became a huge splotch and then the splotch started dripping everywhere.” She tried to salvage the painting, but ultimately, “it went outside for a day or two, literally out of the studio. . . . Then I found it on the ground the next day and I was like, ‘Yeah, you deserve that.’ So I started over on a painting that my mom had prepped which had white paint on it.” Eventually, Craig realized the new canvas was not going to work either: “That was just like a natural disaster because it looked really bad.”

With a fresh canvas, Craig began many more hours and cycles of painting, sanding, and taping. “I wanted it to be better than the original because I was putting—I don’t know—sixty hours into redoing it.” But another painting fell onto her working canvas and left a clear mark. She wasn’t even sad: “I just started taking off all of the tape that was like six hours of taping and then resanded it, repainted the whole thing, resanded, repainted it again, resanded it. My stencil got a little oil paint on it. These are things that just don’t happen to me, and they didn’t happen in the other paintings, but yeah. So oil paint got into it so I sanded quickly and then repainted again, resanded again, repainted again.” The result was Teeth.

And I really like it because it’s not necessarily the star piece of my residency, but it compliments all of them so well. And it’s like the glue that helps them all talk together. So I’m donating it because of all of the lessons I learned. And it’s just like I can’t hold onto this piece. It would haunt me, teeth. Also it taught me I need to be strong. . . . I need to take responsibility, and then also it was a huge lesson on so many fronts. . . . The lesson is just being patient and not blaming myself, having good feelings about a painting, not being mean to a painting. This sounds very funny, but it’s so true. I was so mean to it—I left the [original] painting outside for three days!

Craig describes herself as “a bit of a perfectionist”: “You can totally see that in my work, but there is a human element as well. You can see brushstrokes, you can see imperfections.” And it’s those almost perfect imperfections that form the link between artwork and design in Craig’s paintings. They infuse her work with a depth of tradition and vitality of interpretation. None of the paintings Craig worked on at SAR were so much a “direct translation” of older pieces as a “pattern, like a puzzle,” for her to figure out how to re-create. “This was a huge experiment in terms of medium. It is a lot about the process. I mean, if you just slapped on red paint, it wouldn’t look like this.” 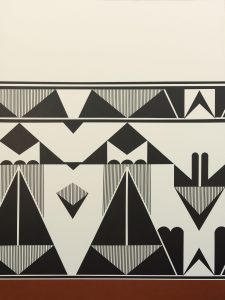 A New Home with Red Base, Jordan Craig (Northern Cheyenne), 2018, acrylic on canvas, 48 x 36 in. In the collection of La Fonda on the Plaza. Photo by Garret Vreeland.

Craig’s work has found a home in the IARC collection and in one of Santa Fe’s most iconic hotels, La Fonda on the Plaza. Craig’s A New Home with Red Base, inspired by a ceramic water jar created by Laguna Pueblo potter Evelyn Cheromiah between 1980 and 1989 (SAR.1994-4-535), now hangs front and center on the hotel’s first floor. Jennifer Kimball, chairman of the board and curator-in-chief for La Fonda, said she was thrilled when then-director of the IARC, Brian Vallo, called and alerted her to Jordan Craig’s talent. Kimball met Craig and learned about the painstaking process she goes through for each work of art she creates, from the dot paintings that evoke calming landscapes and horizons to the larger pieces that are graphic interpretations of her favorite pots in the IARC collection. Kimball was so struck by Craig’s work and process that she bought several pieces for the hotel, as well as her personal collection. Kimball has been adding to La Fonda’s prestigious art collection, which was begun in the 1920s when Mary Colter commissioned and curated art from Gerald Cassidy, Paul Lantz, and many others. “I feel it is so important to collect young and talented Native American artists,” she adds, “not only to keep La Fonda’s art collection current, but to support these artists into the future.”

Learn more about Jordan Craig and her process in SAR’s artist video profile:

Unless otherwise attributed, all quotations come from interviews with the artist at the IARC, May 25, 2018.
Each year the Indian Arts Research Center at the School for Advanced Research provides three fellowships to Native American artists. This post is the second in a new blog series, produced by SAR Press acquisitions editor Sarah Soliz, that will provide an in-depth look at a particular artist and his or her work produced while in residence.

Subscribe to Voices from SAR: A Blog and receive the posts straight to your RSS feed!