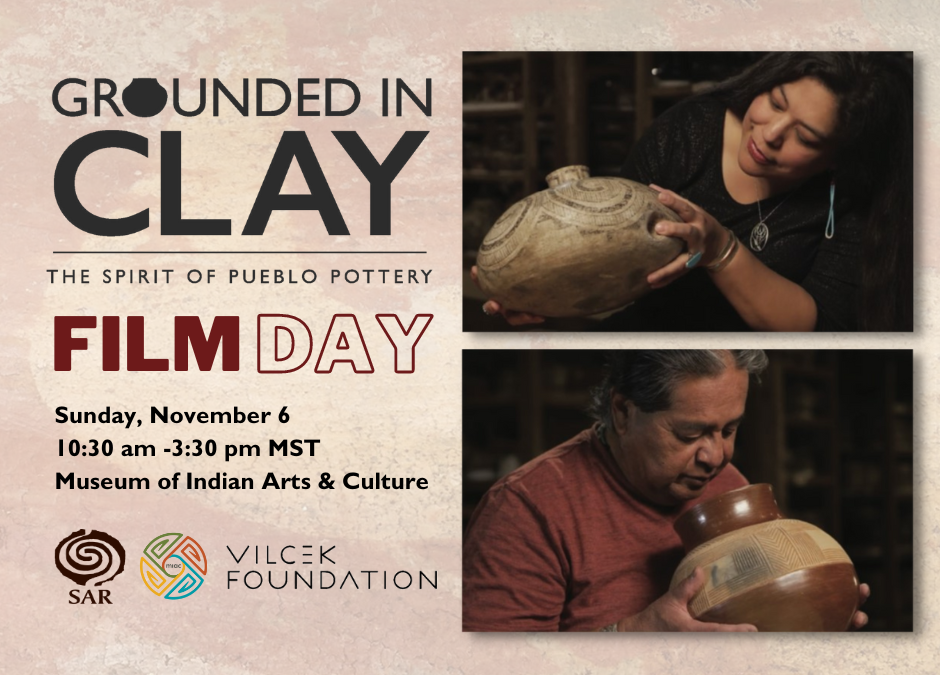 Sunday, November 6 was Film Day at the Museum of Indian Arts & Culture (MIAC). The School for Advanced Research (SAR) and MIAC teamed up for a day of screenings, panels, and demonstrations in celebration of Pueblo Pottery. It was a well-attended event and an incredibly rewarding experience.

The day opened with the premiere of the Grounded in Clay: The Spirit of Pueblo Pottery documentary; MIAC’s O’Keeffe Theater was packed to capacity for the highly anticipated event. The short film, produced by New Mexico PBS in conjunction with the exhibition of the same name, takes a closer look at the relationships between Pueblo people and pottery. Following the screening I moderated a discussion panel with Pueblo Pottery Collective members Evone Martinez (San Ildefonso and Cochiti Pueblos) and Albert Alvidrez (Ysleta del Sur), both of whom are featured in the film, and director/producer Adam Shaening-Pokrasso. Martinez, Alvidrez, and Shaening-Pokrasso offered thoughtful insights into the making of the film and spoke to the larger themes of the exhibition.

The second film of the day was the 1990 short Daughters of the Anasazi. The film, written and directed by John Anthony, features renowned Acoma potter Lucy Lewis and her daughters Emma Lewis Mitchell and Dolores Lewis Garcia. Daughters of the Anasazi played on a loop for two hours, providing plenty of opportunity for visitors to wander in and watch the pottery-making process from start to finish. Concurrently, Dolores Lewis Garcia and her niece, and Pueblo Pottery Collective member, Claudia Mitchell, gave a demonstration in MIAC’s lobby just outside the theater’s doors. The juxtaposition of the film with the demonstration highlighted the strong, unbroken, tradition of pottery making within the Lewis family; Dolores Lewis Garcia works as efficiently and precisely now as she did thirty-two years ago, and Claudia Mitchell still uses the tools passed down to her by her mother, Emma Lewis Mitchell.

Film Day ended with a double feature celebrating San Ildefonso potter Maria Martinez and the family legacy she inspired. The 1972 National Parks Service’s (NPS) documentary Indian Pottery of San Ildefonso and Our Quiyo: Maria Martinez, made by emerging filmmaker Charine Gonzalez (San Ildefonso), played back-to-back to close out the day. Gonzalez, the great-great-great-granddaughter of Maria Martinez, spliced footage from the old NPS documentary into her new film that honors Maria Martinez’s artistry and family legacy. Old and new footage of various steps in the pottery making process played side by side in split screen in parts of Gonzales’s film to emphasize the ties between the practice shared by Maria Martinez and her son Popovi Da in the older documentary and the current generations of Martinez family potters. While the process is little changed, members of the Martinez family have found ways to put their stamp on an old tradition. At the end of the screenings, Gonzales took to the stage with her grandmother, respected potter Barbara Gonzales (San Ildefonso), to discuss the ways the Martinez family honors Maria’s legacy and carries it with them into the future.

The day’s activities were sweetened by homemade pies, breads, and Indian tea made by Flo Yepa of Sun and Fire Catering.

Watch Grounded in Clay: The Spirit of Pueblo Pottery on pbs.org.

Film Day was, in part, a Grounded in Clay programming event. Grounded in Clay events are held on the first Sunday of every month through February 5, 2023. To learn more about the remaining events, visit SAR’s event calendar.