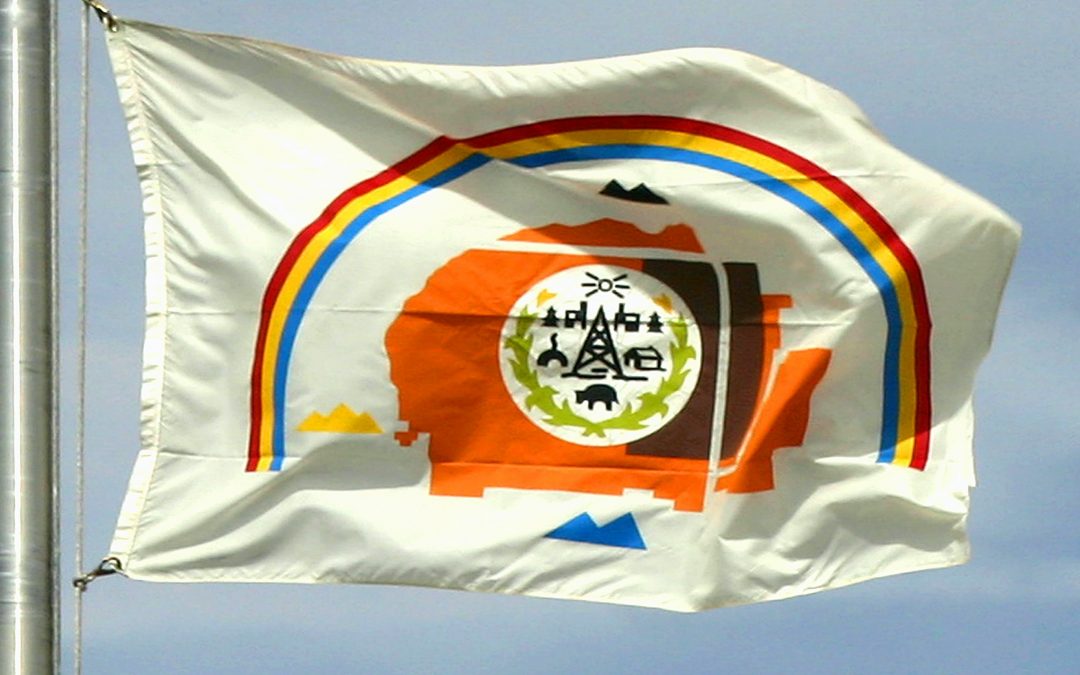 The Diné are resilient people and know how to adapt to hardship. Before Euro-American contact, the Diné wore deerskin clothing. As Spanish, Mexican, and American settlers came to Navajo land and introduced new materials, Diné art and culture evolved.

In 1863 the Diné were removed from their homelands and forced to march to a US government–sanctioned reservation in eastern New Mexico. They were imprisoned at Fort Sumner (also referred to as Bosque Redondo or Hwéeldi by the Diné) until 1868. As a result of this traumatic event, Diné women’s fashion drastically changed.

Before the internment, Diné women wore woven dresses called biil (pronounced beel) in Diné bizaad (Navajo language). They wove biil from sheep wool, which the Spanish introduced in the seventeenth century, when they settled in the Southwest region of the United States. At the Bosque Redondo prison camp, Diné people did not have access to their beloved sheep flocks and wool because the US Army officials managing Bosque Redondo were attempting to assimilate the Diné to white Western lifestyles.

During the internment, Diné people’s clothing became tattered and old. To remedy this, Diné women were given the hand-me-downs of US military wives. These outfits consisted of high-necked, long-sleeved velvet blouses paired with long, gathered, tiered skirts, often in a contrasting calico print or solid colors. Diné girls and women were also taught how to sew this style of clothing by the army wives.

After the Diné leaders signed the Treaty of Bosque Redondo in 1868 and were allowed to return to their homelands, Diné women used the American women’s outfits as sewing patterns, reproducing the silhouettes. White-owned trading posts came to the Navajo reservation at this time and sold goods including the fabrics for this style of clothing, like calico, velvet, and satin. With all these factors in play, Diné women embraced this new style of fashion and made it their own. 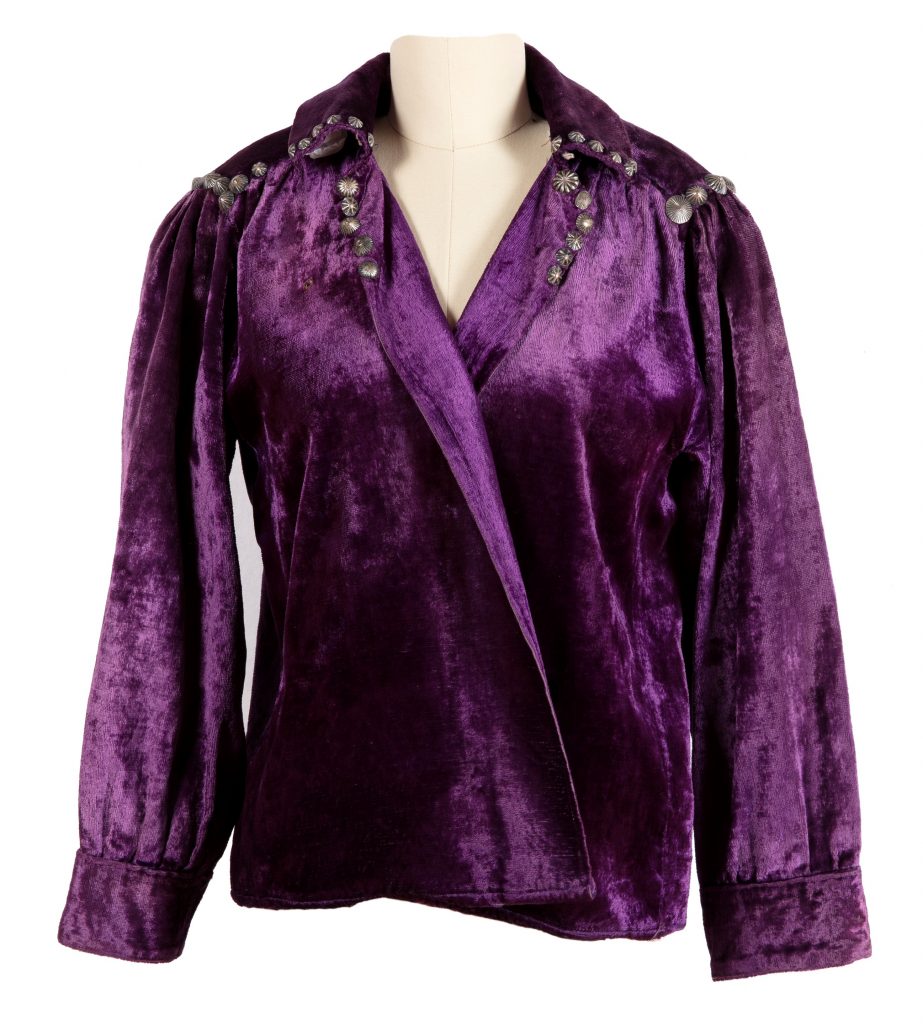 IAF.M632 is a velvet Diné woman’s blouse and one of the pieces from my online exhibition, A Story of Evolution: The Impact of the Sewing Machine on Native American Fashion. This piece was created by an unidentified artist before 1965 and seems to have been made with a sewing machine due to its symmetrical and small stitches.

The collar, lapels, and yoke of this blouse are adorned with different stamped silver buttons. Diné mastered the art of silversmithing in the post–Bosque Redondo era. Historians believe that the first Diné silversmith was Astidi Sani (Old Smith), who learned from a Mexican silversmith in the mid-nineteenth century. Earlier Diné metalsmiths made utilitarian items rather than jewelry or fashion pieces. At Bosque Redondo, the Diné continued to hone their metalsmithing skills with US Army–issued materials like copper and brass. After they returned home, the art of silversmithing took off. The practice was encouraged by Bureau of Indian Affairs agents, who provided silversmithing tools and encouraged sharing of techniques between Diné communities. The integration of silver adornment on velvet blouses is now a hallmark of Diné fashion. Today, amá sánís (grandmothers) and awéés (babies) alike wear high-necked, long-sleeved velvet blouses with silver studs for ceremonies, celebrations, and daily life. 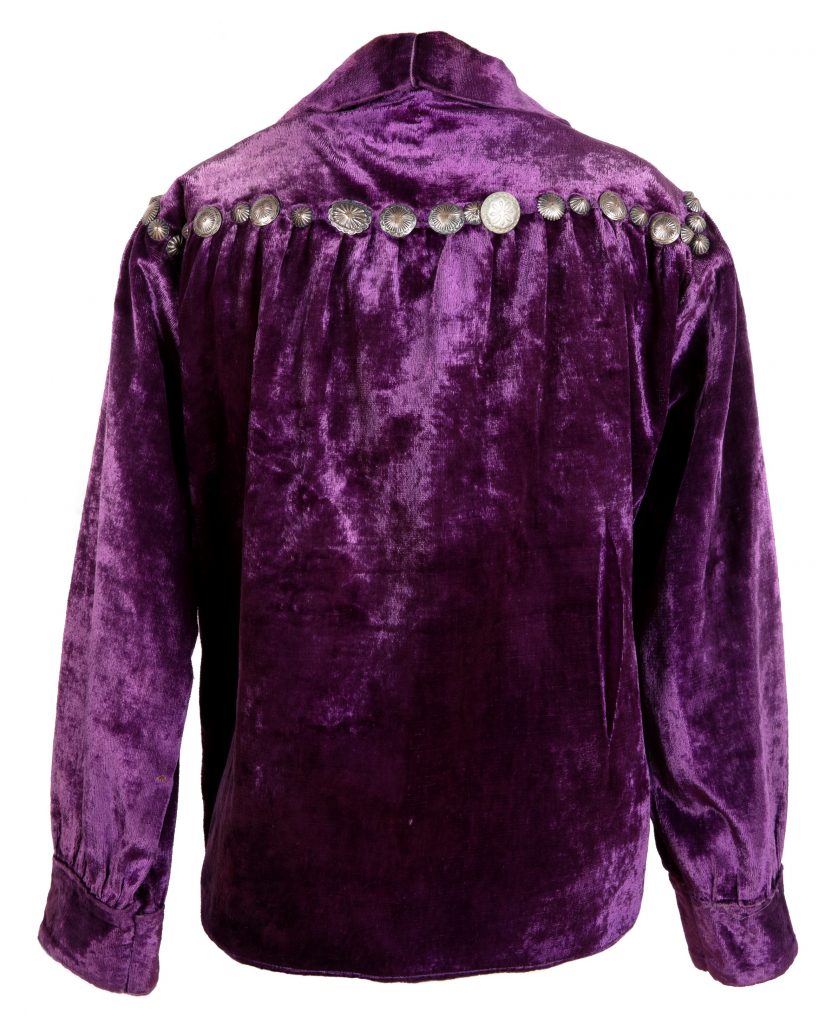 IAF.M632 is thus not only an aesthetically beautiful garment, but also a beautiful representation of Diné history and adaptation.

Register for our upcoming field trip:

Tewa Pathways from Tsankawi to Pojoaque 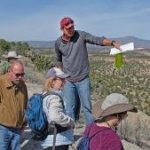 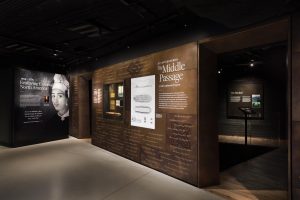