‘Who Were You When You Stepped to This Pot?’1:

A Lesson in Community Curation from Grounded in Clay

Consider when and where you’ve seen Pueblo pottery in a museum. How was it displayed? Who wrote the label? What did it tell you about the Pueblo people who made, held, or cherished the pot? About lineage, loss, love?

Chances are it didn’t tell you much. Throughout the history of museum institutions, Pueblo pottery has been exhibited and interpreted from an academic “expert’s” lens, based in Western archaeological, anthropological, or art historical thought. Frequently removed from the communities who created them, Pueblo pots have been seen as ethnographic remnants of past cultures, or anomalies of fine art – little more.

But beginning July 31, 2022, change is coming. Grounded in Clay: The Spirit of Pueblo Pottery will be opening on the unceded Tewa Indian lands at the Museum of Indian Arts and Culture before traveling nationally to New York, Houston and St. Louis. This exhibition is a community-curated project that prioritizes Pueblo perspectives and voices. Organized by the School for Advanced Research (SAR) and the Vilcek Foundation, this exhibit features over 100 historic and contemporary works of clay, as seen through the eyes of 60 individual tribal members, known collectively as the Pueblo Pottery Collective. They are the curators of the show: each person selected a piece of pottery from the SAR or Vilcek collections, spent time with the piece either virtually or in-person, and wrote about the pot from their own experiences. What emerges is an intimate conversation between people and pottery, taking place in real time.

Grounded in Clay, as described by SAR President Michael F. Brown, “enables the public to experience pottery through the eyes of Native peoples.” This project goal is tightly tied to SAR’s mission and vision as an institution: it brings life to history, explores the present, and broadens perspectives in pursuit of a more informed and equitable society. As SAR celebrates the 100th anniversary of the Indian Arts Research Center (IARC) pottery collection this year, the Grounded in Clay exhibition calls attention to the continued importance of pottery in Indian Country – and the people keeping the traditions alive.

Curators of the exhibition selected pots ranging from pre-contact through present-day; from their own tribal communities and from others; in the shapes of jars, bowls, figures, plates, cups, canteens, and vases; with artists known and unknown. The result? “A much more complex and rich mixture than we’d imagined,” said IARC Director Elysia Poon.

Take, for example, the dough bowl made by Monica Silva (Kewa/Santo Domingo Pueblo), ca. 1920-1940. It was curated by Monica Silva Lovato (San Felipe), a traditional potter and silversmith. Lovato had spent two years doodling a design from a dream she’d had, not knowing what it was for or when she might use it. Understanding that the design was a precious gift, she spent over two years working with the design until she created a bowl that demanded its use.

Later, on a collections visit to select her Guided in Clay vessel, Lovato found herself at SAR. She was looking at printed images of pots from Vilcek’s collection when she saw her own design staring up at her. “That one, that’s my design!” she’d said, flipping the picture over for more information. Hand-written on the back was the annotation, “attributed to Monica Silva.” Monica Silva was Lovato’s great-grandmother. Of this unbelievable turn of events, Lovato says: “That was the moment my dream made sense to me.” 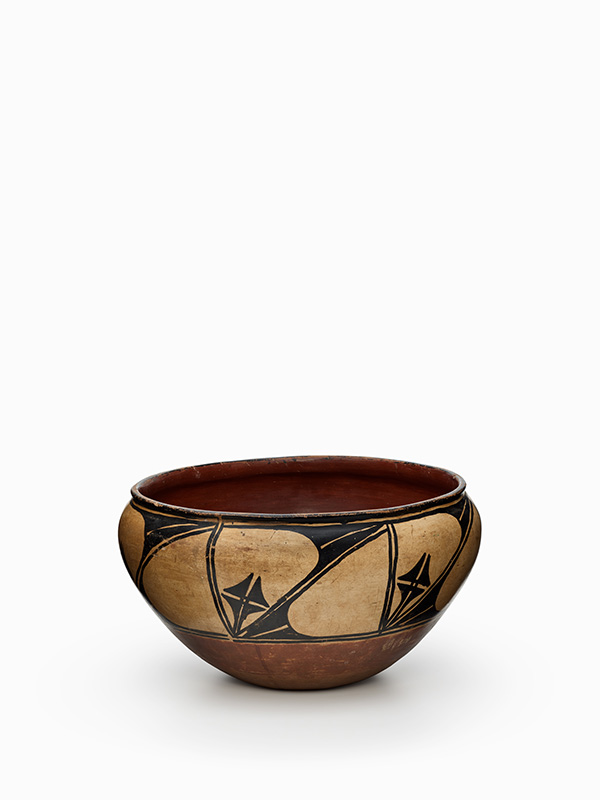 Or consider the pair of storage jars with lids by Martina Vigil and Florentino Montoya (San Ildefonso), ca. 1905. These pots were curated by Nora Naranjo Morse (Kha P’o Tewa/Santa Clara), a self-described artist, homemaker, builder, mother, satya (grandmother), student, elder, and clay worker. Morse, a mother of fraternal twins, finds herself drawn to objects created in pairs. She’s fascinated by pieces that look similar, but upon closer inspection are different. 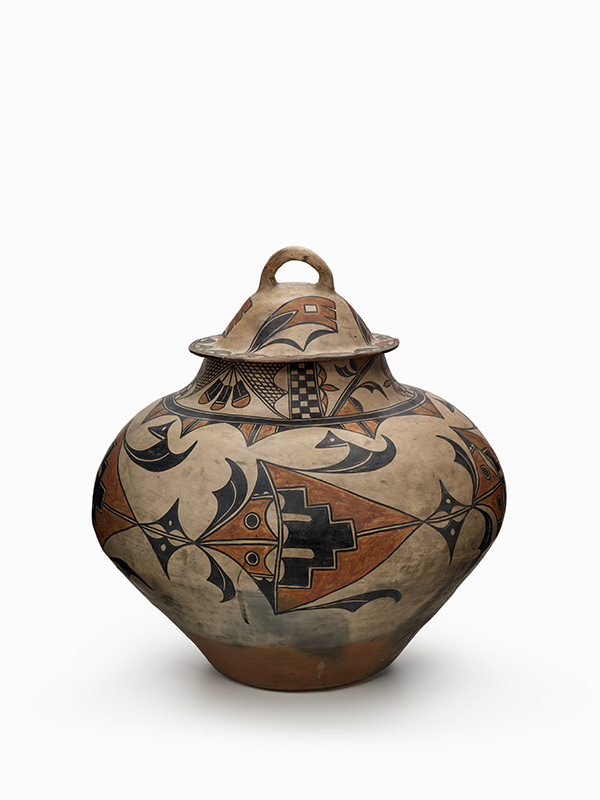 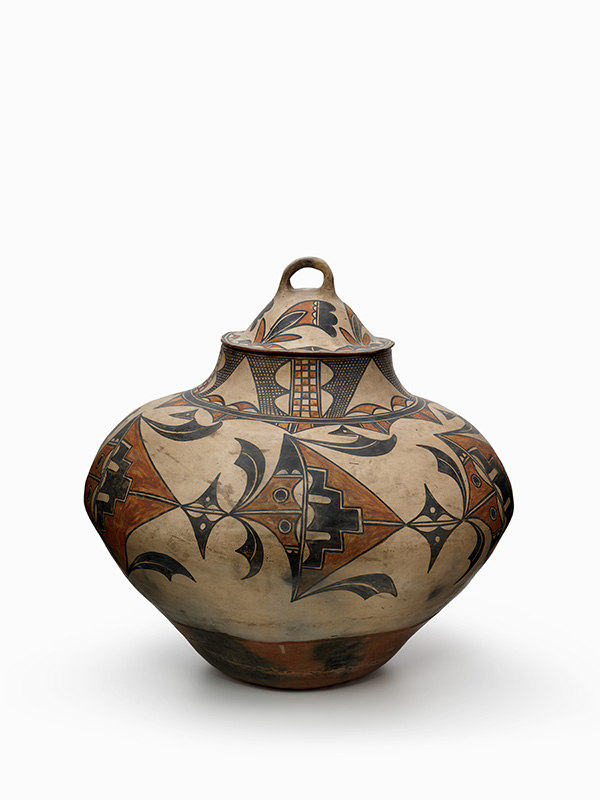 “When I first saw Martina Vigil and Florentino Montoya[‘s] clay vessels,” Morse shares, “I thought of my children, Eliza and Zak.” Even though the jars might look alike at first glance, Morse knows better. She spent time with each vessel, noticing differences in size, curvature, even handle form. “Whatever the setting, the creative exchange between Martina and Florentino resulted in vessels that are visually powerful because of each other,” Morse explains. “And yet, they are different” – much like her own twins.

Stories like these glitter throughout the exhibition. They blend personal life with community meaning, grounding viewers in an undeniable sense of people, place, and pride. At its core, this is the goal of Grounded in Clay: The Spirit of Pueblo Pottery – to challenge the concept that Pueblo pottery is relegated to the past, by amplifying the voices of Native people who sustain and create these stories. Inside this exhibition and beyond its walls, the spirit of Pueblo pottery lives on.

1 Tara Gatewood (Shirr-whip Tui/Isleta, Diné), “From Me to You,” in Grounded in Clay exhibition.

Grounded in Clay is a collaborative exhibit curated by the Pueblo Pottery Collective and organized by the School for Advanced Research and New York’s Vilcek Foundation. The Museum of Indian Arts and Culture is the inaugural host-site for the exhibit. The School for Advanced Research, a 501(c)(3) not-for-profit educational institution, was established in 1907 to advance innovative social science and Native American art. Its 15-acre residential campus sits on ancestral lands of the Tewa people in O’gah’poh geh Owingeh or Santa Fe, New Mexico.