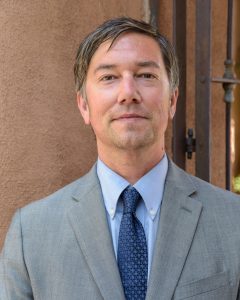 My book manuscript The Great Land employs historical documents, written accounts, and artwork by Alaska’s indigenous people to construct a cultural history around how the state of Alaska gained form from the legacy of Native enslavement and extractive economies.  Underscoring the historical tension between sovereignty and citizenship the book traces how Native belonging to the nation grew from a long history of forced labor in natural resource businesses that emerged with the Russian presence there before the territory’s purchase by the United States. Since the eighteenth century, the removal of raw materials bound distinct Native communities in the southwestern region to a governance founded upon their coercion. Their continued participation in the natural resource industry influenced the ways the United States shaped the region as a political and economic entity called Alaska. This book recognizes that large-scale slavery in southern Alaska in the eighteenth century changed over time for Natives into a variegated citizenship that by the mid-twentieth century spread across the entire territory under United States governance. The slaves of the harvests transformed into citizens of the U.S. engaged in similar work. 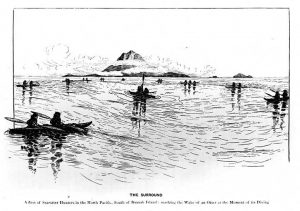 The name “Alaska” derives from the Unangax̂ word Aláxsxax in Umnak, or Aláxsxaq in the Unalaska dialect, that has been translated into English as “The Great Land.”* The word Alaska is an anglicized transformation of the sound of the original word, but the term the Great Land is the literal and at times improperly translated meaning of Aláxsxax, or Aláxsxaq, which is “the object toward which the action of the sea is directed,” meaning the large peninsula of the territory islanders saw to the north east. Russian American Company managers learned the term as they subjugated indigenous populations whom they’d label “Aleut,” within gendered coercive labor regimes for over a century of intense occupation in the southern part of a region they proclaimed as Russian America. This initial colonial period in the eighteenth century bound indigenous people to the mass confiscation of raw materials, a process that has endured and expanded for close to three hundred years. The United States chose the word Alaska, disregarding the names Sitka or Kodiak, which were the former locations of two Russian American Company headquarters. During the transformation from slavery to citizenship, the extractive industry has wrought such environmental disasters as the extinction of animals beginning in the eighteenth century to the Exxon Valdez oil spill in 1989. Using the title The Great Land for the book describes the region by drawing upon the original substance of the Native word to identify a cultural meaning that is beyond the historical confines of the national presence, and manifests a cultural and political geography that flourished before the arrival of Russian interests. 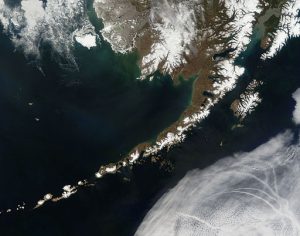 Focusing on Alaska Natives as central to the economic and political advancement of the state, The Great Land traces the Russian and US histories of Alaska through Native experience of compelled belonging. The Great Land stands as the historical Native culture that is a component of the new political entity, the state of Alaska. The state of Alaska, however, is not the entirety of Alaska Native culture, yet the state finds origins in the economies Natives toiled within. The book The Great Land contends that there existed other forms of politics and culture that predate the United States and acknowledges that these ways of being continued to propagate amid the advancement of the region into the State of Alaska. This book, however, proposes that the idea of the Great Land stands as the ongoing presence of Alaska Native culture inclusive of a history predating the coming of Russia or the United States and that these colonial histories contribute to Great Land culture. In this manner the Great Land as a culture serves as a palimpsest of indigenous sovereignties upon which United States nationality has effectively been overwritten. 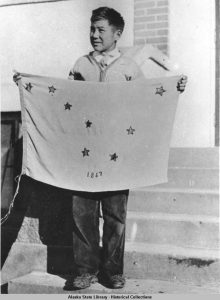 For example, throughout the present-day State of Alaska, streets and institutions bear either the name or likeness of my fellow Alutiiq Jon “Benny” Benson, more so perhaps than any other person from the region’s modern political history. For instance, I went to a secondary school that is now named after him. Unlike historical indigenous figures in the contiguous United States, however, Benson’s fame derives not from his armed resistance to an expanding nation, nor from his involvement as a signatory of treaties. Rather, at the age of thirteen, John “Benny” Benson, an orphan, designed the Alaska flag, a symbol of a meeting point between indigenous people and the United States through the ongoing enterprise of resource extraction. The Western constellation of the Big Dipper, representing a giant shovel, symbolized the continued extractive economy that justified national ownership. The flag, however, also illustrated the indigenous constellation of the Great Bear, a symbol of Native culture. The image on the flag speaks of a double meaning. Through the flag, the orphaned young man served as a metonym for a territory the nation adopted as its own.

As the first Kodiak Alutiiq to possess a tenure track academic job in the contiguous part of the nation, I have been honored to be one of the keynote speakers at the Alaska Native Studies Conference. For years hundreds have attended to converse about the histories, cultures, and politics of the state’s indigenous people. The trials of citizenship and the assertion of sovereignty have endured as those down here in the lower-48 have only recently been concerned that they might lose their arctic region due to climate change. Perhaps Iñupiaq writer Fred Bigjim would have an ironic observation about that? I can think of a few possible responses.