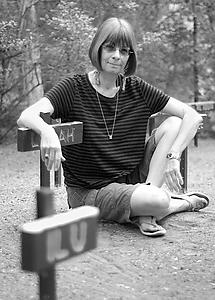 Dean has been elected as a fellow of the American Anthropological Association and of the American Association for the Advancement of Science. She served as an appointed member of the National Advisory Committee of the Decade of Behavior from 1999–2004 and as an invited member of the United States National Committee for the International Union of Anthropological and Ethnological Sciences (USNC/IUAES) from 2000–2002. In Africa, she has been an appointed member of the International Advisory Board of the Institute for Palaeoenvironment, Human Evolution, and Cultural Anthropology, Mekelle University, Ethiopia (2004). European appointments have included membership on the Iceman Board of Directors, Bozen/Bolzano, Italy (2004–2009), and on the Scientific Advisory Council, EURAC Institute for Mummies and the Iceman, Bozen/Bolzano, Italy (2007–2009). In 2003, she received the Austrian Cross of Honor for Science and Art, 1st class.

Dean’s publications focus primarily on the evolution of the brain and cognition, and have appeared in both the scholarly and popular literature. She has been featured in various television and radio programs that have discussed various aspects of her research. Her books include Braindance Revised and Expanded (2004), Finding Our Tongues: Mothers, Infants & the Origins of Language (2009), and The Fossil Chronicles: How Two Controversial Discoveries Changed Our View of Human Evolution (2011), which resulted from her SAR residency. She has enjoyed a long-time collaboration with colleagues at Mallinckrodt Institute of Radiology at Washington University School of Medicine in St. Louis. Most recently, the team has described the virtual endocast of “Hobbit” (Homo floresiensis) and conducted related research on humans with various pathologies such as microcephaly. She described the cerebral cortex of Albert Einstein in an article that was selected as one of the top hundred science stories of 2009 by Discover Magazine—a complete list of publications may be found on her Curriculum Vitae. Current writing projects focus on the endocast of an australopithecine infant, the evolution of the neurological substrates of conscience, Charles Darwin’s views about human evolution, and the evolution of happiness. She recently published a new book about Asperger syndrome, which was co-authored with her granddaughter, Geeks, Genes, and the Evolution of Asperger Syndrome (2018).

DEAN FALK IN THE NEWS 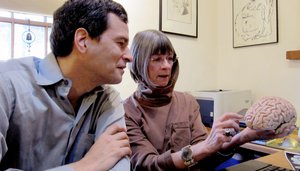 SAR congratulates Dr. Dean Falk. She has been selected as one of this year’s Distinguished Research Professors at Florida State University (FSU). The award recognizes and rewards the outstanding career achievements in research and creative activity of FSU faculty. The formal awards ceremony will be held on April 25, 2014, in Tallahassee, FL.

Dean Falk is an evolutionary anthropologist who splits her time between Santa Fe, NM, where she is a senior scholar at SAR, and Tallahassee, FL, where she is the Hale G. Smith Professor of Anthropology at FSU. Her work focuses on the evolution of the human brain (paleoneurology) and the associated emergence of language, music, art, and science. Falk has published numerous scientific and popular books and articles, and has lectured extensively about evolution to both academic and public audiences. 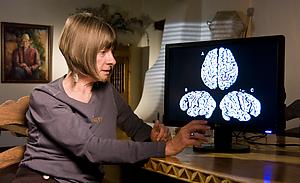 Dean Falk being interviewed on the SAR Campus by the BBC/Canada Discovery Channel show “Daily Planet.”

Finding Our Tongues: Mothers, Infants, and the Origins of Language (Basic Books 2009), is the new book by bio-anthropologist and SAR Resident Scholar, Dr. Dean Falk. On April 9th Dean was interviewed by Diego Mulligan, host of “The Journey Home” (KSFR-FM 101.11, Santa Fe Public Radio). April 23rd she was the guest of the Dallas NPR radio show “Think” on KERA-FM. The show was one-hour live with listener call-ins. This was a fundraising week for the Dallas station and anyone contributing $125 received a complimentary copy of Dean’s book. May 18th Dean will be the featured guest on Wisconsin Public Radio’s “Conversations with Joy Cardin.” This is also a one-hour live show with listener call-ins.

Dean was a featured speaker at Stony Brook, State University of New York, April 21st, 2009. Her presentation, “Whence Homo floresiensis? Clues from the brain”, was part of the Seventh Human Evolution Workshop sponsored by Dr. Richard Leakey and the Turkana Basin Institute.

NOVA’s Aliens From Earth was rebroadcast Tuesday, April 28, at 8PM on KNME, Albuquerque’s PBS station. Dean talked about her work on comparisons of the brains of a Hobbit to the brains of a modern human, Homo erectus, and other members of the great-ape line.

A forthcoming paper, in the publication Frontiers in Evolutionary Neuroscience by Dr. Falk, on Albert Einstein’s brain is garnering attention. Dean compared photos of Einstein’s brain to dozens of photos and measurements of cadaver brains. Her study concluded that the genius possessed a unique brain structure that may help explain his talent as a “synthetic thinker.” Dean was interviewed at SAR on Tuesday, April 28th for the BBC/Canada Discovery Channel show “Daily Planet.”