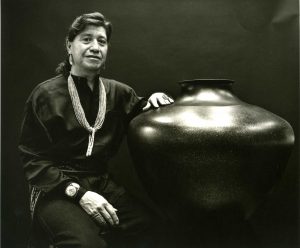 Lonnie Vigil of New Mexico’s Nambe Pueblo, the first recipient of the Ron and Susan Dubin Native American Artist Fellowship, is a micaceous potter. This style of pottery is distinguished by the sparkling mica flecks in the clay and by its traditional use for cooking and storage. Often overlooked by collectors in the past, micaceous pottery is enjoying a new wave of interest and appreciation.

Vigil had no conscious desire to become an artist when he was growing up at Nambe Pueblo. Instead, after earning a degree in business administration from Eastern New Mexico University, he pursued a career as a financial and business consultant in New Mexico and subsequently in Washington, D.C.

By the early 1980s, Vigil was becoming aware that his work and life in Washington “gave me nothing to feed my soul.” A performance at the Kennedy Center called “Night of the First Americans” inspired Vigil to return to Nambe, where he began working with clay. “I prayed for direction from the Clay Mother, and slowly the information began to come,” he says. “I also asked for the help of my great-grandmother and my great-aunts, who were all potters. And I still ask their guidance today.”

Vigil, whose pots have won the top awards at several Santa Fe Indian Markets, sees himself as “a guardian of the clay” and says, “I feel responsible for making sure that the Clay Mother stays alive in my village.” Upon receiving the fellowship, Vigil said, “I am honored to be the first Dubin Fellow at such a fine institution as the School for Advanced Research. The Fellowship is an affirmation of the work I am doing.”