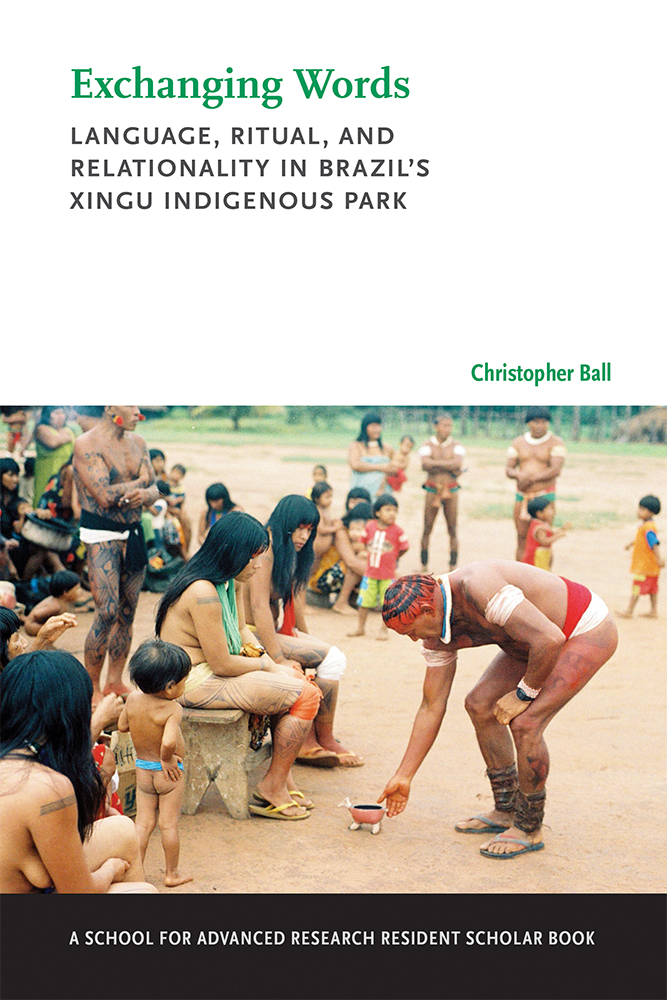 Like human groups everywhere, Wauja people construct their identity in relation to others. This book tells the story of the Wauja group from the Xingu Indigenous Park in central Brazil and its relation to powerful new interlocutors. Tracing Wauja interactions with others, Ball depicts expanding scales of social action from the village to the wider field of the park and finally abroad. Throughout, the author analyzes language use in ritual settings to show how Wauja people construct relationships with powerful spirit-monsters, ancestors, and ethnic trading partners. Ball’s use of ritual as an analytic category helps show how Wauja interactions with spirits and Indian neighbors, for example, are connected to interactions with the Brazilian government, international NGOs, and museums in projects of development. Showing ritual as a contributing factor to relationships of development and the politics of indigeneity, Exchanging Words asks how discourse, ritual, and exchange come together to mediate social relations close to home and on a global scale.

“In this elegantly written and theoretically sophisticated ethnographic monograph, Christopher Ball demonstrates the centrality of discourse and linguistic interaction to systems of exchange and ritual among the Wauja people of Brazil’s Xingu Indigenous Park. Each chapter presents a deeply contextualized and well-argued analysis of wonderfully rich data, illuminating how discourse and language practice operate as forms of ritual exchange that mediate relationships between Wauja and powerful others at various interconnected levels of scale. Ball effectively draws out the broader theoretical implications of the Wauja case, showing how self-identification and alterity are mediated and managed through discursive and ritual interactions. Exchanging Words: Language, Ritual, and Relationality in Brazil’s Xingu Indigenous Park makes major ethnographic and theoretical contributions the ethnography of Lowland South America, Linguistic and Social Anthropology, and discussions of indigeneity. The ethnography is splendid; analysis in each chapter—and the analysis taken as a whole—is sophisticated and insightful. This brilliant book is certain to have tremendous impact.”
—Laura Graham, professor, Department of Anthropology, University of Iowa, author of the award-winning Performing Dreams: Discourses of Immortality among the Xavante Indians of Central Brazil

“Exchanging Words is a strong work of ethnography that offers an innovative look at the intersections of language, religion, and economy and their implications for the politics of indigeneity in Latin America and beyond. The later chapters are especially good at highlighting imbalances of power that can make intercultural exchanges particularly fraught for indigenous people. As Ball notes, taking to heart Wauja insights into the variegated ways communication, exchange, and ritual are mutually implicated in both local and transnational encounters invites us to be ever mindful of the ethical entanglements our research implies.”
—Eric Hoenes del Pinal, University of North Carolina at Charlotte, The Latin Americanist, June 2019

“Exchanging Words is a theoretically interesting book that deals with some of the key issues in indigenous Brazil in a thoughtful and insightful manner. . . . Ball’s analyses and discussions are sensitive to the complex context in which he writes. With this book, Ball seeks to “honor Wauja interests and voices” (p. 16), and to replace “preconceived ideas about indigenous categories and relations” with “approaches based in ethnographic study” (p. 235) as part of an ongoing debt that is integral to his relationship with the Wauja and that he passes on to us, his audience. This book contributes in important ways toward these aims, for example by taking up difficult questions related to continuity and change, indigeneity as an identity category, and perceptions of indigenous authenticity. I would recommend this book to anyone working on indigeneity, especially in Latin America. Scholars of race, racism, and decolonization will also find useful ideas here. Graduate students and others preparing to go to ‘the field’ would benefit from Ball’s discussions of varying perspectives on exchange practices. It would also be of interest to those working on topics such as indigenous mobilization, invisibility, and urban indigeneity, as well as to those interested in spatiotemporal analyses.”
—Jessica Fae Nelson, University of Wyoming, Journal of Linguistic Anthropology, August 2020

“Ball’s ethnolinguistic analyses and terminology may be intense for non-linguists, and readers expecting a treatise on religion might not get what they came for, but as a study of language, ritual, and relation-building, the book delivers what it promises. Ball has done a fine job of creating a thread of connection through very disparate subjects, and his authorial voice is very appealing, particularly on the final page where he invites the reader to commit to better understanding of encounters of otherness (interethnic, to be sure, but also interdisciplinary and even interpersonal). ‘On it depend our commitments to one another and to others in pursuit and production of knowledge and respect’ (235).”
—Jack David Eller, Community College of Denver, Reading Religion, February 2019