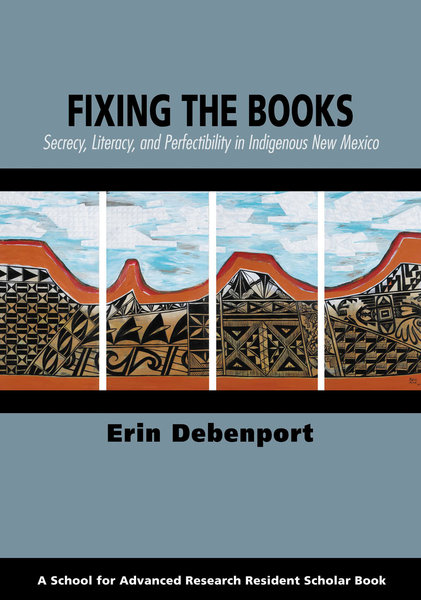 In Fixing the Books, professor Erin Debenport (anthropology, University of New Mexico) presents the research she conducted on an indigenous language literacy effort within a New Mexico Pueblo community, and the potential of that literacy to compromise Pueblo secrecy. She analyzes the decision to produce written materials in a historically oral language and whether that decision is at odds with the linguistically and culturally “conservative” reputation of Southwest tribes, and potentially disrupts the control of both the intra- and intercommunity circulation of cultural knowledge. Debenport concentrates on the role of literacy in the formation of groups and the ways such groups have been connected to political participation, using the case study of San Ramón Pueblo (she uses pseudonyms throughout) as a counterexample to some of the prototypical cases of textual circulation. Looking closely at the texts themselves, she asks how the choices that authors make when crafting indigenous language texts index the larger goals and visions of a community and describes both the formal properties of various types of text, including dictionary example sentences, personal narratives, and pedagogical language dialogues, and the ways these pieces are intertextually linked with other written and oral texts. Debenport concludes that the apparent contradiction surrounding this Pueblo’s literacy effort is actually a reflection of the often unexpected uses of texts that occur in contexts of revitalization and emergent literacy and the multiple language ideologies being indexed and utilized by community members. This ethnographic study of emergent literacy provides a complex picture of secrecy, intellectual property, and the formation of publics through its examination of the relationships between prevailing linguistic ideologies, intertextual connections, and the contexts surrounding the production of indigenous language texts.

“Fixing the Books is replete with tensions and paradoxes that simultaneously illuminate and challenge what we think we know about indigenous literacy, language revitalization, and the formation of publics. Erin Debenport has pulled off an ethnographic tour de force: discovering and reporting on language, cultural knowledge, and text-making in a setting shaped by ideologies and regimes of secrecy and restrictions on the dissemination of information. All aspiring ethnographers, wherever they plan to work, will have much to learn from this fascinating book.”
—Richard Bauman, Indiana University

“Fixing the Books is a deep and thought-provoking study. Not only is it a landmark in Puebloan scholarship, it is one of the most important analyses in our literature of the complex ways that language is embedded in culture, and culture in language.”
—Jane H. Hill, University of Arizona

“Erin Debenport’s fine book … discusses the recent development of literary practices at ‘San Ramon’ pueblo (a pseudonym) since 2003. … This enjoyable book is useful for students of multiple disciplines including linguistic anthropology and American Indian studies, among others.”
—Margaret Field, Journal of Anthropological Research

“Debenport’s analysis of Keiwa literacy and lexicography shows how a written form can be imbued with new cultural meanings and functions rather than taken over wholesale along with its original linguistic ideological framing. At San Ramon Pueblo, the dictionary was not (or not only) an appurtenance of a nationalist language ideology nor a vehicle for teaching language as a lexical and grammatical code. In the eyes of its authors, the Keiwa dictionary should convey a whole way of life.”
—Saul Schwartz and Lise M. Dobrin, Reviews in Anthropology 45, no. 2

“The author’s ethnolinguistic examination of Pueblo secrecy in relationship to a particular community’s indigenous language texts presents new anthropological approaches to both language revitalization and situated literacies. . . . One of the book’s most significant theoretical contributions comes with its attention to processes of textual revision in the strategic circulation of texts, contributing to theory on literacy’s role in the formation of public spheres. San Ramon Pueblo literacy is presented as a counterexample to cases more commonly presented in the social scientific literature which focus on the mass, unmediated circulation of texts among anonymous audiences. By examining proprietary practices in San Ramon Keiwa language writing, Debenport demonstrates literacy’s potential as a tool for regulating and controlling the circulation of community knowledge. . . . Fixing the Books makes significant contributions to Pueblo scholarship as well as to theoretical and methodological discussions in linguistic anthropology and indigenous studies. Debenport’s ethnographic study explores and challenges a number of problematic dichotomies including traditional/modern, literate/oral, public/private that are relevant to the study of indigenous discourse communities. While some may be unsatisfied with the absence of tokens for the indigenous language under study, the author provides sufficient grammatical information about the language and translated examples under study to support her analysis. Debenport’s decision to veil the language is an appropriate and thought-provoking methodological choice for this study. As the author argues, it also further challenges scholars to consider the anthropological tendency to privilege the presentation of ‘hidden truths’ about the communities with whom we work at the expense of other relevant topics and forms of evidence.”
—Christina Leza, Colorado College, Journal of Linguistic Anthropology, August 2017

5. As the Rez Turns: Propriety and Covert Political Action