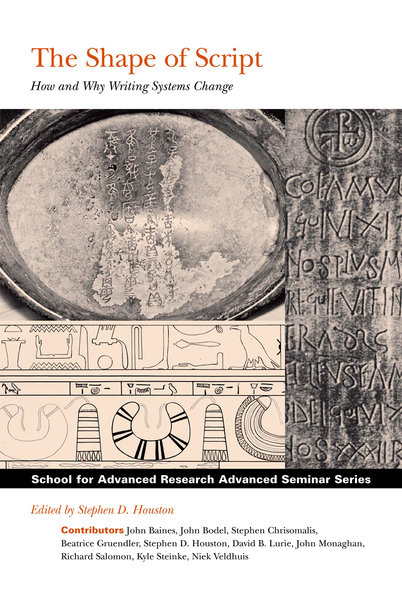 The Shape of Script

How and Why Writing Systems Change

This book builds on earlier projects about the origins and extinctions of script traditions throughout the world in an effort to address the fundamental questions of how and why writing systems change. The contributors—who study ancient scripts from Arabic to Roman, from Bronze Age China to Middle Kingdom Egypt—utilize an approach that views writing less as a technology than as a mode of communication, one that is socially learned and culturally transmitted.

“Having edited two valuable collections on how scripts are born (The First Writing) and how they die (The Disappearance of Writing Systems), Stephen Houston has now assembled a third, equally valuable collection, The Shape of Script. … Until quite recently, it was common for most scholars of writing to assume that writing systems must inevitably evolve towards greater efficiency or a more phonemic representation of the languages they express. This somewhat arid view is no longer tenable…. As Houston rightly argues in his Preface, ‘The study of writing needs to be brought back into the fold of anthropology, not as a marginal or recondite specialty but because it is an indispensable tool by which knowledge is transmitted.’ The wide-ranging contributors to this collection respond to this brief with both erudition and imagination.”
—Andrew Robinson, author of The Story of Writing, Lost Languages, The Man Who Deciphered Linear B, and Cracking the Egyptian Code

“This collection of essays addresses a rarely treated but strategic set of questions. It shows that the study of the evolution of script systems constitutes the best way to understand how aesthetics and script use can shape each other in a cultural tradition, and more generally, how the visual appearance of signs can influence the social use of language. In a very wide range of case studies—from Maya and Mixtec to Latin, Egyptian, Arab, and Chinese—each contributor demonstrates that the ‘shape’ of script has its own levels of analysis from its minute constituents to its broader macro-settings. The Shape of Script is a great attempt to marry an amazing scholarship with an anthropologically-minded perspective on writing, seen as a culturally-shaped mode of communication and as one of the central cultural productions in human history. It certainly is a stunning achievement.”
—Carlo Severi, Ecole des Hautes Etudes en Sciences Sociales, Paris