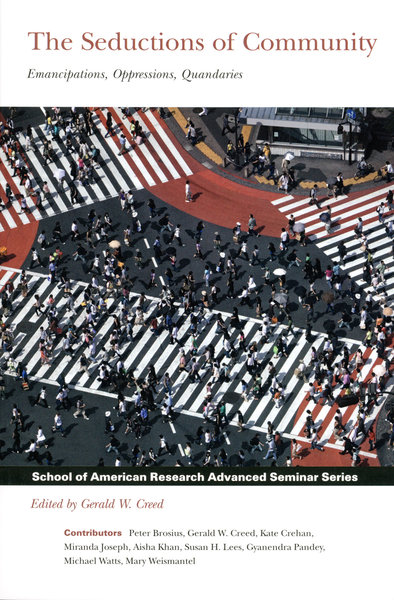 The Seductions of Community

The concept of “community” is ubiquitous in the way we talk and think about life in the twentyfirst century. Political and economic projects from rainforest conservation to urban empowerment zones focus on “the community” as the appropriate vehicle and target of change. Some scholars see a decline of community and predict dire social consequences; others criticize the concept itself for its ideological baggage and lack of clear definition. Moving the debate to a deeper level, the contributors to this volume aspire to understand the various ways “community” is deployed and the work it performs in different contexts. They compare the many cases where scholars and activists use “community” generically with instances in which the notion of community is less pervasive or even non-existent. How does a community facilitate governance or capital accumulation? In what ways does it articulate these two forces in local and translocal contexts? What are the unintended consequences of deploying the concept—and what, too, are the potential consequences of criticizing our fascination with it? The essays demonstrate the critical value of using community as the focus of analysis, rather than simply an empty category of heuristic or descriptive convenience.

“This book is suitable for both upper-level and undergraduate studies. It also reinvigorates our interest in ‘community,’ particularly as it bears on current social theory. The book should appeal to both anthropologists and interdisciplinary scholars who seek nuanced, ethnographic, and transnational approaches to governmentality, postcolonial politics, and cultural practice.”
—Glynis George, American Anthropologist, vol. 110, no. 1, March 2008