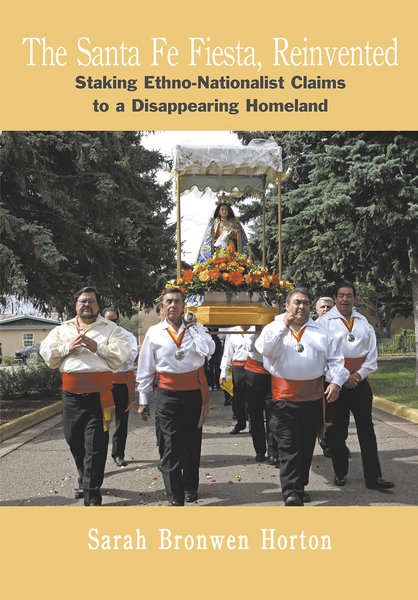 The Santa Fe Fiesta, Reinvented adds a new perspective on the controversial identity formation of New Mexico’s Hispanos. Through close readings of canonical texts by New Mexican historian Fray Angélico Chávez about La Conquistadora, a fifteenth-century Marian icon to whom legend credits Don Diego De Vargas’s “peaceful” resettlement, and through careful attention to the symbolic action of the event, this book explores the tropes of gender, time, genealogy, and sexuality through which this form of cultural nationalism is imagined. Interviews and archival research reveal that even as Hispanos were increasingly minoritized in the former homeland site of Santa Fe, Hispano elites progressively invented and re-created the four cultural organizations that organize the Fiesta to lay claim to this disappearing homeland. Such organizations not only Hispanicized the Fiesta’s content and key roles, usurping the role of De Vargas from Anglos, but sacralized their claims through foregrounding the role of Hispanos’ “sacred mother,” La Conquistadora. With narratives of Fiesta organizers and colorful vignettes of life in contemporary Santa Fe, this book documents Hispanos’ veiled protest of Anglo imperialism and the transformation of this city into what has been called an “Adobe Disneyland.”

“This study offers fresh insight into the icons, roles, performances, and players that make up the Santa Fe Fiesta. Horton shows how this popular festival has become a symbolic assertion of cultural nationalism in response to the social and economic forces that are driving Hispanos from the gentrified core of the city…an important contribution…will interest students, scholars, and residents of the region.”
—Sylvia Rodríguez, University of New Mexico

“An examination of the Santa Fe Fiesta as a symbol of identity for Hispanos in New Mexico’s capital city. This study will take its place beside a growing number of recent offerings that focus on the Hispano experience in New Mexico and the Southwest, an area that was virtually ignored during much of the nineteenth and twentieth centuries.”
—Andrew Leo Lovato, Santa Fe Community College, New Mexico Historical Review, Spring 20aa, vol. 86, no. 2

“…This is a meticulously researched, wonderfully written book that promises to change the way we think about Latino nationalisms.”
—John Nieto-Phillips

“An extraordinary study of Hispanic identity and connection with their homeland, as well as the expression of this cultural celebration, The Santa Fe Fiesta, Revisited is an excellent addition to college library ethnic studies shelves.”
—Library Bookwatch, July 2010

“The Santa Fe Fiesta, Reinvented follows the known script of Hispanic political, demographic, and socioeconomic dispossession, and uses nationalism and internal colonialism to analyze the Fiesta as it evolved into the current celebration of Hispanic identity and cultural revivalism….Horton’s well-written book offers a valuable interdisciplinary addition to our understanding of the process of Hispanic cultural revitalization. It will be of use to those interested in the contributions of culture to the formation of Hispanic/Mexican American/Latino identities.”
—David Rex Galindo, Southern Methodist University, Southwestern Historical Quarterly

“Horton’s study is a throughly researched, wonderfully written account of [the Santa Fe] Fiesta .. Horton’s study goes beyond an analysis of an invented tradition, offering an insightful elaboration of the reasons that this festival has such resonance for local Hispanos .. Horton’s book is an important contribution to studies of New Mexico and community festival, as well as studies of cultural nationalism in general.”
—Laura Hernandez-Ehrisman, St. Edward’s University, Journal of Anthropological Research, vol. 67, 2011