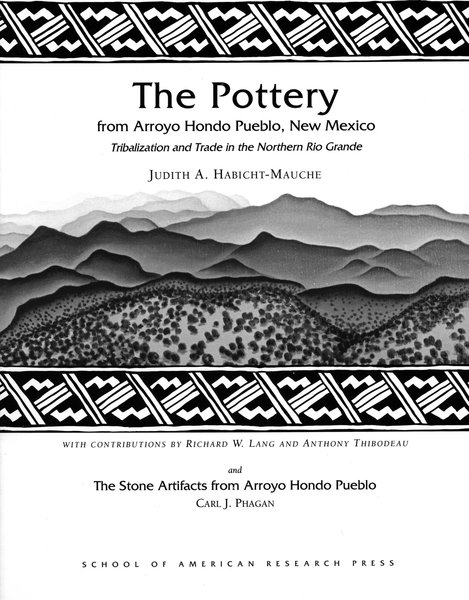 Tribalization and Trade in the Northern Rio Grande

Arroyo Hondo Pueblo, one of the largest fourteenth century sites in the northern Rio Grande region, was excavated by the School of American Research under the leadership of Douglas W. Schwartz between 1970 and 1974. In this eighth volume of the Arroyo Hondo Archaeological Series, Judith A. Habicht-Mauche presents a masterful description and interpretation of the pottery from Arroyo Hondo.

Habicht-Mauche builds on an exhaustive study of the mineralogical and chemical attributes of the ceramic assemblage to produce a penetrating evaluation of the stylistic diversity, origins, and changes through time of the pottery types found at Arroyo Hondo. From this analytic foundation, she draws larger conclusions on the structure of the pueblo’s social and economic alliances and their significance for understanding population expansion, resource competition, regional trade, craft specialization, ethnic diversity, and the rise of tribal networks throughout the northern Rio Grande region.

In additional reports, Richard W. Lang provides an analysis and seriation of stratigraphic ceramic samples from the pueblo, and Anthony Thibodeau describes the miscellaneous ceramic artifacts including pipes, effigies, balls, and beads.

This volume also contains a final report on the stone artifacts from Arroyo Hondo, in which Carl J. Phagan accomplishes a comprehensive reconstruction and interpretation of the lithic data collected at the site in 1971–72 and 1973–74.