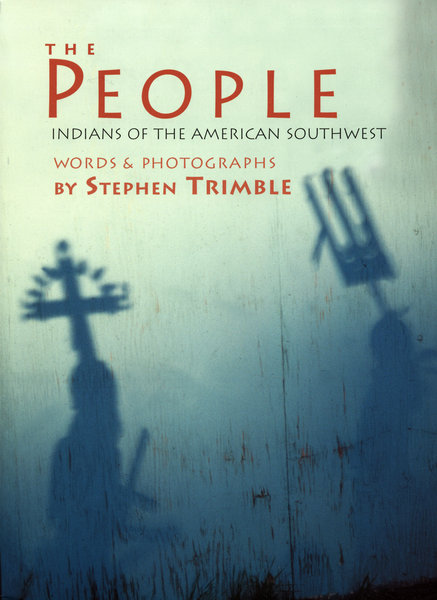 Indians of the American Southwest

Text and photographs by Stephen Trimble

Fifty Indian nations lie within the modern American Southwest, communities sustained through four centuries of European and American contact by their cultural traditions and ties to the land. In The People, Stephen Trimble provides an introduction to these Native peoples that is unrivaled in its scope and readability. Graced with an absorbing, well-researched text, a wealth of maps and historic photographs, and the author’s penetrating contemporary portraits and landscapes, The People is the indispensable reference for anyone interested in the Indians of the Southwest.

“Trimble’s book represents the best general introduction to the native peoples of the Southwest that has ever been published. Nor is it good only by comparison: it is a superb book. It combines the traditional concerns of ethnography, ethnohistory, and prehistory with a newer one of letting native voices speak for themselves. More native voices are represented here than in any other book written for a general audience, and this is as it should be.”
—Dr. Alfonso Ortiz, University of New Mexico

“[O]ne of the most comprehensive and insightful discussions of the modern native peoples of the American Southwest ever written…. [T]here is much here to engage the seasoned scholar of Southwestern history and culture.”
—Judith Habicht-Mauche, Ethnohistory, Vol. 43, no. 4 (Fall 1996)

“There are many reasons to like this book – its highly readable prose style, its fine-art quality photographs, its carefully researched historical agenda, and its personable and perceptive interview quotes…”
—Scott Vickers, The Bloomsbury Review (January-February 1994)

“Many people…consider [this] book to be the best general introduction to the 50 Native Amreican nations dotting the modern American Southwest.”
—New Mexico Magazine January 2006

“Trimble’s introduction to these cultures is exceptional; he redefines American ethnography.”
—Library Journal

“A masterpiece, a warm and brilliant book.”
—Gary Paul Nabhan

“Stephen Trimble’s The People is a valuable addition to the library of anyone interested in the Indian cultures of the Southwest. It may well become one of those classics that stay in print forever.”
—Tony Hillerman

“Each family moving to the Southwest … should be sent a clean copy…. A remarkable accomplishment in a work of detailed non-fiction.”
—Colorado Plateau Advocate