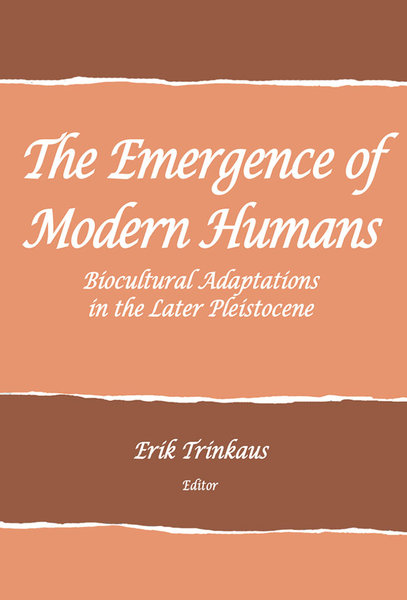 The Emergence of Modern Humans

Biocultural Adaptations in the Later Pleistocene

This volume is a collection of essays identifying the current issues regarding the origins and emergence of a “modern” human biological and behavioral pattern from the earlier patterns inferred for late archaic humans. They identify changing behavioral complexes in human life during the period between 120,000 and 20,000 years ago, and examine paleontological and archaeological approaches to such phenomena. They include studies documenting the origin of and transition to modern humans, both in general terms and in specifically directed accounts, dealing, for example, with the evolutionary place of the Neanderthals, or evidence in southwest Asia. In addition there are chapters analyzing biological aspects of this transition (as seen in facial form) and cultural phenomena relating to the pattern of development (such as the earliest body ornaments). Rather than providing a definitive statement or any single position, the book presents the diversity of current views, suggesting avenues of inquiry and focusing attention on behavioral complexes that were important in the eventual disappearance of late archaic humans (including the Neanderthals) and the global emergence of modern man.

The Emergence of Modern Humans inquiry:

There are no reviews at this time.
List of Contributors
Forward
Preface
There are no working papers for this book at the present time.