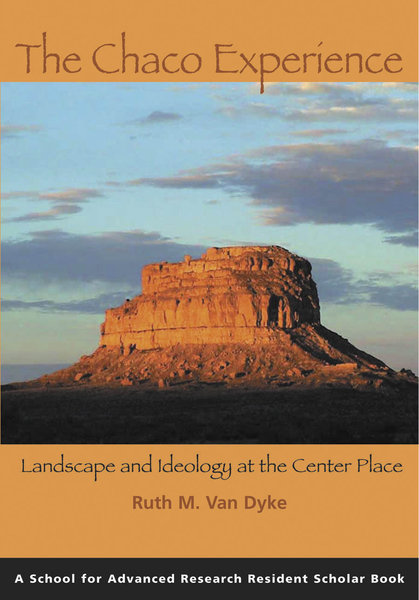 Landscape and Ideology at the Center Place

In a remote canyon in northwest New Mexico, thousand-year-old sandstone walls waver in the sunlight, stretching like ancient vertebrae against a turquoise sky. This storied place—Chaco Canyon—carries multiple layers of meaning for Native Americans and archaeologists, writers and tourists, explorers and artists. Here, isolation, the arid climate, and dry-laid construction have preserved ruins that are monuments to prehistoric creativity and perseverance. Chaco Canyon draws its power not only from the ancient architecture sheltering beneath its walls, but from the ever-changing light and the far-flung vistas of the Colorado Plateau. Light and shadow, stone and sky come together in the canyon. At the heart of this sky-filled landscape lie twelve massive great houses. The Chacoan landscape, with its formally constructed, carefully situated architectural features, is charged with symbolism. In this volume, Ruth Van Dyke analyzes the meanings and experience of moving through this landscape to illuminate Chacoan beliefs and social relationships.

“Van Dyke [relives the Chacoan landscape] by ‘walking where the Chacoans walked, perceiving spaces as closely as possible to the ways in which they perceived them.’

While basically and for the most part rigorously a work of archaeological research and related anthropology, the book adds a considerable dimension to this by being primarily concerned with the site as the ‘center place,’ a key concept and often particular site in any mythology and spirituality sometimes known as the ‘omphalos.’

Van Dyke’s study has amplitude and insight for paying attention to each particular moment and particular construction while appreciating the site as the highest, most complex expression of Chacoan culture….

“The Chaco Experience is an original and provocative study of one of America’s great enigmas.

Van Dyke is an outstanding member of a new generation of Chaco scholars that are employing innovative interpretations based on recent knowledge to help us understand this perplexing phenomena.”
—Mark Michel, American Archaeology, Vol. 12, No. 2, Summer 2008

“Van Dyke selects a phenomenological approach to landscape that directs her to visibility, movement, memory and cosmology. Her field methods included walking miles of ancient Chacoan roads…. Van Dyke’s descriptions of these walks, what she noticed and felt, augmented by her color photographs, are fascinating.

She paints worlds in words and may communicate to readers an appreciation of the complexities and wonders of Chaco Canyon.”
—Linda S. Cordell, Journal of Field Archaeology, Vol. 34, 2009

“Before finishing the first page I was hooked on her [Van Dyke’s] lyric description of not only Chaco Canyon but the surrounding horizon’s pull. She sees Chacoan roots in Basketmaker and Pueblo I settlements growth to agricultural villages. She envisions five major Ancestral Puebloan thems manifesting at Chaco: 1. sacred geography, 2. visibility, 3. movement, 4. memory, 5. cosmography. This is a book that I unequivocally recommend, certainly worth far more than the [price].”
—Charles Swenson, DirtBrothers.org

“Ruth Van Dyke is an outstanding Chaco scholar, and The Chaco Experience is her intriguing take on this key Southwestern site. Van Dyke views Chaco from a phenomenological perspective, by which she means understandings and descriptions of the world as experienced by cognizant subjects, p. 39. The Chaco Experience is refreshingly forward looking in tone and texture. In 250 pages, Van Dyke covers a lot of ground.”
—Stephen H. Lekson, Current Anthropology, August 2009

“It has been difficult to suggest a good first book for those interested in diving into Chaco Canyon the place, the ancient phenomenon, and the object of archaeological scrutiny. Much of the literature on Chaco assumes substantial background knowledge, and many works are clearly written for those already initiated into Chaco-arcana. In this context, Ruth Van Dyke’s concise, non-technical, and well-written book stands out as an exception. Van Dyke’s book is neither an introductory text nor a survey of the literature. The author has a definite perspective on Chaco and seeks to expand the range of evidence used to interpret the place. At the same time, the author presents a good summary of the Chacoan archaeological record, takes few shortcuts in introducing the range of perspectives on the Chaco phenomenon, and cites most of the relevant literature. The result is a book that works just as well as a first book on Chaco as it does as a book with specific points to make about Chaco and about archaeological practive in general.”
—Scott Ortman, Crow Canyon Archaeological Center, H-Net Reviews