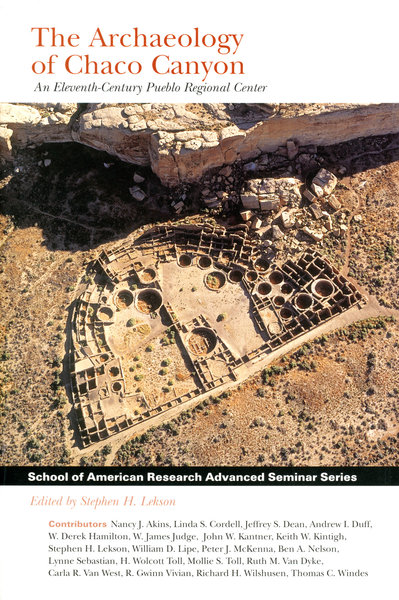 The Archaeology of Chaco Canyon

The site of a great Ancestral Pueblo center in the 11th and 12th centuries AD, the ruins in Chaco Canyon look like a city to some archaeologists, a ceremonial center to others. Chaco and the people who created its monumental great houses, extensive roads, and network of outlying settlements remain an enigma in American archaeology. Two decades after the latest and largest program of field research at Chaco (the National Park Service’s Chaco Project from 1971 to 1982) the original researchers and other leading Chaco scholars convened to evaluate what they now know about Chaco in light of new theories and new data. Those meetings culminated in an advanced seminar at the School of American Research, where the Chaco Project itself was born in 1968. In this capstone volume, the contributors address central archaeological themes, including environment, organization of production, architecture, regional issues, and society and polity. They place Chaco in its time and in its region, considering what came before and after its heyday and its neighbors to the north and south, including Mesoamerica.

“This is a landmark book. It synthesizes the results of the last great archaeological project that may ever be conducted in Chaco Canyon.

The Archaeology of Chaco Canyon includes chapters by most of the organizers of each of the thematic conferences, supplemented by additional chapters to provide better regional, macroregional, and historical context…. It is a grand pyramid scheme, but in this case, it benefits everyone involved.”
—Barbara J. Mills, American Anthropologist Vol. 110, No. 1, March 2008

“In 12 chapters, 20 authors treat major themes to explain the extraordinary Chaco phenomenon. It is an impressive accomplishment, clearly written and carefully edited, with good maps and illustrations. Highly recommended for general archaeology collections.”
—K. A. Dixon, Choice, Vol. 44, no. 9 (May 2007)

“The Archaeology of Chaco Canyon is one of two synthesis volumes resulting from the National Park Service Chaco Project (1971-1982). As the capstone to that project, this volume has much to offer the student of Chaco and those interested in the intellectual history and trajectories of archaeological theory….The wealth of information addressed and interpreted in the text is truly a valuable contribution to the discipline.”
—Carrie C. Heitman, Kiva: The Journal of Southwestern Anthropology and History Vol. 72, no. 4 (Summer 2007)

“This edited book captures the excitement and promise of the Chacoan synthetic conferences of the last several years….The volume contains chapters addressing architecture, environment, paleoenvironment, and a synthesis of the synthetic work….[It] is…an essential contribution. I recommend it for all students at every level of Puebloan and Chacoan studies.”
—Paul F. Reed, New Mexico Historical Review Vol. 82, no. 4 (Fall 2007)