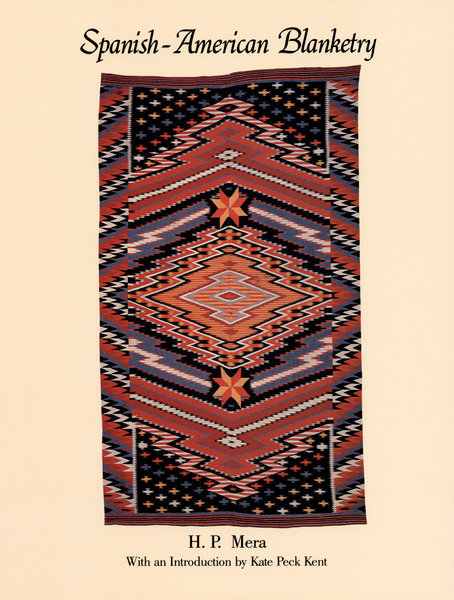 Its Relationship to Aboriginal Weaving in the Southwest

H.P. Mera; with an introduction by Kate Peck Kent

In 1984, while studying textiles in the collections of the School of American Research, Kate Peck Kent discovered a manuscript on Spanish-American weaving by the late H.P. Mera, curator of archaeology at Santa Fe’s Lab of Anthropology. This forgotten manuscript describes the origin and history of the distinctive textiles woven by Spanish-Americans in New Mexico.

Kate Peck Kent was professor emerita of anthropology at the University of Denver, a research associate at the Museum of International Folk Art in Santa Fe, New Mexico, and a resident scholar at the School of American Research. Dr. Kent has also written Pueblo Indian Textiles and Navajo Weaving: Three Centuries of Change which describes and interprets the textile collections at the School of American Research’s Indian Arts Research Center.

“The style is beautifully illustrated in color photographs….The book should be useful to the general public and scholars.”
—Choice

“With an enlightening text and twenty-four color plates of superbly crafted blanketry, [H. P.] Mera relates the historic importance of a weaving style that is wholly Spanish, while clarifying the relationship between Pueblo, Navajo, and Hispanic weaving.”
—American West June 1988

“Spanish-American Blanketry is a welcome addition to the growing body of scholarship on weaving of the Southwest of the United States.”
—Margot Blum Schevill, Museum Anthropology Vol. 12, no. 1 (February 1988)

“In eighty informative pages, [H. P.] Mera has captured the ancient art of Hispanic Weaving, for both the inquisitive amateur and the scholar who wishes to explore unknown territory. It is an important book, one that belongs in any serious Southwest collection.”
—Michael Miller, New Mexico Historical Review (January 1989)

“Spanish-American Blanketry is a unique book whose historical information is important to many handweavers and whose blankets are inspiring to study. Within the warps and wefts of these blankets remain traces of lost stories of handweaving from different worlds.”
—Stanley Bulbach, Handwoven (January/February 1990)