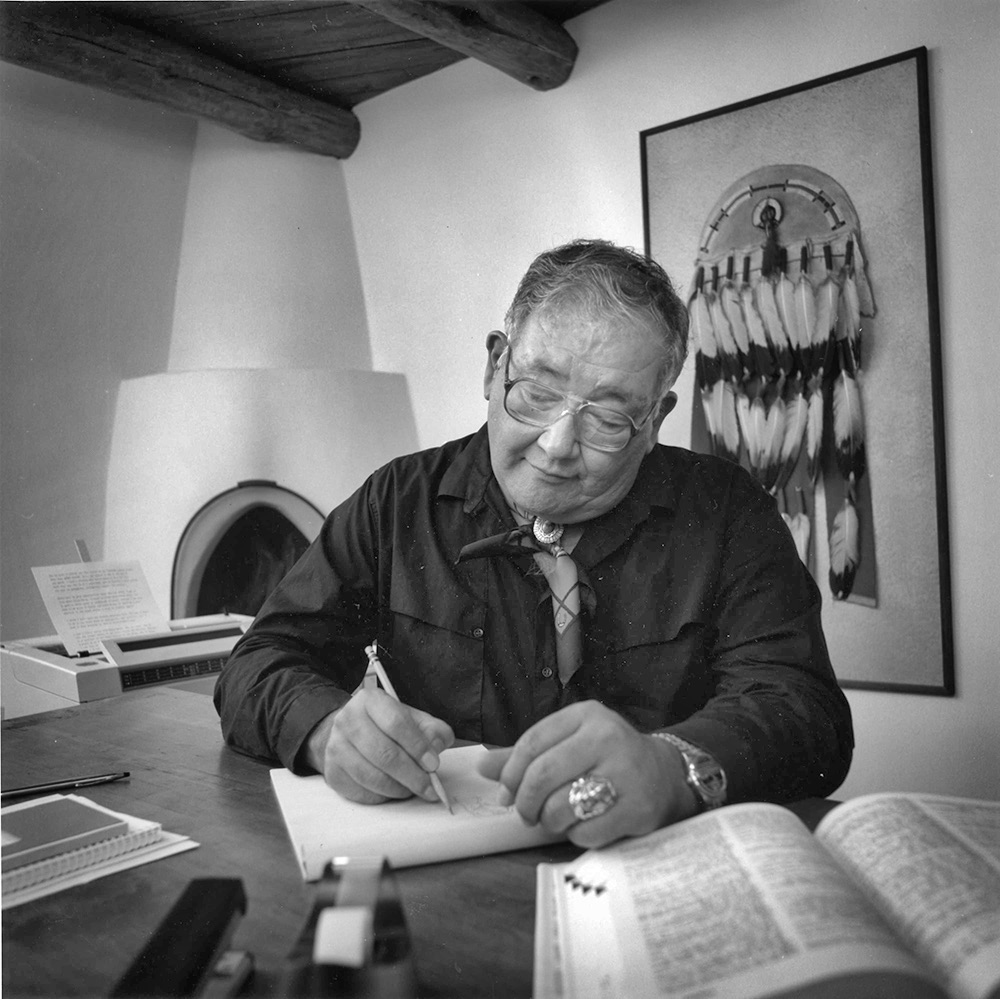 Scott Momaday is a poet, a Pulitzer prize-winning novelist, a playwright, a painter, a storyteller, and a professor of English and American literature. He is a Native American (Kiowa), and among his chief interests are Native American art and oral tradition. He has received numerous awards, including a Guggenheim Fellowship, a National Institute of Arts and Letters award, the Golden Plate Award from the American Academy of Achievement, and the Premio Letterario Internazionale “Mondello”, Italy’s highest literary award. Currently, Regents Professor of the Humanities at the University of Arizona, he is a Fellow of the American Academy of Arts and Sciences and holds 12 honorary degrees from American colleges and universities, including Yale University, the University of Massachusetts, and the University of Wisconsin.

His books have been translated into French, German, Italian, Russian, Swedish, Japanese, and Spanish and include The Complete Poems of Frederick Goddard Tuckerman (Oxford University Press), House Made of Dawn (Harper and Row), The Way to Rainy Mountain (University of New Mexico Press), Angle of Geese (David R. Godine), The Gourd Dancer (Harper and Row), The Names (Harper and Row), The Ancient Child (Doubleday), In the Presence of the Sun (St. Martin’s Press), The Man Made of Words (St. Martin’s Press), and In the Bear’s House (St. Martin’s Press). His play, The Indolent Boys was given its world premiere at the Syracuse State in 1994, and his children’s play, Children of the Sun, opened at the Kennedy Center in 1997. Circle of Wonder: A Native American Christmas Story, was published by the University of New Mexico Press, Fall 1999.

His articles have appeared in Natural History, American West, The New York Review of Books, New York Newsday, The New York Times, and other periodicals.

His paintings, drawings and prints have been exhibited in the US and abroad. A one-man, 20-year retrospective was mounted at the Wheelwright Museum, Santa Fe in 1992-1993.

Momaday has been a commentator of National Public Radio’s “All Things Considered”, he is the voice of the Museum of the American Indian, the Smithsonian Institution, the narrator of the PBS “American Experience” special, “Last Stand at Little Bighorn”, and a featured on-camera commentator on the PBS series “The West”, produced by Ken Burns and directed by Stephen Ives. He appeared on the “This I Believe” series premiere, a joint project of the Disney Channel and the Voice of America, hosted by Charles Kuralt in 1996. He has lectured and given readings in many countries of the world.

Momaday sits on the boards of The Grand Canyon Trust, the Wheelwright Museum, and is the President of the American Indian Hall of Fame. He is the founder and chairman of The Buffalo Trust a non-profit foundation for the preservation and restoration of Native American culture and heritage.