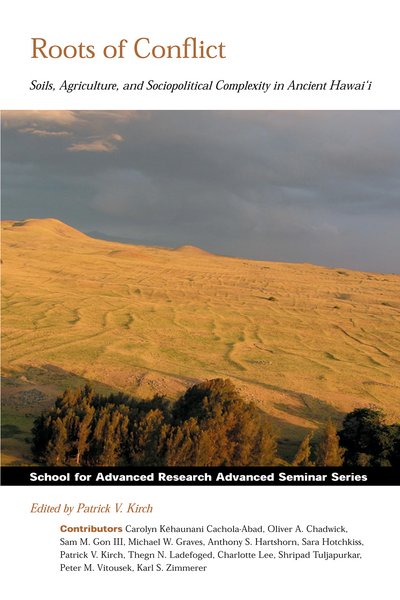 Roots of Conflict presents the efforts of a team of social and natural scientists to understand the complex, systemic linkages between land, climate, crops, human populations, and their cultural structures. The research group has focused on what might seem to some an unlikely locale to investigate a set of problems with worldwide significance: the Hawaiian Islands. Though it is perhaps the most isolated archipelago on Earth, Hawai‘i is a “model system” for teasing out key connections between land, agriculture, and society.

“Hawai‘i is the Polynesian archipelago that prehistorically developed the largest population and highest political complexity within less than a millennium of settlement. [Roots of Conflict] tells the fascinating story of those developments and uses them as a model in two senses. As a model of human societal evolution, Hawai‘i offers the advantages of comparing six major islands differing in area, elevation, rainfall, soil age and fertility, and hence human population size and social and political organization. As a model of interdisciplinary science, this book uses Hawai‘i to showcase how collaboration between archaeologists, ecologists, paleobotanists, quantitative demographers, soil scientists, and scholars analyzing oral traditions can yield conclusions far exceeding the capacity of any one of those fields alone.”
—Jared Diamond, professor of geography at UCLA and Pulitzer-prize-winning author of books including Guns, Germs, and Steel and Collapse

“When Thomas Malthus was twelve, Captain James Cook ‘discovered’ the Hawaiian islands, where in 900 years some 200 intrepid Polynesian voyagers had grown to 450,000. This comprehensive new report by members of the Hawai‘i Biocomplexity Project leads us—literally from the ground up—through soils and rainfall, via production systems, demography, and the rich genealogical traditions of the islands, to an integrated assessment of the emergence of the Hawaiian archaic state. Kirch and his colleagues provide a model for how researchers can study societies over the long term in their dynamic environments without reductionism, leaving us to marvel both at the achievements of the Polynesians and the ingenious research that here elucidates their complexity and evolution.”
—Tim Kohler, Regents Professor of Archaeology, Washington State University

“In Roots of Conflict the disciplines of archaeology, biogeochemistry, demography, ethnohistory, hydrology, palaeoecology, and pedology are for a rare moment truly integrated and focused intently on understanding human-environment dynamics…. Like great champagne, Roots of Conflict is the product of a great deal of time, effort, and talent…. I recommend Roots of Conflict as a ‘must read’ for every Pacific archaeologist who wants to understand the relationship between people and their island environment.”
—Mark D. McCoy, University of Otago, Archaeology in Oceania, vol. 46, July 2011

“Besides its obvious scholarly value for readers interested in human ecological modeling in the Pacific Islands region and beyond, the title is well-presented with a glossary of Hawaiian terms and nicely illustrated color plates.”
—Frank R. Thomas, Pacific Studies, University of the South Pacific, Suva, Fiji, Springer Online, March 18, 2012