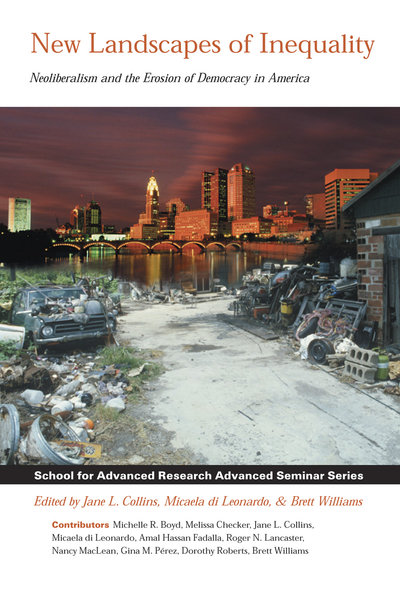 Neoliberalism and the Erosion of Democracy in America

The twenty-first century opened with a rapidly growing array of markers of human misery: endemic warfare, natural disasters, global epidemics, climate change. Behind the dismal headlines are a series of closely connected, long-term political-economic processes, often glossed as the rise of neoliberal capitalism. This phenomenon rests on the presumption that capitalist trade “liberalization” will lead inevitably to market growth and optimal social ends. But so far the results have not been positive. Focusing on the United States, the contributors to this volume analyze how the globalization of newly untrammeled capitalism has exacerbated preexisting inequalities, how the retreat of the benevolent state and the rise of the punitive, imperial state are related, how poorly privatized welfare institutions provide services, how neoliberal and neoconservative ideologies are melding, and how recurrent moral panics misrepresent class, race, gendered, and sexual realities on the ground.

“For me, one of the great strengths of the collection is its anthropological ethos which produces a consistent concern with how such changing landscapes and emerging formations are inhabited, adapted and contested by subordinated groups. In bleak times, this attention to the specificity of particular formations and to the forms of agency available to subordinated groups (in however cramped and pressured forms) is very welcome.”
—John Clarke, Open University, Critical Social Policy, August 2009

“New Landscapes of Inequality…speaks on the growing inequality of America which slowly increase[s] the gap between those living in ghettos and those living in posh cities….A collection of scholarly essays on the subject from some of the most educated thinkers on the subject, New Landscapes of Inequality is sure to appeal to those with an unquenchable first [sic] for political opinions and ideas.”
—James A. Cox, Small Press Bookwatch, August 2008

“The book is extremely timely, with original and cutting-edge perspectives.”
—Faye V. Harrison, University of Florida

“This timely, gloomy, informative and illuminating volume brings together an interdisciplinary set of voices to reveal what happens when ‘markets rule,’ the state retreats from its legal and moral duties, and ‘punitive governance’ becomes the norm.”
—Alisse Waterston, John Jay College of Criminal Justice, CUNY