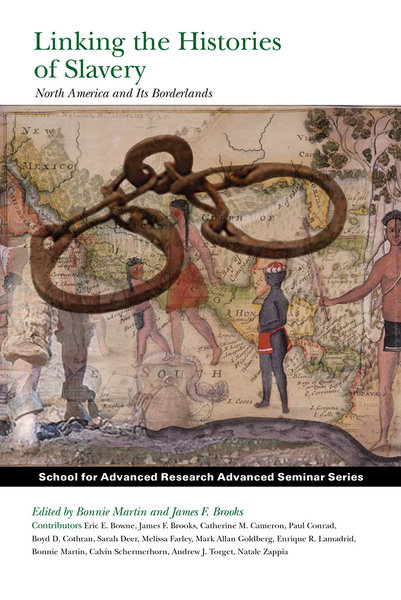 Linking the Histories of Slavery

North America and Its Borderlands

This volume has brought together scholars from anthropology, history, psychology, and ethnic studies to share their original research into the lesser known stories of slavery in North America and reveal surprising parallels among slave cultures across the continent. Although they focus on North America, these scholars also take a broad view of slavery as a global historical phenomenon and describe how coercers and the coerced, as well as outside observers, have understood what it means to be a “slave” in various times and cultures, including in the twentieth and twenty-first centuries. The contributors explore the links between indigenous customs of coercion before European contact, those of the tumultuous colonial era, some of the less familiar paradigms of slavery before the Civil War, and the hazy legal borders between voluntary and involuntary servitude today. The breadth of the chapters complements and enhances traditional scholarship that has focused on slavery in the colonial and nineteenth-century South, and the contributors find the connections among the many histories of slavery in order to provide a better understanding of the many ways in which coercion and slavery worked across North America and continue to work today.

“Linking the Histories of Slavery enrich[es] the scholarship on American slavery by using case studies not only to provide links between various times and places but also to draw connections among themes that inform slavery studies. The threads weave together to reveal a pulsing, dynamic history of slaveries that will benefit educators, challenge scholars, and force all of us to question the present.”
– Kelly Houston Jones, Austin Peay State University, Journal of Southern History, February 2018

“The editors ably pull together what otherwise might be an eclectic collection of essays through an insightful introduction, as well as introductions to each part of the book. . . . This book should be of interest to scholars of slavery and of Native America, especially those interested in the west in the nineteenth century. Individual essays could easily be assigned to undergraduate classrooms, while as a whole the book offers significant food for thought for all scholars of unfree labor systems in North America.”
— Michelle LeMaster, Lehigh University, Labor, December 2017

“This ambitious anthology asks whether we can more fully comprehend slavery by examining it across space, time, and disciplinary divides. . . . Instead of offering a loose collection of essays stitched together only by an introduction, the editors and authors have produced an innovative book that lives up to its title, drawing parallels between various regions and eras of North American history through the present. . . . Integrating histories and disciplines long viewed as separate, this groundbreaking volume yields new perspectives on slavery and migration, making it essential reading for those who study the past or present.”
— Gregory Wingmore, University of California, Davis, Journal of American History, September 2017

“This volume expands the spatial, temporal, intercultural, and transnational dimensions of human trafficking in North America. Most important, Linking the Histories of Slavery encourages scholars to continue to piece together the ‘continental epic’ of slavery among and between Native and Euro-American societies (xvi).”
— Alexis Smith, Indiana University, Ethnohistory, January 2017

“Joining those who approach slavery as a dynamic global phenomenon—and not a legal institution destroyed during the nineteenth century—the authors’ collective objective is to draw links between agents within particular slaving zones and the different analytical lenses scholars have deployed to study these interactions. This impressive collection accomplishes both. . . . Ultimately, this wide-ranging, well-organized, and provocative set of essays will offer something to nearly every student of North American slavery.”
— Max Flomen, UCLA, Journal of Anthropological Research, December 2016

“Anyone who wants to understand slavery as a global institution would do well to start with Bonnie Martin and James Brooks’s beautifully edited Linking the Histories of Slavery. It is an eye-opener.”
— Ira Berlin, Distinguished Professor of History, University of Maryland

“One of the many challenges facing scholars of slavery is how to integrate our narratives of indigenous and African slaveries in the Americas. This wonderful, must-read volume charts an interdisciplinary course for how that emergent narrative might look in North America and its borderlands.”
— Rebecca Anne Goetz, Associate Professor of History, New York University

PART I. Links to Early Slavery