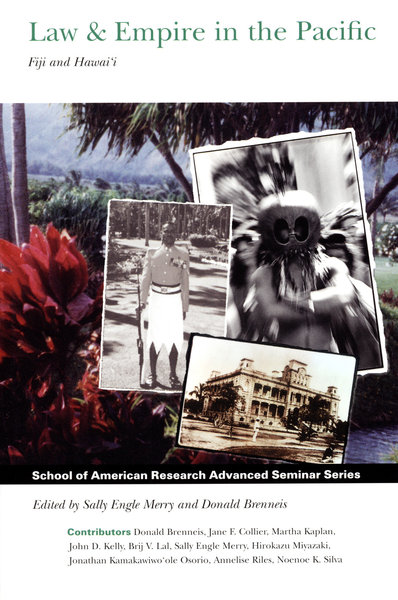 Law & Empire in the Pacific

Hawai’i and Fiji share strikingly similar histories of colonialism and plantation sugar production but display different legacies of ethnic conflict today. Pacific Island chiefdoms colonized by the United States and England respectively, the islands’ indigenous populations were forced to share resources with a small colonizing elite and growing numbers of workers imported from South Asia. Both societies had long traditions of chiefly power exercised through reciprocity and descent; both were integrated into the plantation complex in the nineteenth century. Colonial authorities, however, constructed vastly different legal relationships with the indigenous peoples in each setting, and policy toward imported workers also differed in arrangements around land tenure and political participation. The legacies of these colonial arrangements are at the roots of the current crisis in both places.

Focusing on the intimate relationship between law, culture, and the production of social knowledge, these essays re-center law in social theory. The authors analyze the transition from chiefdom to capitalism, colonizers’ racial and governmental ideologies, land and labor policies, and contemporary efforts to recuperate indigenous culture and assert or maintain indigenous sovereignty. Speaking to Fijian and Hawaiian circumstances, this volume illuminates the role of legal and archival practice in constructing ethnic and political identities and producing colonial and anthropological knowledge.

“Law and Empire has tried to move away from the dangerous terrain of merely cultural representations, towards a theory which encompasses the processes of law as fundamental in solidifying power, property and society. In so doing, it simultaneously analyses, explains, and provokes a multitude of questions….”
—Dr. Christine Stewart, Journal of Pacific History Vol. 39, no. 3 (2004)

“The ways that the colonial and postcolonial experiences of Hawai’i and Fiji are similar, different, and related to each other, in particular in the realm of law…has hitherto eluded serious scholarly comparison…. This is a book that can have a lot of impact…among people who are interested in the formation and reformations of racial and class systems and those who seek to understand the outworkings of colonial systems in a postcolonial era.

This collection is a welcome addition to the anthropology of law and Pacific ethnology….”
—Dr. Paul R. Spickard, University of California, Santa Barbara

“This exciting [book]….will be a welcome addition to the fields of the anthropology of law and the anthropology of the Pacific, as well as colonial history and interdisciplinary work on rights movements and indigenous politics.”
—Dr. Bill Maurer, University of California, Irvine

“This is an important work and a considerable addition to scholarship in its field. By throwing a clear light on the colonial history of both places it succeeds in putting present problems and developments into a sharp contemporary context.”
—Dr. Ken Brown, The Journal of Pacific Studies

“This volume inquires into how the differing legal legacies of Fiji and Hawai`i have contributed to the present political structures and ethnic turmoil. This collection is a welcome addition to the anthropology of law and Pacific ethnology.”
—Dr. Richard Scaglion, Journal of Anthropological Research

“[This] volume is an important contribution to scholarly understanding of the postcolonial Pacific. And as the article by [Brij V.] Lal…makes poignantly clear, these are not issues of mere scholarly concern; they go to the very heart of a people.”
—James Turner, Anthropos 101, 2006

“This book is a valuable addition to scholarship on comparative colonialisms, anthropology of law, Pacific history and the consequences of categorizations.”
—Ilana Gershon, Pacific Affairs Vol. 78, no. 2 (Summer 2005)

“The contributors analyze the transition from chiefdom to capitalism, colonizers racial and govenmental ideologies, land and labor policies and contemporary efforts to recuperate indigenous culture and assert or maintain indigenous sovereignty….The people who are interested in the formation and reformation of racial and class systems and those who seek to understand the outworking of colonial systems in the postcolonial era will welcome this study.”
—Educational Book Review, May-June, 2004