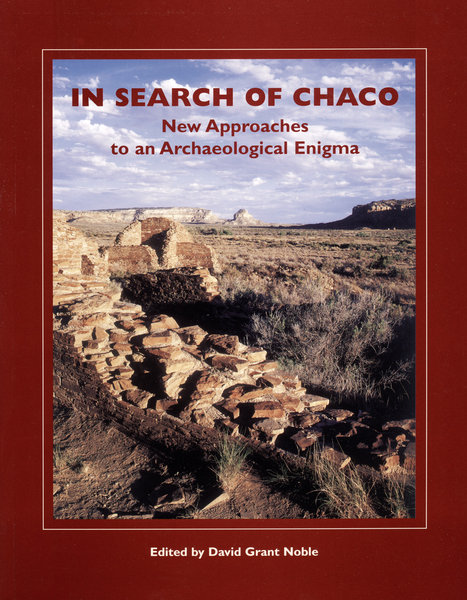 In Search of Chaco

New Approaches to an Archaeological Enigma

Startling discoveries and impassioned debates have emerged from the “Chaco Phenomenon” since the publication of New Light on Chaco Canyon twenty years ago. This completely updated edition features seventeen original essays, scores of photographs, maps, and site plans, and the perspectives of archaeologists, historians, and Native American thinkers. Key topics include the rise of early great houses; the structure of agricultural life among the people of Chaco Canyon; their use of sacred geography and astronomy in organizing their spiritual cosmology; indigenous knowledge about Chaco from the perspective of Hopi, Tewa, and Navajo peoples; and the place of Chaco in the wider world of archaeology.

For more than a century archaeologists and others have pursued Chaco Canyon’s many and elusive meanings. In Search of Chaco brings these explorations to a new generation of enthusiasts.

“[David] Noble’s book is a treasure of questions and possibilites. These lucid essays are drawn not only from authors, researchers and professors … in archaeology, archaeoastronomy, anthropology and architecture, [and] also from respected American Indian authors and scholars….All brim with energy–not one is simply a didactic exercise.”
—Barbara Riley, Santa Fe New Mexican

“…this book brings understanding of the Chaco world up to the present, with revealing and accessible essays by many of its best-known researchers…and three prominent Native American scholars…. [This book] is a highly recommended pleasure for everyone drawn to the mysteries of the Southwest’s human past.”
—Richard Polese, Southwest BookViews

“This impressive volume gives us many new ideas and directions for solving….[t]he enigma of Chaco Canyon….”
—Mark Michel, American Archaeology

“[In Search of Chaco] is a book that belongs on the shelf of anyone with an interest in the region’s prehistory.”
—David A. Phillips Jr., New Mexico Historical Review Vol. 81, no. 3 (Summer 2006)