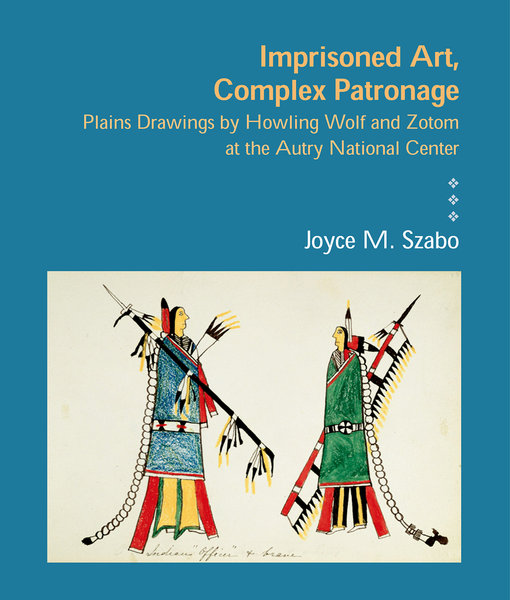 Two small books of vivid drawings—one filled with images by the Southern Cheyenne warrior-artist Howling Wolf and the other with images by Zotom, a Kiowa man—came to the Southwest Museum of the American Indian, now part of the Autry National Center, in December 1986. The books were gifts from Leonora Curtin Paloheimo, and had been commissioned directly from the artists in 1877 by Paloheimo’s grandmother, Eva Scott Muse Fényes (1849–1930). At the time Fényes commissioned the books, Zotom and Howling Wolf were imprisoned at Fort Marion in Saint Augustine, Florida. Like some of the other Southern Plains Indian prisoners held there between mid-1875 and mid-1878, the two men created many drawings for diverse reasons. Some of the prisoners’ books of drawings, including the two that Fényes collected, were sold to people who visited the sixteenth-century Spanish fort.

After Eva Scott Fényes’s death, the books went to her daughter, Leonora Muse Curtin (1879–1972), and subsequently they were passed to Leonora Curtin Paloheimo (1903–1999). More than one hundred years after their creation, the books became part of the Southwest Museum’s collections. Unlike most of the museum’s other holdings of Native American art, these two books originated with a commission by Fényes, a young woman who continued as a patron of the arts for the remainder of her life.

The study of what has become known as Plains Indian ledger art—because the artists frequently used accountants’ ledger books as sources of paper—and of Fort Marion drawings in particular, has burgeoned in the last forty years. Joyce Szabo’s examination of the two drawing books by Zotom and Howling Wolf encompasses their origins and the issues surrounding their commission as well as what the images say about their creators and their collector. Szabo augments the complete reproduction of each page with detail photographs of the drawings.

“Plains Indian ledger art, so named because the artists used discarded ledger books for their sketches, has come into its own during the last 40 years. A gift of two ledgers to the Southwest Museum of the American Indian, now part of the Autry National Center, is the basis for this delightful book by Szabo (Univ. of New Mexico). Howling Wolf and Zotom at last receive an audience for their artistic creations during their imprisonment at Fort Mation in Saint Augustine, Florida, during the 1870s—far from their Cheyenne and Kiowa villages. These ledgers originally were commissioned by painter Eva Scott Muse Fényes, a young woman who worked tirelessly to preserve remaining vestiges of the vanishing western culture and placed great value on the renderings of these Indian prisoners. The drawings are visual narratives that tell poignant stories of a vanishing way of life. They provide insight into the lives, histories, and mind-sets of these Native peoples. The volumes do not contain a continuous story line; instead each drawing is an entity unto itself, a key to an event. Szabo brings expertise and empathy to this important volume, which is enhanced by numerous beautifully rendered color illustrations. Summing Up: Highly recommended. Lower-level undergraduates and above; general readers.”
—A. Wirkkala, Choice, May 2012 vol. 49 no. 09

“Szabo’s informed description and analysis become an important resource to scholars of these so-called ledger drawing books. Page-by-page studies are essential to the field, and here Szabo calls attention to the physical nature of such books and how the drawings, particularly those now separated from their bindings, frequently appear, misleadingly, like self-contained works of art.”
—Phillip Earenfight, Dickinson College, Great Plains Quarterly, Summer 2012, vol. 32.3

“For anyone interested in the development of Plains Indian representational art in general—and works emanating from the Fort Marion experience in particular—Joyce Szabo’s Imprisoned Art, Complex Patronage is a must-read and a must-have contribution of rare significance.”
—Ron McCoy, Oklahoma State University, Stillwater, Journal of Anthropological Research, vol. 69, no. 1, 2013