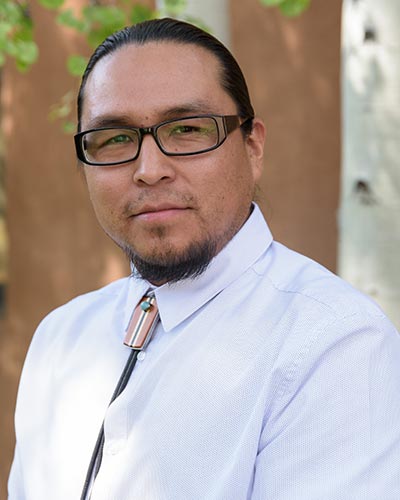 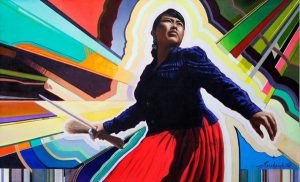 Montoya’s work has been influenced by graffiti, the surrealist movement, the work of his peers, music, and his faith in his Pueblo heritage. He paints in both acrylic and oil and intentionally works to produce imagery that combats common stereotypes or romanticized notions of Native American and Indigenous peoples. It is his faith in his being, heritage, culture and his connection to all other beings that drives his creative work.

Though I am highly influenced or provoked by interactions within modern society and gain substance through my observation of social movements, world affairs, and the influx of technologies within the last two decades, this is not where my inspiration lays. Ultimately, it is this overabundance of modern behaviors within my life that inspires me to look toward traditional indigenous teachings and philosophies to contest the impending takeover.

While in residence at SAR, Montoya’s goal is to create an installation, including four large paintings and two sculptures. The paintings will represent various natural and constructed principles found in our world, relating to the number four, such as the elements, directions and seasons. The abstract sculptures will take on the personality of either a masculine or feminine being. “The full installation will speak to how our human existence is connected to and influenced by certain properties of this world, and by one another”.

Warren Montoya is a painter and sculptor from Tamaya (Santa Ana Pueblo) and Kha’Po Owingeh (Santa Clara Pueblo.) During his time at SAR, Montoya has been working on an installation made up of four large paintings and two sculptures.

Find out more about this event >