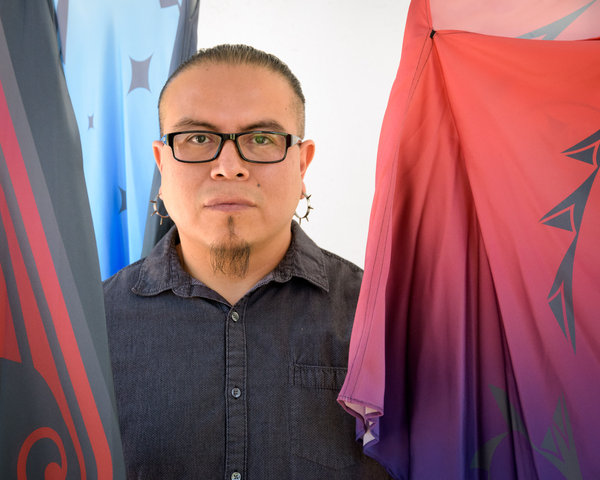 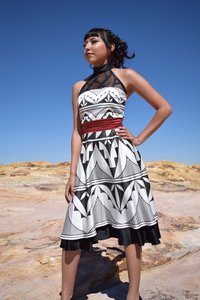 The School of Advanced Research is pleased to welcome Loren Aragon as the 2017 Ronald and Susan Dubin Fellow. Aragon comes from Acoma Pueblo and is the founder of ACONAV, a fashion brand specializing in women’s couture evening wear. He was awarded first place at the Santa Fe Indian Market Designer Challenge in the Adult Contemporary category in 2016.

Aragon’s artistic development began under the mentorship of his mother and aunt, both life-long seamstresses, and then continued with his uncle in tailoring and the visual arts. Observing his elders’ work became the foundation of his interest in fashion design, and coupled with a background in engineering, has led to his exploring metal work and fabrication. Aragon has emerged into fashion design, allowing him to engage in both art and physical technology.

Couture fashion allows me to capture ideas predominantly influenced by the pottery culture and traditional dress of my Acoma people. … I continue to seek new ways to expand upon my creativity as a fashion designer while maintaining a connection to my Acoma Pueblo heritage.

While at SAR, Aragon looks forward to accessing the IARC collection as well as researching methods and techniques in textile, jewelry and fashion design. He expects to learn and employ new or less practiced techniques and to develop textiles and works in metal for use in haute couture design. Aragon’s aim is to create and display a capsule collection during his fellowship. He writes, “The collection will include four individual, one-of-a-kind pieces ranging in design detail, to display the work in textile design and the incorporation of ornamental work with various materials including metal work.”

Aragon has challenged himself to find new and undiscovered ways to represent indigenous art with the hopes of igniting the interests of future generations. Art serves as a connection to his cultural and spiritual identity. Through his creations Aragon shares beliefs, maintains a connection with his origins and reveals his own identity. Aragon will be in residence from June 19-August 15, 2017.

Acoma fashion designer and jeweler, Loren Aragon has been working to create a capsule collection inspired by his time at the Indian Arts Research Center. Join the School for Advanced Research on August 10 to hear about Loren Aragon’s experience as the 2017 Ronald and Susan Dubin Native Artist Fellow. The evening will conclude with a visit to the Dubin Studio to see his work, presented as a fashion show.