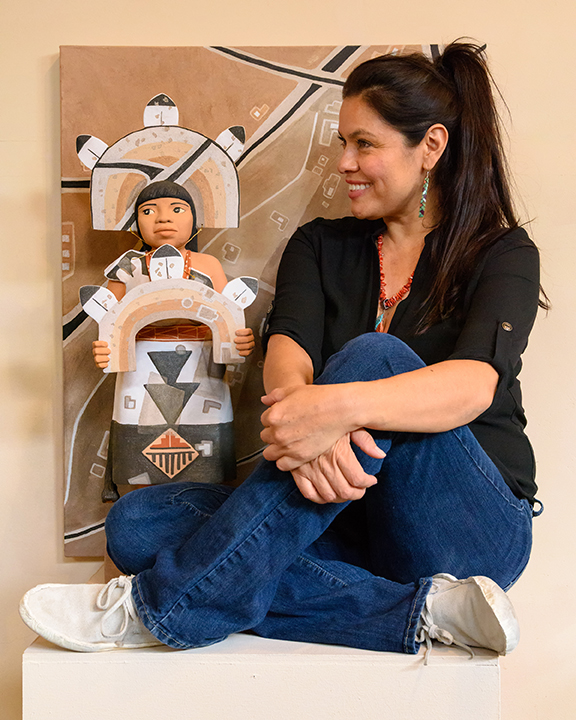 SAR is pleased to welcome Kathleen Wall as the 2016 Eric and Barbara Dobkin Native Artist Fellow. Wall is a Jemez Pueblo potter continuing the tradition passed on to her by her mother and grandmother. In recent years, she has added painting to her artistic repertoire and plans to incorporate the two arts in her project at SAR.

Wall will concentrate on researching Native American personal names that contain references to specific geographic locations. She sees this tradition as a significant custom that ties individuals directly to their communities. She tells us, “My grandfather’s name is Louis Loretto although his Indian name is Kal la. Kal la refers to a hillside on the west side of our village.” Kathleen’s project will be complex. She plans to build pottery portraits that will be partnered with paintings illustrating their Native, personal names—physically connecting the individual to their geographic, linguistic location.

While at SAR, Wall intends to utilize the Indian Arts Research Center collection to further her knowledge of traditional Native place-names and people. The subject matter is of utmost importance to Wall as she has noticed that as populations grow, many people lack appreciation for the land they live on as well as that of their ancestors. She hopes that by connecting people to place, appreciation for the land will increase.

Kathleen Wall learned traditional Pueblo pottery from Fannie Loretto (mother), Dorothy Trujillo, Mary Toya, Edna Coriz and Alma Concha (aunts). She has an AA and a BA degree from the Institute of American Arts. She has participated in many group shows and two solo shows and was the 2000 Southwest Association for Indian Arts Fellowship recipient. In 2006 she received a commission from the Smithsonian Institute to create a storyteller for First Lady Laura Bush to be presented at the Congressional Club ‘First Lady’s Luncheon”. Most recently, Wall received a solo exhibition at the Pablita Museum of Indian Women in the Arts in Santa Fe titled, Harvesting Traditions. Wall will be in residence at SAR from March 1—May 31, 2016.

Join the School for Advanced Research on May 26 to hear about her experience as the 2016 Eric and Barbara Dobkin Native Artist Fellow. The evening will conclude with a visit to the Dubin Studio to see Wall’s work.