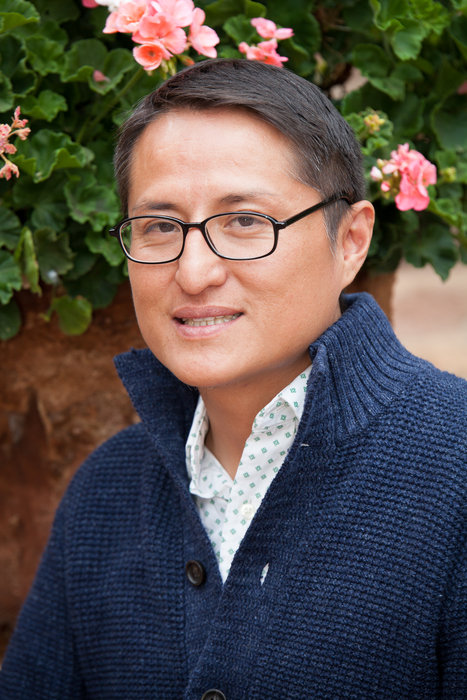 The School for Advanced Research is pleased to welcome Navajo weaver Marlowe Katoney, as the 2015 Rollin and Mary Ella King Fellow. Originally trained as a painter, Katoney incorporates his painterly aesthetics into his weavings.

A relative newcomer to the field, Katoney acknowledges the difficulty of becoming a skilled weaver because of the years of experience needed to master this craft. However, he believes that approaching the weaving as a painter provides him with a unique perspective for developing a different aesthetic. An explorer in the weaving world, he writes:

For me, being an artist is an ongoing pursuit of freedom. It’s of the aesthetic of not being limited to the notion of having to abide by the popular [perceptions] of beauty or to create something readily identifiable as being “Navajo” but instead it’s to deconstruct old ideas to create new ones. I found that often times other people’s notion of beauty are not necessarily my own. Under those circumstances, I find it a necessity to examine “the other” which some people may find unsavory or bland and reinvent it giving it new life. Addressing subject matter and composition in this way contextualizes traditional Navajo weaving into contemporary art.

While at SAR, Katoney plans to delve into the IARC’s extensive textile collection to stimulate his academic growth and produce a new pictorial weaving. He expects to be exposed to a wide spectrum of perspectives from historical Navajo weaving to contemporary concepts of design and subject matter.

Of continued interest to Katoney, the human figure will act as a vehicle for both subject matter and composition. In addition to exploring figurative designs, Katoney plans to utilize various weaving techniques and experiment with non-traditional color combinations. “Creating a work for the SAR collection will allow me the artistic freedom to create a work without the angst of compromising my artistic freedom to meet a widely expected notion about Navajo weaving.”

Katoney will be in residence at SAR from September 1 to December 1, 2015.