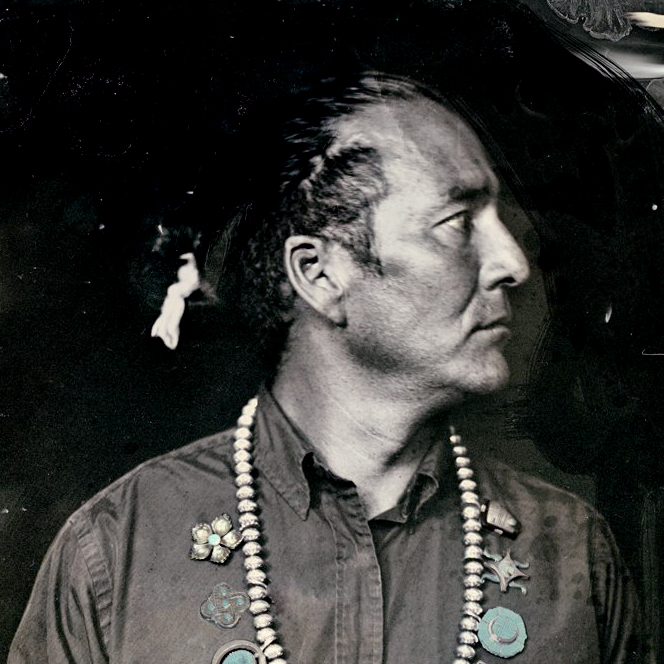 Widely recognized for his unusual approach to the world of photography, William Wilson, Navajo, has received many awards including the prestigious Eiteljorg Fellowship for Native American Fine Art in 2007 and the Native Arts and Culture Foundation Artistic Innovation Award in 2010. He was also formerly an instructor at the Institute of American Indian Arts. While at SAR, Wilson will work on “Critical Indigenous Photographic Exchange” (CIPX), which depicts contemporary Native artists and art professionals via nineteenth-century photographic processes.

Video 1: Will Wilson working in the Dubin Studio during his fellowship during the fall of 2013. Video 2: Will Wilson Artist Talk on November 14, 2013. Videography and video editing by SAR volunteer John Sadd

As an indigenous artist working in the 21st century, employing media that range from historical photographic processes to the randomization and projection of complex visual systems within virtual environments, I am impatient with the way that American culture remains enamored of one particular moment in a photographic exchange between Euro-American and Aboriginal American societies: the decades from 1907 to 1930 when photographer Edward S. Curtis produced his magisterial opus The North American Indian. For many people even today, Native people remain frozen in time in Curtis photos. Other Native artists have produced photographic responses to Curtis’s oeuvre, usually using humor as a catalyst to melt the lacquered romanticism of these stereotypical portraits. I seek to do something different. I intend to resume the documentary mission of Curtis from the standpoint of a 21st century indigenous, trans-customary, cultural practitioner. I want to supplant Curtis’s Settler gaze and the remarkable body of ethnographic material he compiled with a contemporary vision of Native North America.

I propose to create a body of photographic inquiry that will stimulate a critical dialogue and reflection around the historical and contemporary “photographic exchange” as it pertains to Native Americans. My aim is to convene with and invite indigenous artists, arts professionals, tribal governance and non-Native allies to engage in the performative ritual that is the studio portrait. This experience will be intensified and refined by the use of large format (8×10) wet plate collodion studio photography. This beautifully alchemic photographic process dramatically contributed to our collective understanding of Native American people and, in so doing, our American identity.

William Wilson will be in residence September 1–December 1, 2013. For additional information, visit Wilson’s website at: https://willwilson.photoshelter.com.