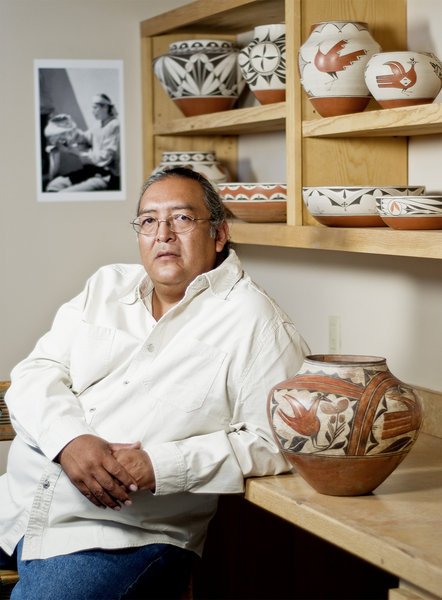 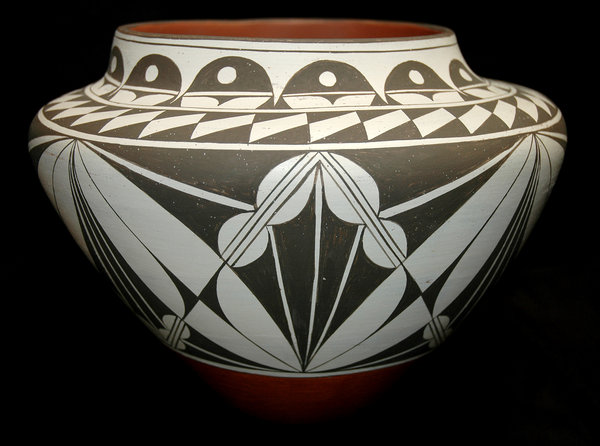 Zia potter Ulysses Reid spent many years dedicating himself to his tribe by working for the Pueblo of Zia language and cultural preservation program. While working for the Pueblo, Ulysses coordinated several community pottery projects with expert potter Lois Medina. It was during these programs that he learned the locations of mineral paints and clays.

His formal training started in 2004 when he was awarded a Folk Art Apprenticeship Grant from the New Mexico Arts to work with his mentor Rufina Panana. In a very short amount of time, Ulysses became known for his work with Zia and Mesa Verde pottery designs.

While at the Indian Arts Research Center, Ulysses will embark on a very personal journey by working closely with the IARC’s Henate Collection. The collection consists of almost 200 pottery design sketches by Andres Galvan. Ulysses, who is Galvan’s grandson, will be producing pottery and using the sketches in honor of his grandfather.

Ulysses has shown at several art shows such as the Santa Fe Indian Market and Native Treasures Indian Arts Festival. He also currently serves on the advisory boards of the New Mexico Historical Records and the Museum of Indian Arts & Culture.

Ulysses will be in residence from June 15–August 15, 2009. The School for Advanced Research is pleased to welcome Ulysses Reid as the 2009 Ronald and Susan Dubin Native Artist Fellow.