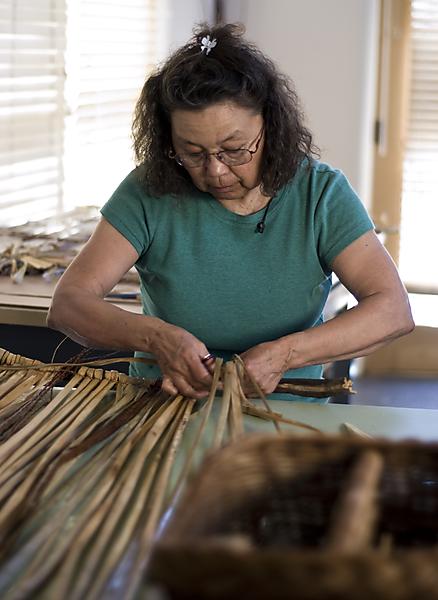 Pat Courtney Gold, a Wasco basketmaker, grew up on the Warm Springs Reservation in the mid-Columbia River area of central Oregon. In her youth, she was taken to a Bureau of Indian Affairs boarding school. Eventually, she went on to earn a B.A. in mathematics and physics from Whitman College, and became a professional mathematician and computer specialist. She never forgot, however, childhood visits with her mother to museums displaying traditional Wasco artwork. In 1991, Pat studied and helped revive the making of Wasco “sally bags,” twined root-digging bags, launching her on a new career path dedicated to the preservation of her cultural heritage.

Pat’s accomplishment as an artist is evinced by her long-standing commitment to both traditional and experimental basketmaking techniques, and the recognition she has received for her work. In 2007, she was honored by the National Endowment of the Arts with the National Heritage Award. In 2006, she was featured in National Public Broadcasting’s “Craft in America,” which aired over public stations in the U.S. and toured as an exhibition. Her work has been collected and exhibited by museums all over the world, including the British Museum, London, England; Hei Tiki Gallery, Rotorua, New Zealand; the Royal British Columbia Museum, Victoria, Canada; and the Smithsonian’s National Museum of the American Indian, Washington, DC.

As a master weaver, Pat will be utilizing the Indian Arts Research Center collections to research and gain inspiration for the creation of her two-dimensional wall hangings. The School for Advanced Research is pleased to welcome Pat Courtney Gold as the 2009 Eric and Barbara Dobkin Fellow.