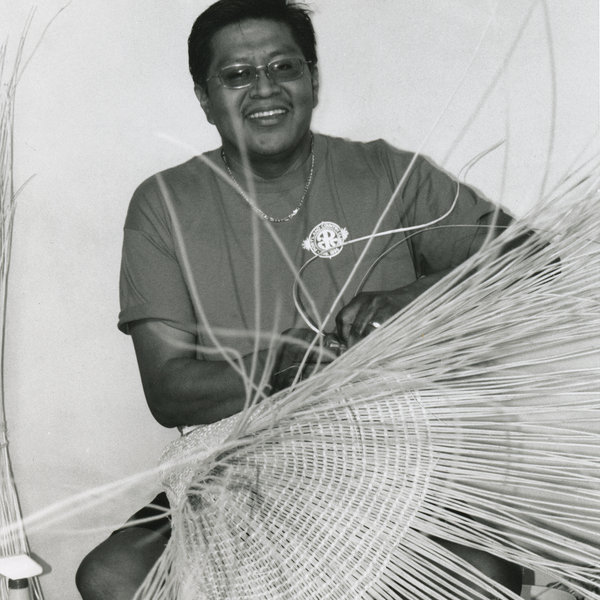 Although his work has been influenced by many Southern Paiute basket weavers of the past, it was his paternal grandmother, Lila Benson Rogers, who most inspired him. In 1999, he visited the Lost City Museum in Overton, Nevada, which exhibits artifacts from Pueblo Grande de Nevada, saw all the wonderful Paiute baskets, and remembered his grandmother making these baskets. “As a child I warmly recall sitting next to my grandmother, Lila, playing with my trucks and other toys, as she worked on her baskets. Sometimes she would gather willows along a creek in Utah or Nevada, collecting different sizes of willow for different baskets, while I would play or wade in the water.” After his visit to the museum, he went home and gathered some local sumac, and as he began splitting and weaving, he found that the process came naturally to him.

Besides learning from his grandmother how to make baskets, he learned from other relatives to bead, tan hides, sew, create traditional objects (such as bows), chip arrowheads, what time of the year to gather plants, what to use them for, and what plants to eat or not to eat. His traditional and material culture interests him, but for now he enjoys the challenge of creating baskets. “My ultimate desire and challenge is to create very fine ‘Panamint’ style coiled baskets.”

Everett is the only Southern Paiute weaver north of the Grand Canyon who is actively producing work for sale. He has exhibited and demonstrated in Nevada, California, Arizona, and New Mexico. Last September he was a featured artist at the Museum of Northern Arizona’s first Native Artists Market. His works are found in numerous private and public collections, including the Smithsonian in Washington, DC; the Nevada State Museum in Reno; and the Museum of Indian Arts and Culture in Santa Fe.

Everett passes on his knowledge to other Southern Paiutes and encourages them to follow traditional basket designs, styles, material, and thought in their individual basketry, for he hopes to ensure that this ancient art form will continue well into the 21st century.