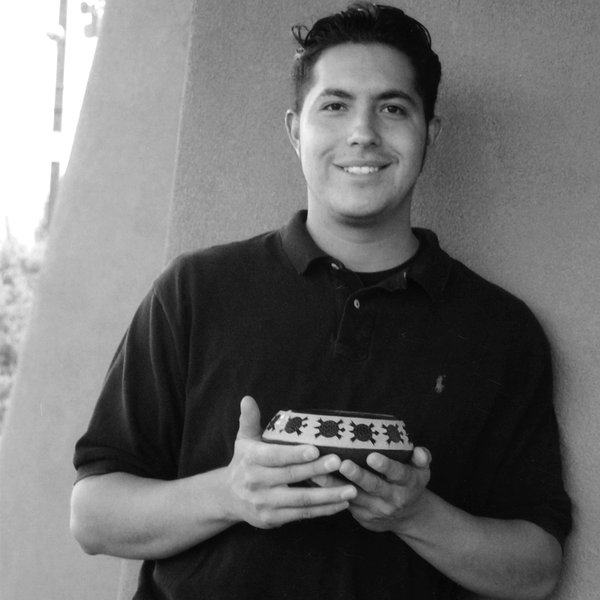 We are pleased to welcome Elijah Naranjo Smith, the 2003 Ron & Susan Dubin Native American Artist Fellow. Elijah is from Santa Clara Pueblo and comes from a long line of Santa Clara potters. He works with traditional clays and firing methods to produce black, brown, and red combination pots with sgrafitto designs.

“I began working on pottery in 1999,” Elijah explains. “I became interested in pottery because I was amazed by how beautiful it was and is. I tried to make pottery thinking that it would be easy to create such beauty. I have found that it is extremely difficult to create beautiful pottery. In my eyes, I am not artistically gifted at all. I love the challenge of trying to create something that comes so hard to me.”

Before winning the Dubin Fellowship, Elijah spent time at IARC as a volunteer, helping to move the large pieces during IARC’s recent renovation of its vaults. As he observed the oversized pieces being moved from one side of the vault to the other, he developed a desire to make large pots, which present difficult challenges to the artist.

Elijah has attended the University of New Mexico and New Mexico Highlands University. The Heard Museum and several galleries in Santa Fe, Albuquerque, and Denver have shown his work.

Elijah will be working at the Dubin Studio from June 16th through August 16th. Please stop by to welcome him or watch him work.