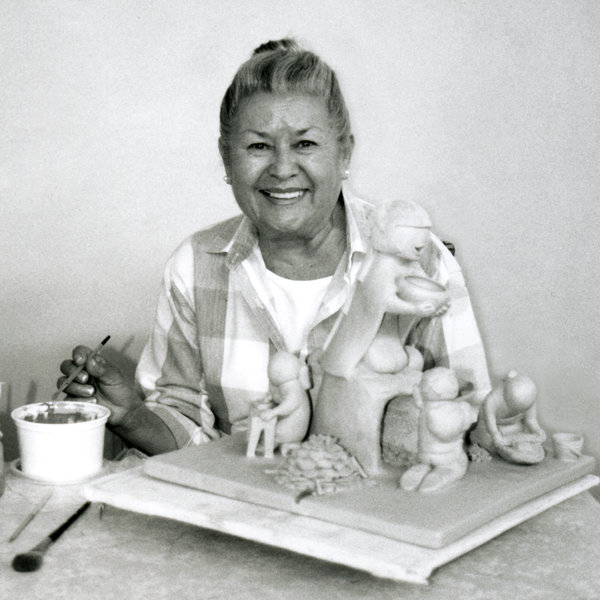 “The experience at the Indian Arts Research Center has made me feel more appreciated in the art world—sometimes ribbons and sales are not enough to make you aware that there are people out there who care about your work,” writes Stella Teller, SAR’s first Eric and Barbara Dobkin Native American Artist Fellow.

Stella Teller, a Southern Tiwa from Isleta Pueblo, was awarded the three-month Eric and Barbara Dobkin Native American Artist Fellowship in March 2001. Stella works with graceful ceramic male and female storytellers, whimsical story bears, and other animals in muted hues of gray-blue, white, and burnt sienna. Known for the subtle changes she brings to her figures, she makes it her business to know her craft and her supporters. Responding to ideas that come from the heart and mind, she translates those ideas to presentation. Stella is a self-taught potter who has been working with clay since the age of eight. She derives inspiration from her commitment to her family, her heritage, and the world around her.

During her three-month tenure at SAR, Stella created, “Gifts from Mother Earth,” illustrating how Mother Earth—depicted through a female figure holding a pottery vessel—gives her gifts of clay to the people. Centrally placed on a platform, Mother Earth is surrounded by smaller human figures that demonstrate the steps in crafting a single vessel crafted from clay: gathering the clay; and shaping, polishing, painting and firing a newly formed vessel. Not only is this a beautiful work of art; it serves as a fine educational tool.

Stella has worked with the Indian Pueblo Cultural Center in Albuquerque and is the recipient of many national awards including those at the Santa Fe Indian Market, the Heard Museum Invitational show, the Big Lake Trading Post Museum show, and the New Mexico International Women’s Conference. Images of her work have appeared in Arizona Highways, Southwestern Pottery, and Talking with the Clay. Her work is found in private and museum collections.