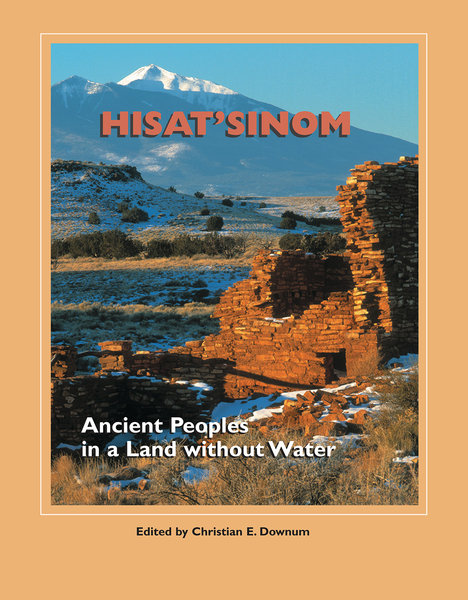 Ancient Peoples in a Land without Water

The national monuments of Wupatki, Walnut Canyon, and Montezuma’s Castle showcase the treasures of the first people who settled and developed farms, towns, and trade routes throughout northern Arizona and beyond. The Hopis call these ancient peoples “Hisat’sinom,” and Spanish explorers named their hard, arid homeland the sierra sin agua, mountains without water. Indeed, much of the region receives less annual precipitation than the quintessential desert city of Tucson. In Hisat’sinom: Ancient Peoples in a Land without Water, archaeologists explain how the people of this region flourished despite living in a place with very little water and extremes of heat and cold.

Exploiting the mulching properties of volcanic cinders blasted out of Sunset Crater, the Hisat’sinom grew corn and cotton, made and traded fine cotton cloth and decorated ceramics, and imported exotic goods like turquoise and macaws from hundreds—even thousands—of miles away.From clues as small as the tiny fingerprints left on children’s toys, postholes in the floors of old houses, and widely scattered corn fields, archaeologists have pieced together an intriguing portrait of what childhood was like, the importance of weaving cotton cloth, and how farmers managed risk in a harsh environment. At its peak in the late 1100s, Wupatki stood as the region’s largest and tallest town, a cultural center for people throughout the surrounding region.

It was a gathering place, a trading center, a treasury of exotic goods, a landmark, and a place of sacred ritual and ceremony. Then, after 1200, people moved away and the pueblo sank into ruin.

“A superb summary of the deep Native history in the area around Flagstaff, Arizona—the archaeological Sinagua region. What a lively history it was: volcanic eruptions; Chaco-meets-Hohokam geopolitics; violence on the frontiers! And, of course, families, clans, and villages that survived and even thrived amid alarms and excursions. This strikingly-illustrated volume is the ‘go-to’ resource for Sinagua. Leading researchers present their recent discoveries and new syntheses of past work. Insightful chapters by Native scholars remind us that the story continues today at the pueblos of the Hopi Tribe.”
—Stephen H. Lekson, author of A History of the Ancient Southwest (SAR Press)

“For anyone with an interest in southwestern prehistory, the eloquently written Hisat’sinom is a must read. It connects the past to the present by offering multiple voices and perspectives that illustrate the varied meanings, interpretations, and values surrounding this archaeologically rich region.”
—Wolf Gumerman, University Honors Program, Northern Arizona University

“The history of the Native Americans who long ago lived around Arizona’s Sunset Crater and the Verde Valley have fascinated, and sometimes puzzled, generations of researchers and casual visitors. We are most fortunate now to have an authoritative book that general readers can enjoy, which explains what is currently known about the life and culture of these ancient peoples.”
—David Grant Noble, author of Ancient Colorado: An Archaeological Perspective and In the Places of the Spirits (SAR Press)

“SAR continues its successful Popular Archaeology series with this volume on the archaeology of the Sinagua region near Flagstaff, Arizona. I am unaware of a popular series that so effectively blends academic research with accessible writing in such a compellingly illustrated package.”
—Wesley Bernardini, University of Redland, Journal of Anthropological Research, vol. 69, no. 1, 2013