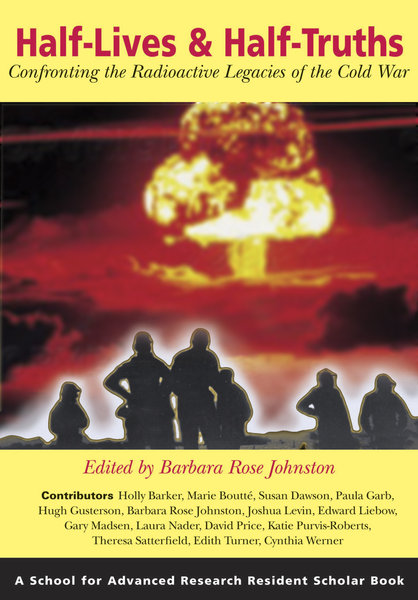 Confronting the Radioactive Legacies of the Cold War

The long Cold War of the twentieth century has ended, but only now are the poisonous legacies of that “first nuclear age” coming to light. Activists and anthropologists, the authors of this volume reveal the devastating, complex, and long-term environmental health problems afflicting the people who worked in uranium mining and processing, lived in regions dedicated to the construction of nuclear weapons or participated, often unknowingly, in radiation experiments. The nations and individuals, many of them members of indigenous or ethnic minority communities, are now demanding information about how the United States and the Soviet Union poisoned them and meaningful remedies for the damage done to them and the generations to come. As nuclear proliferation accelerates, this struggle takes on ever greater urgency.

“Half-Lives & Half-Truths: Confronting the Radioactive Legacies of the Cold War … tackle[s] issues relating to the production of scientific knowledge and the wide-ranging effects of nuclear weapons development, manufacture, testing, and proliferation.

Situated in a particularly contentious, violent, and transformative period of global history Half-Lives & Half-Truths offers significant contributions to the critical study of relationships among science, technology, and society; ecological and environmental anthropology; and the social construction of health and environment in the 20th century.

Half-Lives & Half-Truths [has] the constitution of a multisided and multi-scalar examination of science, secrets, and the socio-politics of the national security state-delivering “lessons of the past” that are particularly relevant as nuclear proliferation and conflicts continue into the 21st century.”
—Amber Huff, Ecological and Environmental Anthropology, Vol. 4, No. 1, 2008

“These cautionary tales ought to be read carefully and taught widely.

…[C]ancer spikes and contaminated food chains are not the only Cold War Legacies the contributors and commentators assess. The essays [also] scrutinize government secrecy practices-the ‘half-truths of the volume title.’”
—B. Bianco, Current Reviews for Academic Libraries, July 2008

“The fifteen contributing anthropologists explore the environmental and health effects of the American and Soviet nuclear war machine on the communities near atomic weapons and uranium mining faclities. Editor Barbara Rose Johnston argues in her introduction that rather than preventing Armageddon, as is commonly assumed, the superpowers waged nuclear war on the environment and their own people, particularly targeting minority communities with the processing of waste and fallout of nuclear testing. Since all science is rife with politics, the authors claim it is their responsibility to abandon neutral posturing and become representatives of marginalized communities. The positive result of their political activism is that they portray the victims of radiation exposure with great compassion, although some of the essays oddly devote little time to discussing their field work and show little original research.”
—Thomas Wellock, New Mexico Historical Review, Vol. 85, no. 1, winter 2010

“The world is in a perilous financial meltdown. This book addresses the industry that introduced us to that term….I remember attending a powerful speech by physician and nuclear activist Dr. Helen Caldicott. This book is a blueprint for a kind of engaged anthropology that matters.”
—Brian McKenna, University of Michigan, Dearborn, Medical Anthropology Quarterly, December 2010