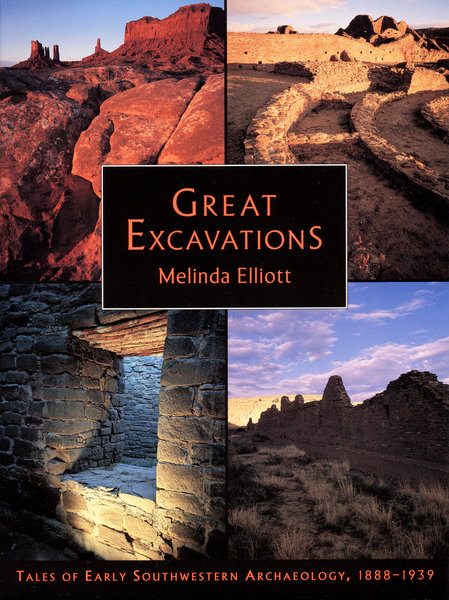 The magnificent ruins of the prehistoric peoples of the American Southwest have always been a source of wonder and awe. But the stories of the men and women who devoted their lives to the discovery and study of these lost cultures and the places they called home have never before been adequately told. Now, in Great Excavations, journalist and researcher Melinda Elliott uncovers the crucial and exciting role played by the great archaeologists of the late nineteenth and early twentieth centuries in unearthing the Southwest’s prehistoric past. With chapters on Mesa Verde, Pecos Pueblo, Aztec Ruin, Hawikuh, Pueblo Bonito, Chaco Canyon, Snaketown, Awatovi, and the Rainbow Bridge-Monument Valley Expedition.

“Never has a single book provided so much insight regarding the contemporary communities of Native Americans, their hopes, dreams, fears, and the historic contexts which shaped them. It is a masterpiece, a warm and brilliant book.”
—Gary Paul Nabhan

“This beautifully illustrated volume gives readers a renewed appreciation for the heritage and promise of Laguna and Acoma pottery.”
—Journal of the West

“[Melinda] Elliott’s study presents a fascinating armchair tour of several great excavations… This is a book worth its weight in Pueblo pottery. You will use it again and again, if you are fascinated by the Southwest.”
—Lynn Hunter Cline, The Santa Fe New Mexican, 15 October 1995

“[Melinda] Elliott’s richly illustrated and entertaining Great Excavations is fascinating for the general reader and the archaeologist… It traces the transformation of archaeology from an amateur pursuit into a scientific discipline… Anyone interested in the Southwest and its magnificent ruins will find this book an interesting account.”
—Herbert C. Morrow, Password, The El Paso County Historical Society, Vol. 41, no. 1 (Spring 1996)

“This is an extraordinarily well done documentary of an important era that I highly recommend to a wide audience including all practicing archaeologists and museum professionals.”
—Curtis F. Schaafsma, Museum Anthropology Vol. 20, no. 1 (Spring/Summer 1996)

“Enjoyable and informative, Great Excavations illuminates an era in the discovery of our southwestern heritage that is unsurpassed in excitement, adventure, and romance.”
—Kevin T. Jones, Utah Historical Quarterly (Summer 1996)

“[T]his volume is scrupulously accurate with respect to both the archaeology and the archaeologists. Written for the nonspecialist and providing an armchair tour of fifty years of field research, it also skillfully reports the gradual increase in understanding of the Southwest’s past… A generous number of illustrations make vivid ‘the way it was.’”
—Richard B. Woodbury, New Mexico Historical Review (July 1996)

“[Great Excavations] is no dry-as-dust account: it is an utterly engrossing chronicle of glorious explorations, grand adventures, breathtaking discoveries, and colorful characters… [It] is thoroughly researched, beautifully written, and handsome in both design and production. Best of all, it is enriched with numerous rare and lovely historical photographs.”
—Douglas Preston, El Palacio (Winter/Spring 1996)

“Melinda Elliot’s vivid portrayal of southwestern archaeology, from its early dates as romantic adventurism to its beginnings as a scientific profession, is fascinating and educational reading… [and] the book is beautifully illustrated with a bounty of photographs displaying the protagonists and the ancient treasures they unearthed.”
—David R. Abbott, American Antiquity Vol. 62, no. 1 (January 1997)