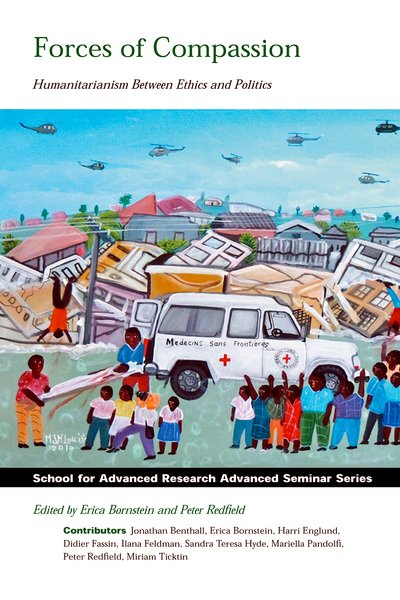 Humanitarianism Between Ethics and Politics

Suffering and charity have a long history. Both human sorrows and attempted remedies were familiar features of life in earlier eras and religious traditions. During the final decades of the twentieth century, however, natural disasters and civilian casualties of war transformed into “humanitarian crises.” In these recurring dramas presented by international media, an extensive network of interstate entities and nongovernmental organizations (NGOs) supplies assistance to victims. The contemporary aid world is a mosaic of aid sectors, each skewed slightly toward a particular aspect of need and action. The development sector focuses on alleviating poverty, while the human rights sector aims to rectify identifiable wrongs. Humanitarianism directly addresses physical and psychological suffering. The contributors to Forces of Compassion examine this sector through the lens of anthropology, looking at dominant practices, tensions, and beliefs.

“Humanitarian action is now the mission of a large field of NGOs and attracts both the money and the moral indignation of millions. Yet social science has been slow to recognize the importance of humanitarianism and also to analyze its historical and cultural roots and particularities. Forces of Compassion is among the most important books yet published for those who want to go behind dramatic images and headlines to ask why the suffering of distant strangers is compelling, why response is organized in the specific ways it is, and what unintended consequences are bundled into humanitarian action.”
—Craig Calhoun, President of the Social Science Research Council and University Professor of the Social Sciences at NYU

“Forces of Compassion represents a remarkable contribution to the subject of contemporary humanitarianism, ethics, and our discipline of anthropology…and is suggestive of paths to take in facing the challenges of the twenty-first century.”
—James Quesada, San Francisco State University

“The volume offers a balance of ethnographic case studies that reflect the diverse forms of humanitarian activities, as well as more conceptual texts that endeavor to articulate humanitarianism’s more elusive and dynamic dimensions…. With these texts, which are as provocative as they are informative, the authors have succeeded in their stated goal of generating further research and debate on the issue of humanitarianism.”
—Pierre Minn, University of California, San Francisco, Journal of Anthropological Research, vol. 68, 2012

“This collection of essays, edited by Bornstein (anthropology, U. of Wisconsin-Milwaukee) and Redfield (anthropology, U. of North Carolina, Chapel Hill), examines the relatively recent transformation of war casualties into humanitarian crises. The contributors investigate humanitarianism from an anthropological viewpoint, considering common practices and political elements such as with nongovernmental organizations. The current heavy media coverage of humanitarian crises is in stark contrast to similar situations in human history, an element which is considered throughout the essays.”
—SciTech Book News, August 2011

“This collection of ten essays opens with a lucid essay on the nature of contemporary humanitariansim; the framing question highlights the temporal specificity of the phenomenon: What is it about the present…that casts the care of strangers in such a leading role? The contributors are all anthropologists, each case is empirically grounded and focused either on events-locations, organizations, or types of humanitarian interventions. The articles are clear, engaging…. Their focus is variously theoretical, moral, empirical and political, yet they work together as an integrated whole. Topically, the articles range from local to global, although the West-East, North-South divides and gradients do not dominate. For example, one essay considers adoption in India by Indians; another studies the treatment of drug addicts in China; a third, the demonization of Islamic aid organizations…. Because the essays are critical and thought-provoking, together they are valuable for scholars, students and practitioners alike.”
—Amy Singer, Tel Aviv University, CGAP Online