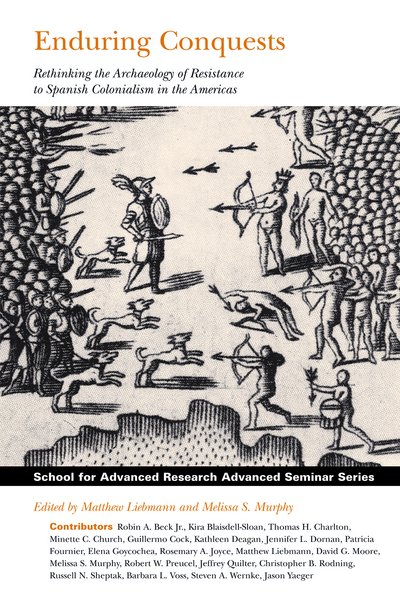 Rethinking the Archaeology of Resistance to Spanish Colonialism in the Americas

Enduring Conquests presents new interpretations of Native American experiences under Spanish colonialism and challenges the reader to reexamine long-standing assumptions about the Spanish conquests of the Americas. The contributors to this volume reject the grand narrative that views this era as a clash of civilizations—a narrative produced centuries after the fact—to construct more comprehensive and complex social histories of Native American life after 1492 by employing the perspective of archaeology and focusing explicitly on the native side of the colonial equation.

“Spanish colonial institutions of church and state, often simplistically represented in historic literature as either glorious or exceptionally cruel, were variously resisted or accepted but always endured by subaltern peoples who were themselves racially and culturally diverse. This volume brings a critical archaeological perspective to the material record of reactions and resistance of colonial subjects. While resistance to Spanish conquests and Spanish colonial policy is a starting point, interpreting resistance constitutes a problem the contributors investigate. The engaging and richly textured case studies are written by leaders in the field. Drawn from North, Central, and South America, they facilitate comparison and offer insights into the complex behaviors and beliefs that were basic to Spanish colonial experiences and that continue to resonate in twenty-first century hemispheric political dynamics. Enduring Conquests is at once a thoughtful and provocative discussion and a valuable scholarly resource.”
—Linda S. Cordell, Professor Emerita, University of Colorado

“In Enduring Conquests, Matt Liebmann and Melissa Murphy assemble a sparkling, first-string lineup of scholars who take us far beyond the bloody battlefields and the documentary accounts of the Spanish conquests of the Americas. The contributors explore the patchwork of material culture consequences, harnessing a host of innovative archaeological techniques and theoretical perspectives to lay bare the stark and sometimes grisly realities of native resistance and push back by colonists from afar.”
–David Hurst Thomas, American Museum of Natural History

“The thematically cohesive contributions to Enduring Conquests illustrate the productive synergies that ensue from a sustained dialogue among anthropologists about the past…. As a sampling of archaeological research in the Spanish colonial world, the volume represents current approaches to problems at once characteristic of the American experience and particular to regional histories…. This collection demonstrates how close attention to the archaeological and historical context allows us to get closer to the complex realities of Native lives and choices.”
—Judith Francis Zeitlin, University of Massachusetts Boston, Journal of Anthropological Research, vol. 68, 2012

“Enduring Conquests, assiduously orchestrated by Matthew Liebmann and Melissa S. Murphy, deserves [to stand the test of time] for despite its ambitious temporal and spatial sweep, its two savvy editors keep a tight rein on what their twenty contributors (themselves included) consistently deliver–pieces that turn to the archaeological record to furnish new data with which we can investigate the various ways subaltern peoples navigated their lives under the yoke of Spanish colonialism. The results, eleven substantive essays in all, are invariably rich in detail and replete with insight if not revelation, An overview, as opposed to dissection of individual pieces, must suffice…. All in all, there is much here to interest scholars of colonialism writ large. Hats off to Liebmann and Murphy, who are to be congratulated for gathering together such a coherent and engaging collection.”
—W. George Lovel, Queen’s University at Kingston, Canada, Ethnohistory, 2013