Are Human Bodies Private Property or Part of a Commons? 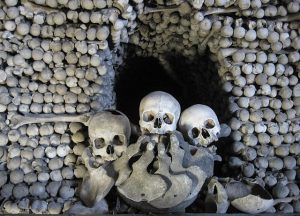 Òrla O’Donovan’s presentation, titled “The Dead Body Commons,” outlined an Irish multidisciplinary project that is addressing questions of ownership of dead bodies and whether a notion of a dead body commons can begin to reframe public thinking about rights in and to specific body parts and human remains in general. O’Donovan noted that the Irish are more comfortable with dead bodies than many other Europeans; in traditional Irish wakes the deceased are often laid out in kitchens or sitting rooms while mourners carry on around them. The devastation of the Famine in the 1840s is reflected in the presence of mass graves throughout rural Ireland, which are still thought of as a major historical injury. She also briefly discussed the case of the “Tuam Babies,” a recently discovered mass burial of infants who died at an institution for unwed mothers. 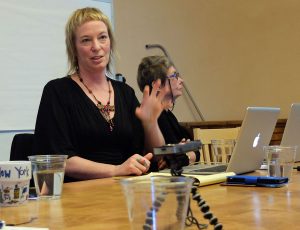 It is widely assumed, O’Donovan noted, that this and other scandals surrounding the disposition of bodies and body parts can be resolved through legislation requiring evidence of choice and individual consent underwritten by a notion of liberal individualism. She and her research project colleagues, however, feel that this vision begs important questions, including attention to the factors that shape underlying conceptions of individual rights and consent. Their goal is to shift the social imaginary associated with the dead in a new direction. They have been influenced by Derrida’s Spectres of Marx (especially the concept of “hauntings”), Laqueur’s Work of the Dead, and Anne Phillips’s Our Bodies: Whose Property? The latter work, O’Donovan said, is leading the research team to ask whether human bodies should be thought of as belonging to a commons, the obvious analogy being to traditional communal land tenure in which individuals are considered owners while they are alive to work the common land, after which the land reverts to the commons. 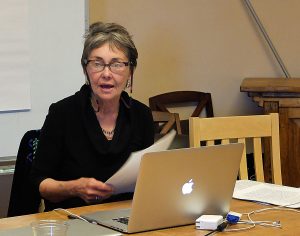 Nancy Scheper-Hughes’s presentation, “Cannibal Markets and the Tragedy of the Dead Body Commons,” developed themes she has recently explored with others in New Cannibal Markets. Her talk moved from issues of social inequality involving “voluntary” sale of tissues and organs by disadvantaged people in Brazil and South Asia to covert harvesting of organs by medical schools, a practice that has a long history that continues today in many places. The most shocking example of market-driven “cannibalism” is the documented removal of tissues and organs from the enemy dead in war zones such as Iraq and Syria. The texts and especially the images depicting these instances of “necropolitics” were not for the faint of heart.

In his discussant’s role, Les Field offered observations on links between bodies and territories—including the way that a commons may exclude a segment of the population from participation—as well as the effect of identifying anything, including human body parts, as “resources.”

In the subsequent Q and A, members of the audience raised questions about how a dead body commons could accommodate the wide range of death-related beliefs and practices found in multicultural societies. Although there is universal agreement that the “cannibalism” documented so powerfully by Scheper-Hughes is a crime, would a commons approach lead to a situation in which the needs of a wider community for transplantable body parts (hearts, corneas, kidneys, etc.) prevail over the cultural preferences of the deceased’s family or religious denomination? An illustration of the complexity of attitudes toward the dead is found in the range of responses that Native Americans have to the repatriation of ancestral remains. The American public is familiar with the many instances when tribes gratefully accept the return of their ancestors’ bones and see it as an important step toward healing past injustices. Less frequently noted are cases when communities decline to repatriate human remains. Some perceive contact with the dead to be spiritually contaminating. Others lack a traditional ritual of reburial. As a Native American elder once told me, “How can we bury these people properly when we know nothing about their family identity and the religious offices they might have held?”

This SAR colloquium reflects growing interest in death and dying in the humanities and social sciences, including anthropology. In September 2018, SAR is sponsoring an Advanced Seminar, “Death Culture in the 21st Century,” organized by Shannon Lee Dawdy (University of Chicago) and Tamara E. Kneese (UC-Davis). A report on the preliminary results of the seminar will be distributed in the SAR website after its completion.

[This post is mirrored on Michael F. Brown’s personal blog.]