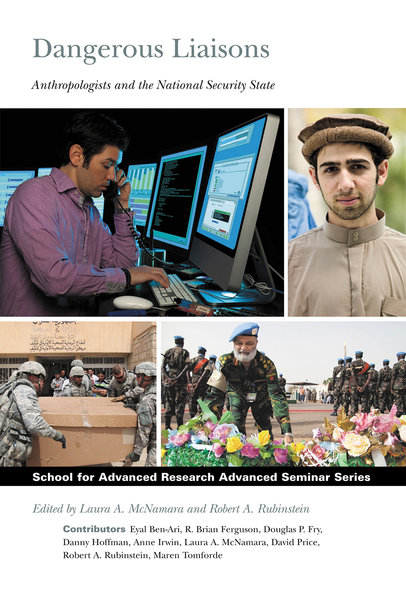 Anthropologists and the National Security State

Edited by Laura McNamara and Robert A. Rubinstein

Dangerous Liaisons is a book about intersections. It is a product of two year’s worth of discussion among a group of ethnographers from four different countries studying war, violence, the military, and the state. Throughout the first decade of the twenty-first century, anthropologists have watched with both interest and concern as government agencies — particularly those with military and intelligence functions — have sought their professional assistance in understanding terrorists’ motivations, stabilizing nascent wartime governments, and countering insurgencies.

“Under the auspices of the School for Advanced Research, Professors McNamara and Rubinstein have assembled a diverse and provocative collection of essays by leading researchers and practitioners in anthropology in the U.S. and abroad, examining the prospects and pitfalls of collaboration with military and security forces in contexts ranging from the Israeli and Canadian Defense Forces and German Bundeswehr, to the U.S. African Command (AFRICOM) and ongoing counterinsurgency efforts in Iraq and Afghanistan. Balanced, thorough, and critical, Dangerous Liaisons suggests how delicate is the equipoise between the quest for scientific knowledge and the seduction of political power. Several of the essays and historical case studies illustrate how seriously awry such collaborations can go, even granted the very best of intentions. These thoughtful and timely meditations deserve careful reading by those concerned both to defend the independence and integrity of scientific research, as well as to better understand the moral constraints that guide acceptable scientific and professional practice.”
—George R. Lucas Jr., Class of 1984 Chair in Ethics (U.S. Naval Academy) and Professor of Ethics & Public Policy (Naval Postgraduate School), author of Anthropologists in Arms

“Dangerous Liaisons provides a well-nuanced, full-spectrum dialogue on a difficult and charged issue. This alone makes it unique; many books addressing contentious issues are polemics, battles among opposing ideas/ideologies. This book moves beyond those battles to a greater maturity in scholarship where deep exploration of all facets of an issue are presented. One of the most refreshing aspects of Dangerous Liaisons is that these many approaches, however charged the issue, are presented respectfully.”
—Carolyn Nordstrom, Notre Dame

“There has been a surge of interest in the anthropology of military institutions in recent years, and this book helps relieve the scarcity of texts that those working in this area can turn to for guidance, insight, and legitimation. But Dangerous Liaisons‘ audience is not limited to specialists: the questions of ethics, positioning, and institutional mechanisms will speak to anthropologists of medicine, development, and humanitarianism, as well as to those working in the many parts where daily life is shaped by local and international military entities.”
—Ken MacLeish, Anthropos, 2013