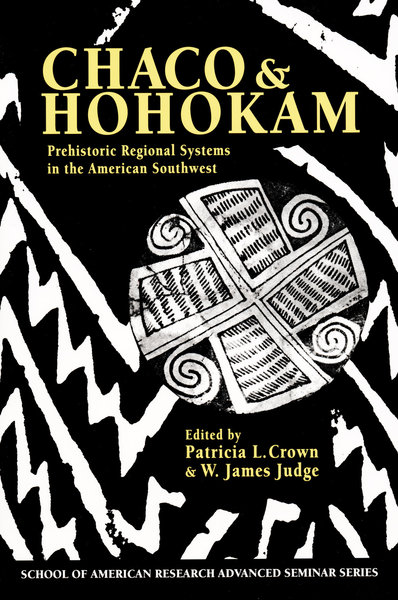 Synthesizing data and current thought about the regional systems of the Chacoans and the Hohokam, eleven archaeologists examine settlement patterns, subsistence economy, social organization, and trade, shedding new light on two of the most sophisticated cultures of the prehistoric Southwest.

“Chaco & Hohokam … is clearly a pacesetting book with appeal for many who find the state of Southwestern archaeology anthropologically interesting…. I commend this book to readers of prehistory. It clearly sets forth the state of current knowledge of the Chacoans and the Hohokam.”
—Steadman Upham, American Indian Culture and Research Journal Vol. 16, no. 2

“If you would learn about computer simulations of ancient water use or of dragging timbers out of the mountains, about turquoise, macaws and mosaic mirrors, consult the book and its imposing list of 500 studies!”
—Scientific American (November 1990)

“This is an ambitious, important, and admirably well edited and coherent work….It should be read by anyone who wishes to know of Chaco and Hohokam, or to take the measure of contemporary Southwestern archaeology.”
—Christian E. Downum, American Anthropologist 94, December 1992

“In essence, the volume succeeds in synthesizing and presenting in a coherent manner large amounts of recently collected data on two cultural phenomena of the American Southwest. The individual papers represent some of the best statements on various topics related to Chaco and Hohokam studies.”
—Jeffrey H. Altschul, Anthropos, vol. 88, no. 4-6, 1993

“Chaco & Hohokam provides the Southwestern scholar with an insightful comparison of two of the more important regional developments in that area’s prehistory. Scholars who work outside of the Southwest will enjoy the volume both because of the synthesis it provides and because it illustrates the tenor of, and theory in, current debates about Southwestern prehistory.”
—Randall H. McGuire, Man Vol. 28, no. 1 (March 1993)

“This volume contributes to our understanding of Southwest prehistory…In this interplay…comes an increased appreciation for two very different Southwest cultures as well as the evolution and changing nature of complex societies.”
—Douglas R. Mitchell, American Antiquity, vol. 58, no. 2, April 1993

“This volume makes many contributions to southwestern archaeology. It provides syntheses of important issues in both Chaco and Hohokam and pulls together data from inaccessible ‘gray literature.’ It also provides a much-needed comparative perspective on two regions, and it explores the concept of a regional system. The book is most worthwhile and should be on the shelf of every southwestern archaeologist.”
—Michelle Hegmon, Ethnohistory Vol. 40, no. 1 (Winter 1993)